Michelle Barrientes-Vela and Marc Garcia have been under criminal investigation since May 2019. 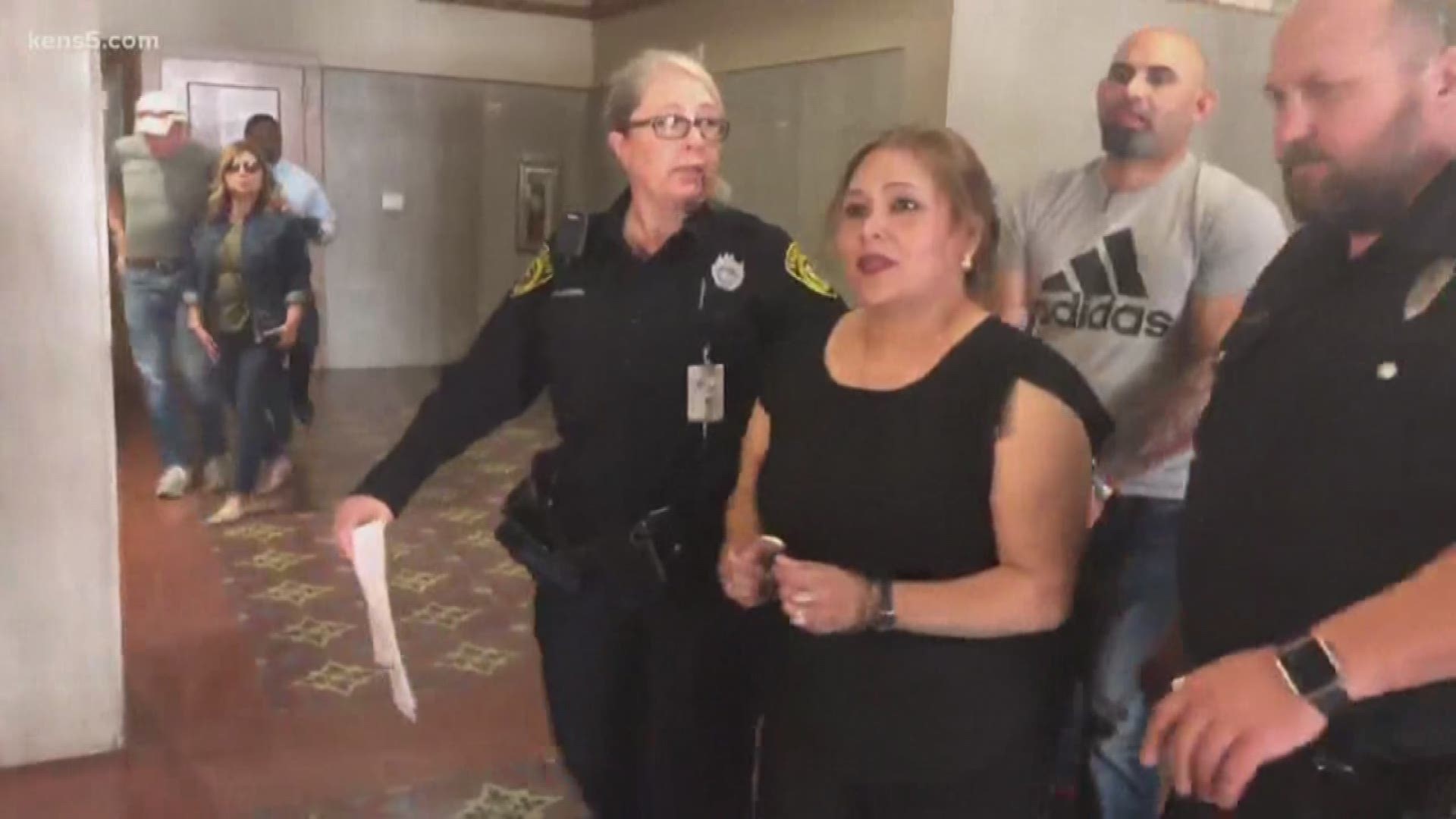 Garcia was also indicted on criminal charges, one charge of aggravated perjury, and three charges of official oppression.

Vela has since bonded out.

“After a thorough investigation by the Texas Rangers, with the assistance of the FBI, the Bexar County District Attorney’s Office reviewed the evidence that was submitted to us and then presented this case to the Grand Jury. The Grand Jury determined that there was probable cause that crimes were committed and returned true bills of indictment against former Constable Michelle Barrientes Vela and former Captain Marc Duane Garcia. Since these cases are pending, we can make no further comment,” said Bexar County District Attorney Joe D. Gonzales on Thursday afternoon.

A search warrant obtained late last year stated she, along with other high-ranking officials in Vela’s office, was suspected of committing official oppression, tampering with evidence and perjury.

This comes exactly four months after investigators with the Texas Rangers and FBI raided the Precinct 2 Constable’s office on Gilbeau Road on Sept. 23.

Vela’s former chief deputy Anthony Castillo and Lieutenant Jeremy Miner also named in the warrant as suspected parties, however it's unclear if they remain under criminal investigation.

Vela, in a Facebook live posted nearly two weeks ago, said, “there’s a rumor going around in the county jail that they’re going to indict me and my chief. And I thought, ‘Wow, how are you going to indict me? What is this about?'”

Vela’s last day in office was Oct. 2, days after she told KENS 5 of her intention to run for Bexar County Sheriff. That declaration invoked the so-called "resign-to-run" provision of the Texas Constitution, the Bexar County District Attorney's Civil Section Chief wrote in an opinion. She reportedly has raised $1,630 in her campaign for sheriff.

A spokesman for the Precinct 2 Constable's office said Thursday that the agency will confer with the District Attorney's Office for an opinion and will move forward once they know their options.

Court documents state officials with the Texas Rangers office launched an investigation into Vela on May 9, just days after she had her employee and former political challenger, Leonicio Moreno, arrested on aggravated perjury charges. The charges were dismissed by the Bexar County District Attorney’s office hours later.

Prior to Moreno's arrest, the warrant states Vela "made several inquiries" about the status of another case involving Moreno. Vela, according to the warrant, wanted the separate case to be prosecuted by the Attorney General's Office instead of remaining under the District Attorney's Office's control.

Authorities said that Moreno was arrested shortly after those inquiries by Vela.

The warrant gives a timeline of incidents involving Moreno, starting with allegations from August 2017 in which Vela touched Moreno while in a hot tub on a work trip in Galveston. The timeline goes on to show how Moreno received oral counseling for gossiping while on lunch, demoted from acting chief to lieutenant and received verbal counseling for failing to complete TCOLE duties, the warrant states.

The timeline states that in 2018, the disciplinary actions and allegations continued with Vela in January 2018 accusing Moreno of falsifying government documents. Moreno was served with a proposed dismissal from the office the following month and later won the appeal of his termination in June 2018.

Moreno returned to work where further disciplinary actions were taken against him for incidents including failing to properly check a public restroom, for not responding to an alarm that later turned out not to be an alarm and for failing to write a report about escorting someone out of the courtroom, the warrant states.

In January, Moreno took the first steps toward running for Pct. 2 Constable and appointed a treasurer. In the month after that filing, Moreno called in sick and a welfare check was ordered which resulted in Moreno's firearm being confiscated by Miner, because Moreno was under "mental-stress," the warrant states. The next month, Vela ordered a fitness for duty evaluation for Moreno.

In March, Moreno filed a complaint with the Equal Employment Opportunity Commission and in April, Vela was served with a notice that Moreno and former Deputy Constable Christopher De La Cerda were suing her based on allegations she violated their first and fourteenth amendment rights.

Garcia, the warrant states, told Vela that they should take the case to the District Attorney's Office for review, to which Vela responded, she needed "something to happen now."

The warrant points out the allegations in Moreno’s arrest affidavit were unfounded, including that Moreno’s EEOC complaint interfered with office operations. The warrant went on to state that officials found no evidence Vela, or anyone in her office, had been threatened, as she has repeatedly claimed in press conferences.

When Moreno was arrested, deputy constables were instructed by Miner to delay his booking so that members of the media could gather and capture his arrest, the warrant states.

After news outlets ran reports about the delayed booking, the deputy constables told officials they were called in and questioned about the booking and that Miner denied telling them to delay the booking, the warrant states.

According to the indictments, Vela and Garcia's aggravated perjury charges stem from the warrant obtained to arrest him.

"The false sworn statements were material to such proceeding in that it caused District Court Magistrate Michael Ugarte to sign the warrant of arrest for Leonicio Moreno," the indictment reads.

Vela and Garcia were also charged with official oppression in connection with Moreno's arrest, along with allegations they encouraged or participated in the harassment, discrimination or retaliation against De La Cerda.

Clerk was told Pct. 2 officials would 'visit her in jail' if Rodriguez Park paperwork wasn't in order.

The warrant states Jesus Reyes arrived at Rodriguez Park for an Easter celebration and found Vela occupying the pavilion he rented. He confirmed his reservation, the warrant states and had Vela move.

Vela and Castillo returned to the pavilion, telling Reyes he had to pay $500 for security, which is something he'd never had to pay before, according to the warrant. Reyes agreed to pay $300 and was told he had to leave by 7 p.m.

Reyes filed a complaint with the Sheriff's Office, telling investigators he agreed to pay the money "because he felt intimidated by (Vela) and (Castillo)."

In June, Vela's office received a subpoena for records related to the Rodriguez Park incident. A clerk who handles the records called investigators worried that she would be implicated in the investigation, the warrant states.

She said when they received the initial request for records, Vela took them home and removed the cash logs, according to the warrant. She said that Vela instructed her to replace the records with a spreadsheet that eliminates the names of the officers working security and instead includes a number of officers.

According to court documents, the clerk told investigators Vela told her to tear out the receipt for Reyes "so no records existed" regarding the park incident.

The records state that the clerk felt Vela was acting fearful after the subpoena.

The warrant states that the clerk also handed over documents that were not given when the office received a subpoena for them. The clerk told investigators she made copies after she was asked to sign an "absence of business records affidavit."

Vela's  tampering with evidence charges stem from allegations she "altered, destroyed, or concealed a record or document," in connection with the Rodriguez Park incident.

A receipt for property states that officials confiscated or imaged several electronics and seized documents relating to a Leon Valley incident, Rodriguez Park and Moreno.

According to an inventory sheet, officials seized the reservation and payment schedule for Rodriguez Park from September 2018. Officials also confiscated a counseling form dated for July 19, in the same line item, investigators have quoted "shred documents related to Rodriguez Park," though it's unclear if anyone from the office was instructed to do so.

The inventory sheet also states that four case reports were also confiscated, along with personnel reports for Miner, Vela, Garcia and Moreno.