New video shows a DPS Trooper communicate that the suspect at the center of a manhunt appeared to be unarmed just minutes before the 2017 shooting.

SAN ANTONIO — The family of a 6-year-old boy who was fatally shot by deputies days before Christmas in 2017 is now calling on Bexar County to settle a lawsuit connected with his death, documents obtained Thursday by Eyewitness Wants to Know revealed.

Kameron Prescott, 6, was shot twice as Bexar County Sheriff's Deputies chased down, shot and killed a fugitive sought by bounty hunters and deputies.

In a 16-page letter sent to county commissioners late last month, attorneys for Prescott's father and mother, Christopher and Rubi Prescott, laid out what they had discovered since filing suit against the county, writing that while they are "confident in our case," the Prescott family is "willing to accept, at this time, a fraction of what a jury would likely award as damages." 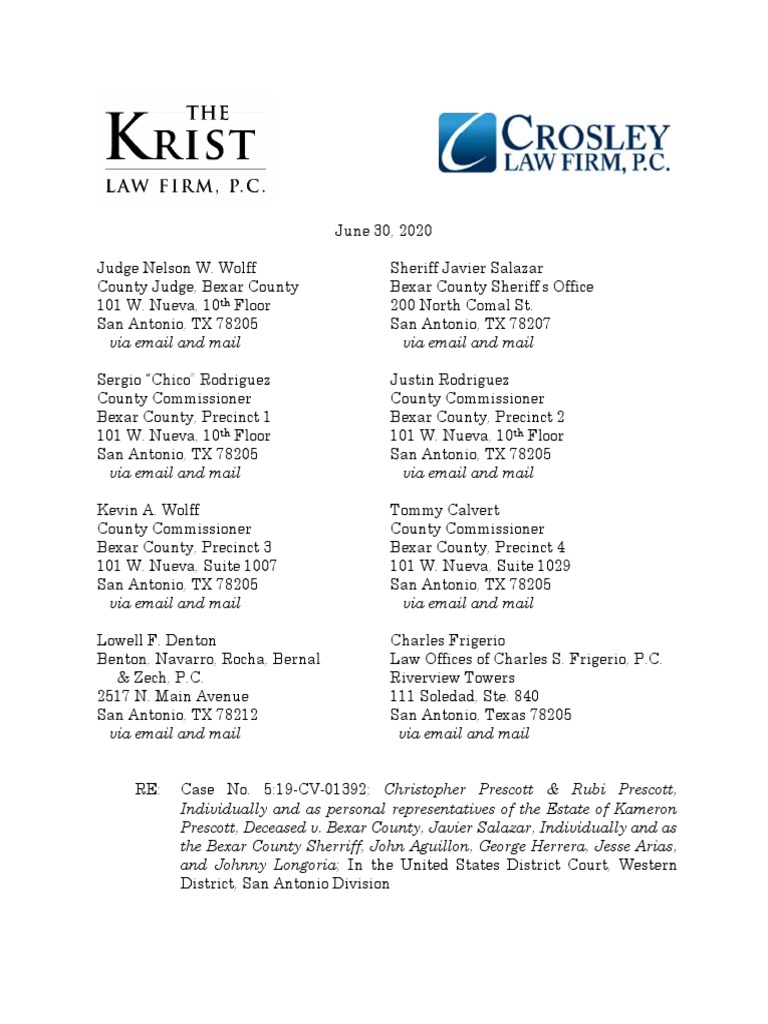 The letter contains new details about the moments leading up to Prescott's death, including that a DPS trooper had informed responding officers they did not see firearms on the suspect, Amanda Jones, moments before deputies on the ground shot her.

In the immediate aftermath of the shooting, Sheriff Javier Salazar said deputies suspected Jones was involved in a vehicle burglary, prompting the pursuit. But the lawsuit states that it was actually a bounty hunter that alerted deputies to the fact that Jones was in the area. Jones was wanted on fraud and credit card abuse warrants.

"What we had was a case where a call from a bounty hunter led to a two-hour police chase of a non-violent suspect, and it resulted in that suspect fleeing and standing in front of a mobile home where there was a child's bicycle on the porch and a car in the driveway and a 6-year-old boy playing inside that had nothing to do with this police chase," said Tom Crosley, an attorney for Kameron Prescott's father, Christopher Prescott. "And deputies in this case fired 20 rounds from assault rifles. And one of those rounds killed this innocent young child."

Attorneys for the Prescotts allege in the letter that a deputy's claim Jones was armed and had pointed a gun at him ultimately set off the extensive manhunt. The letter states that deputy recanted after the deadly shooting, stating he never saw a gun and instead "closed his eyes and flinched" when Jones ran past him.

More than two dozen deputies, K-9s, drones and a helicopter joined the search upon the deputy's claim. The search came to a head at the Pecan Grove mobile home park, where Kameron Prescott lived with his father.

Court documents state Jones walked into Christopher Prescott's home and that he immediately told Jones to leave the house, to which she responded, “you have kids and I do not want trouble.”

As she turned to leave Christopher Prescott’s home, she was fired on by deputies John Aguillon, George Herrera, Jesse Arias and Johnny Longoria. The lawsuit states that deputies briefly stopped firing after Jones slumped and fell forward, but opened fire again. The report states deputies fired at least 18 rounds.

Immediately preceding the gunfire, DPS helicopter video shared with Eyewitness Wants to Know shows a trooper helicopter radioing to deputies down below that they could not see any weapons on Jones, only noting that she kept grabbing her hip.

KENS 5 has blurred Jones's body out of the video and has stopped the video prior to when Kameron Prescott is carried out of the trailer by deputies.

The letter states Kameron Prescott was in his room wielding a light up toy sword when he was hit by two bullets.

"Here's what I would say to to the citizens of our county: What do we expect from our law enforcement when they make a mistake? When they make a colossal mistake that results in shooting and killing a 6-year-old boy who's playing in his own bedroom?" Crosley said.

Christopher Prescott told KENS 5 late last year the last words he heard his son utter were "ouch daddy, ouch." Deputies, he said, placed him in handcuffs and hauled his son off to a hospital where he later died. The letter states the toy Kameron Prescott was toting prior to the gunfire was found near his blood, still blinking.

The letter alleges deputy Longoria, who opened fire, was not up to date with training requirements, and that Herrera's body camera was turned off during the shooting while Arias and Longoria did not have a body camera at all. The letter states that there is also no body camera footage depicting the alleged encounter that set the manhunt into motion.

The letter also states deputy Longoria swore under oath he saw smoke coming from Jones's gun, though Jones was unarmed and investigators have never recovered the object deputies claimed she was holding when she tried to exit the trailer.

The letter offers questions, including: "why did it escalate to this? Why did a bounty-hunter-initiated event result in the death of a child in an entirely different neighborhood? Why did our deputies (who were the only people that actually had guns) end up firing twenty rounds at an unarmed person and an obviously-occupied mobile home—a structure that would provide no meaningful resistance to gunfire? Does the County really believe almost twenty rounds fired at an occupied home was 'only the amount of deadly force necessary?'"

Eyewitness Wants to Know reached out to Salazar for an on-camera interview late last year to discuss whether any changes had been made following Kameron Prescott's death. He declined, citing ongoing litigation.

"While we cannot comment specifically on this case due to ongoing litigation, training hours have increased dramatically since December 2017," the sheriff's office said last year in a statement.

It's unclear if the county intends on settling the lawsuit. However, court records show the county has filed a motion to dismiss the suit stemming from Kameron Prescott's death and not Jones's death.

"They're taking the position that because they didn't mean to shoot Kameron, they really meant to shoot this woman, and that because he was an innocent bystander, they shouldn't be held responsible for causing his death," Crosley said. "We think that's a ridiculous position for the county to take."

Crosley said it's not about money for the families. They want to see sweeping changes to the Bexar County Sheriff's Office's practices and procedures.

"We expect our county officials to listen and to do the right thing," Crosley said.

In the aftermath of Kameron Prescott's death, Christopher Prescott moved out of his home, unable to bear the thought of staying there. The Christmas presents that he purchased for his son that year he said he finally gathered the strength to donate nearly two years later.

"The presents stayed wrapped about a year and a few months," Christopher Prescott said in an interview last year. "I would say just recently, at the beginning of this year, I was able to actually go through the presents and either donate them to Toys for Tots or donate them to other children around his age that were his friends."

Every year, the Prescott family also purchases school supplies that they would've purchased for Kameron Prescott and donates the supplies to Kameron's old school.

"Make memories with your child. You never know how quickly or how long you'll have with them," Christopher Prescott said through tears in an interview last year. "I learned that the hard way. I made memories every chance I got. Those are the memories I have to live with. That's all I get to live with, is the memories of my son."

RELATED: No charges for BCSO deputies in fatal shooting of 6-year-old bystander in Schertz