With this week's wheel heist being the second in less than a year at a San Antonio-area dealership, KENS 5 did some research on what the black market looks like for high-end wheels. 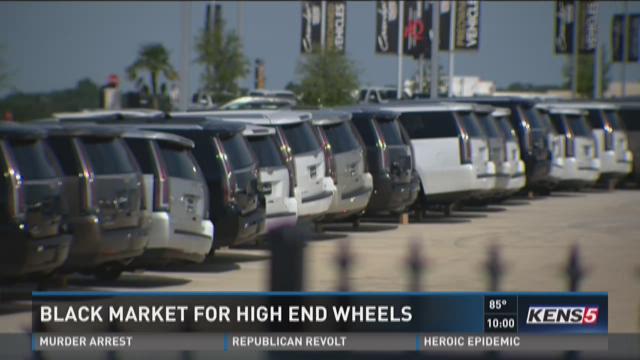 Tuesday night KENS 5 told you how, for the second time in less than a year, a local auto dealership was hit by wheel thieves getting away with hundreds of thousands of dollars’ worth of tires and rims.

It left us wondering more about the black market for high-end wheels.

It’s the biggest theft to hit Live Oak in at least two decades. In all, 160 wheels were stripped from 40 cars and SUV’s at the Live Oak Cadillac dealership late Saturday night.

On Wednesday, police confirmed that the suspects in the case used a large Penske truck to haul the wheels off, just like the crooks that hit 45 vehicles at a Chevy dealership in Leon Valley back in November.

KENS 5 went to Gil’s Tire to learn more about high end wheels. Gil, the owner, said that whomever the thieves are, they’re selling them for about $1,500 to $2,000. That’s about half the price of a brand new set.

Gil noted that stolen wheels could end up sold in Mexico, other states, or even online. However, it’s almost impossible to know if the wheels are stolen, or not.

“The bad part about the original wheel equipment, there's no serial numbers so they're really untrackable,” Gil said.

“If they're doing this, they probably have some sort of means of selling them or getting rid of them so they're not hanging on to them for awhile, and they're probably moving along the state,” Lt. Malone said.

And while the dealerships can easily replace what’s stolen, that’s not always the case for countless car owners who find their vehicles on blocks. Gil said that he gets customers that come into his shop on a weekly basis looking for new tires and rims because theirs were stolen.

He also said that he recommends people have insurance in case they do have their wheels stolen. He’s been told by insurance companies that Texas is ranked No. 1 when it comes to stolen vehicles.