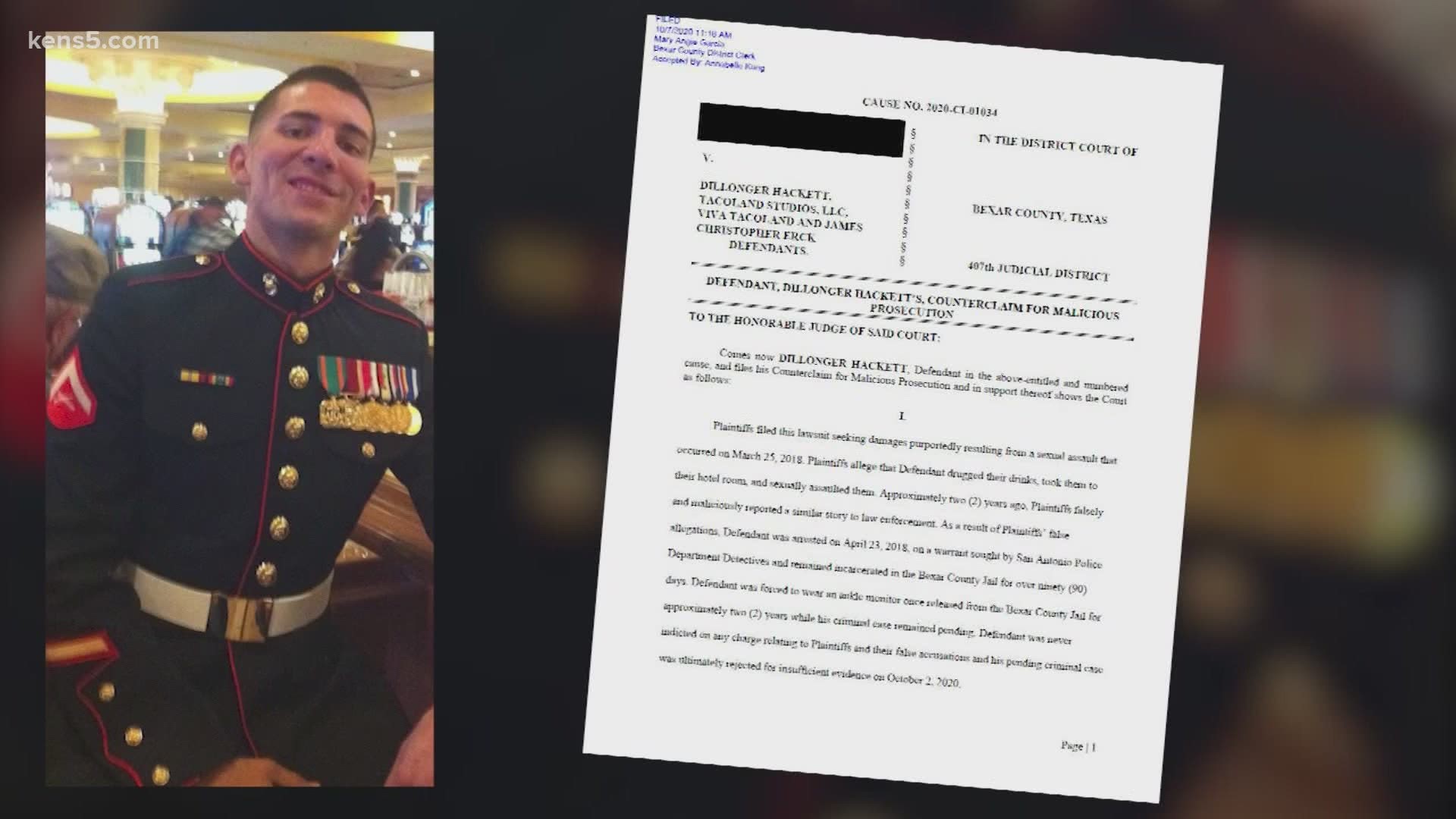 SAN ANTONIO — A man who was arrested in 2018 amid allegations he drugged and sexually assaulted two women whom he served while working at Viva TacoLand is now suing his accusers after the criminal charge was dismissed earlier this month.

Dillonger Hackett was arrested in April 2018 after a woman and her girlfriend told officers Hackett drugged their drinks at Viva Tacoland where Hackett worked as a bartender. One of the women told police she woke up in their room at Hotel Emma and recalled Hackett sexually assaulting her.

Hackett spent more than 90 days behind bars before he was released under a provision of the law which calls for the release of individuals whose cases have not been presented to a grand jury within 90 days from when they are arrested. Hackett initially hired now-Bexar County District Attorney Joe Gonzales to represent him in the criminal case, but when Gonzales was elected and took office, special prosecutor Brian Powers was appointed to prosecute the case independent of Gonzales’ office.

Hackett, his attorneys said, was required to wear an ankle monitor for the two years following his release. The years of awaiting trial ceased in early October when Powers dismissed the sexual assault charge against Hackett, citing insufficient evidence.

Records show the case was never presented to a grand jury for consideration. Powers, in an email, told KENS 5, "sexual assault as written under Texas law, can be a difficult case to prove beyond a reasonable doubt. The evidence in this case at this time was not sufficient to present to a grand jury for indictment.”

Meanwhile, Hackett’s attorney Angela Tabares, said, “This was completely sensationalized from the beginning.

Tabares, an associate at Cesar Ornelas Law, alleged there was hotel surveillance video that depicted Hackett and the two women “completely coherent, entering the hotel, being very friendly with each other, hugging each other.” She added that, through the criminal case, it was revealed the women did not have drugs in their system after toxicology screens were performed.

Tabares said the law firm was unable to share any of the evidence it obtained through the criminal case with KENS 5. Powers also declined to share whether toxicology reports showed neither had been drugged.

While Hackett is no longer facing criminal charges, the two women also filed a civil lawsuit against Hackett, the restaurant and others following his arrest.

Days after the criminal charge were dismissed, Hackett’s attorneys filed a counterclaim alleging his accusers made "baseless, unfounded, false and malicious accusations” against Hackett. He is seeking between $200,000 and less $1 million in damages.

Tabares said since Hackett's release, he has been kicked out of restaurants and apartments, has been sent death threats and was recently kicked out of a room rental which he obtained ahead of a funeral.

"As a former prosecutor who worked on sexual assault cases, and as somebody who believes in the #MeToo movement in general, I think the default is: Yes. To believe women,” Tabares said. "But when you have all of this evidence that is just telling you, screaming that the opposite happened, that's when you have to start asking questions and look at, ‘Why is this person here two years later?' Still, his liberty being restrained, his life being ruined, based on these baseless lies by these two women.”

National data shows between 2% and 10% of sexual allegations can be categorized as false reports. Tabares said she could not speculate on any motivation to make a false report.

Clint Glenny, the attorney for the two women, declined an on-camera interview with KENS 5 Thursday afternoon saying he would not litigate the case in the news. He said the counterclaim was an intimidation tactic and that his clients would not back down from their case.

Glenny said he looked forward to presenting the case before a jury, noting the legal standards in civil court are different from those set forth in criminal cases.