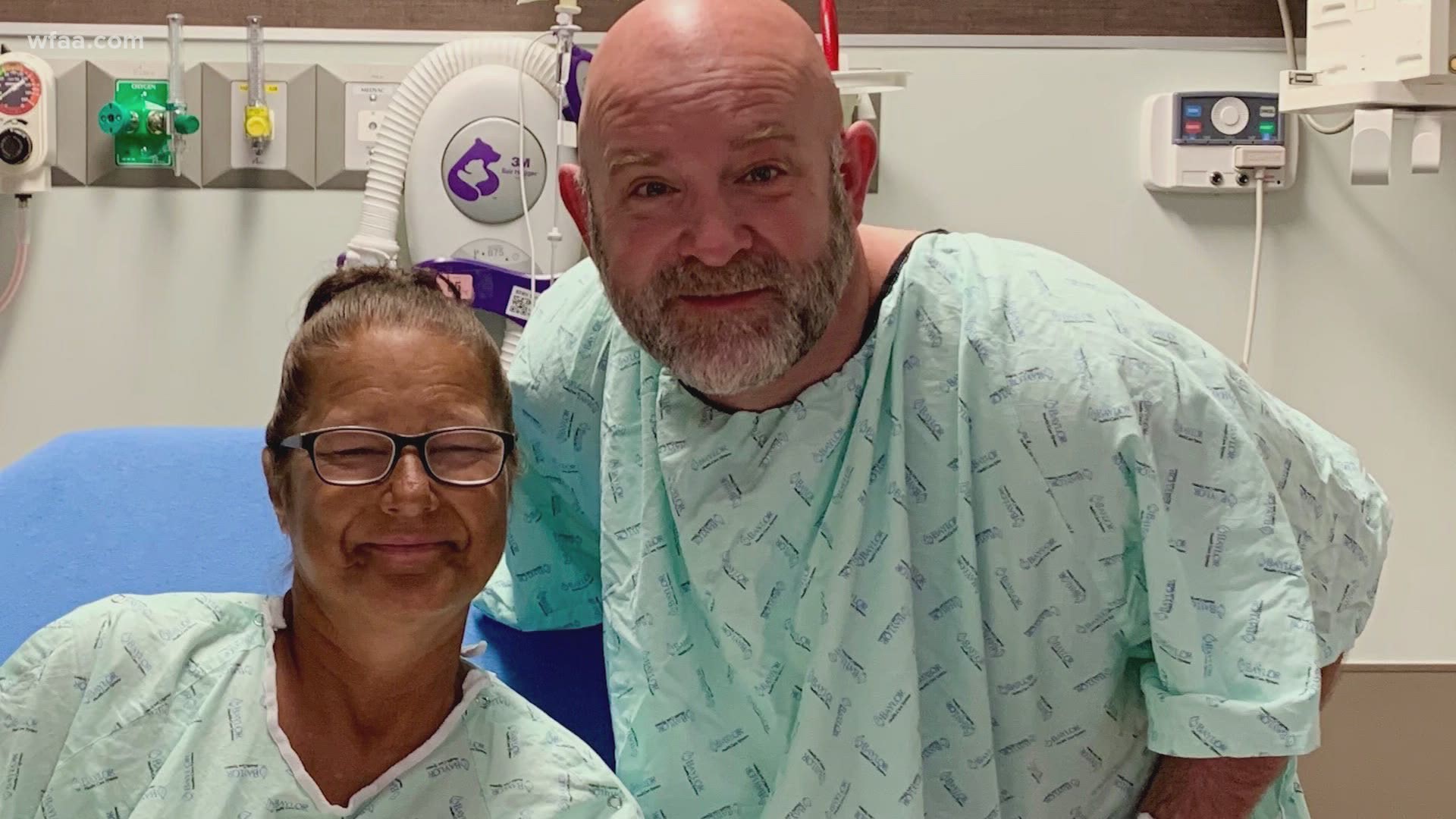 CELINA, Texas — Surgeries and procedures delayed for several weeks due to the COVID-19 pandemic have resumed at places like Baylor Scott & White, completing the journey for a north Texas elementary school receptionist and the parent of a student who agreed to help save her life.

"You know some days are better than others," said Sandra Danielson, 51, the front office receptionist at Celina's Lykins Elementary School.

"I was on dialysis for five years," she said of the congenital birth defect that would eventually lead to the necessity of a kidney transplant.

"I'm going to try to get through this without crying," she said as we discussed her story over a remote video call. "But I can't promise you because without Brian and my faith in God, I wouldn't be here today."

She's talking about Brian Roach, the dad of a 5th grader at Lykins Elementary.

"She's a warm person," he said of Danielson. "Extremely friendly. Always has a smile on her face."

And in the six years his daughter has gone to the elementary school, Roach and his wife learned more about Danielson's kidney problems and her need for a transplant donor. A few friends and acquaintances through her church and school had offered, but not of them were a match.

"You know when God calls, you don't let it go unanswered," Roach said.

So he started asking questions and contacted Danielson's doctors.

"There was zero anxiety, zero hesitance," the 46-year-old said of the medical tests that came next. "When someone is in need, you help."

And months ago, when school was still in session, Roach  walked into the school office with a bouquet of flowers.

"And he goes, 'we're a match,'" Sandra recalled. "And I lost it. Lost it. It was amazing. There wasn't a dry eye in the office there."

And two weeks ago, on the day before the surgery, Celina gave them both an hour-long drive-by parade. Family and friends, and elementary school parents and students drove past with signs wishing them and the doctors well.

"The kidney donors who choose to donate are a really special breed of person," said Dr. Gregory McKenna at Baylor Scott & White Health, who performed the transplant.

Transplants, with the help of a living donor, were deemed "elective" surgeries during the early weeks of the pandemic in an effort to make sure that medical supplies, including sufficient quantities of protective equipment, were available to emergency personnel on the front lines of the COVID-19 fight.

"Although they are emergency surgeries, they are still kind of elective surgeries that can be delayed," McKenna said. "A short delay was kind of acceptable and that was the situation with her."

"There's something special about a smaller town where everybody knows everybody," he said of the altruistic offer by Roach and multiple other people in Celina. "You know everybody who is in need when you're in a small town."

And from this small town, the offer of an elementary school parent worked. The surgery, performed on May 5, was a success.

Both Sandy and Brian say they are feeling well and are on the mend.

"I was the lucky one," Roach said. "Our families have grown closer because of all this. And I think this has developed a life-long bond."

"I'm the lucky one. I am," Danielson interjected during a group video call. "Besides just friends, we're family. We're family."