Some businesses in Downtown Austin board up before Election Day

The boarded-up businesses are located between Eighth and Ninth streets. 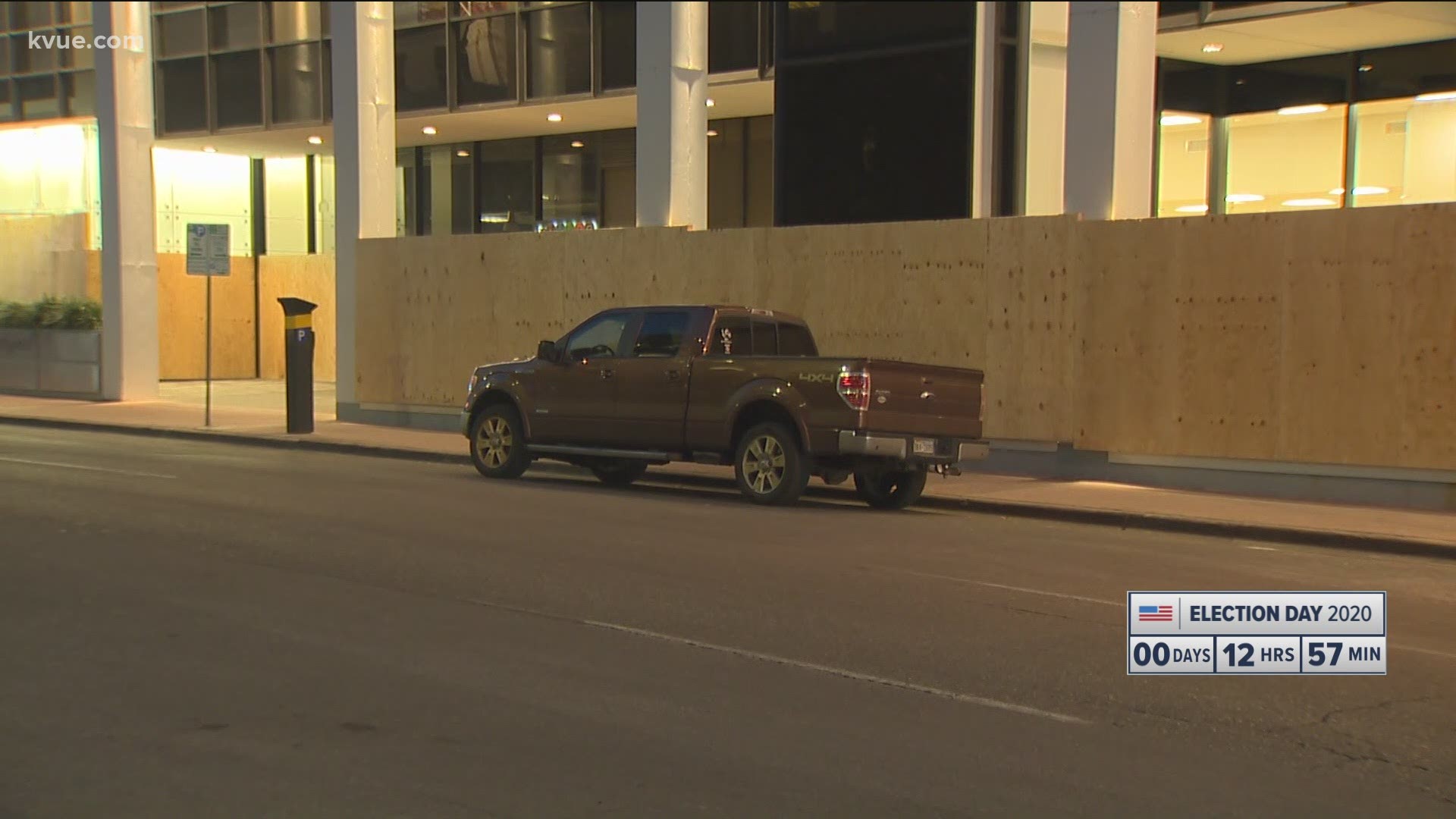 AUSTIN, Texas — Some businesses in Downtown Austin are boarding up the windows of their storefronts as a precaution before Election Day.

On Nov. 2, the day before Election Day, KVUE's Luis de Leon spotted some businesses on Congress Avenue in Downtown Austin putting up plywood over their windows. An employee at the 7-Eleven, as well as workers who were putting up the plywood, told KVUE the preparations were taking place in case of anything happening downtown after the Election Day results.

The boarded-up businesses are located between Eighth and Ninth streets. De Leon reported that the businesses are all next to each other on the same block under the 823 Congress building.

1 / 3
Luis de Leon, KVUE
Businesses boarded up their storefronts ahead of Election Day in Austin.

Around Downtown Austin, several businesses have been boarded up for a while due to closures from the pandemic or in preparation for the protests that occurred over the summer.

Over the weekend before Election Day, similar scenes were reported in major cities across the U.S., such as Washington, D.C., and New York City, according to the Associated Press. Dozens of business in downtown areas are being boarded up to prepare for possible unrest as a result of the presidential election results.

"We never had to ask anyone to leave. Police were never summoned," said Travis County Clerk Dana DeBeauvoir on whether or not there have been any issues at the polling locations. "We heard a lot of sort-of threats and, you know, some, some ugly talk, but nothing ever came of any of it. Voters should just ignore all the talk. Go vote at your favorite place, something that's convenient for you, and do the one thing that you can do as a voter to support your democracy."

This week, members of the Austin City Council asked the Austin Police Department for clarity on the public safety plan if protests happen after Election Day on Nov. 3.

RELATED: How Austin is preparing for Election Day

APD's assistant chief said the department has no plans to add additional officers but will be ready if needed, while the Travis County Sheriff's Office's public information officer said they will be fully staffed and ready to go.

"We need the public to know and the public to hear from our police chief that he is going to do everything in his power to ensure that our rights are protected," Councilmember Jimmy Flannigan said.

Flannigan is one of the council members asking for clarity on APD's public safety plan for election week. He said there hasn't been an official response, but he's confident Austinites will exercise their rights in a peaceful way.

"I am still hopeful that the chief will put out more definitive and clearer responses so that the public is equally confident," Flannigan said.

Once the polls close on Nov. 3, KVUE will keep track of the 2020 election results here. Mail-in ballots that are postmarked before Nov. 3 can be received by local elections offices by 5 p.m. the day after Election Day, so mail-in ballots in Texas are expected to take longer to tally.

Be sure to download KVUE's app to get updates as they come in: kvue.com/app. On the KVUE app, you can customize the type of content you would like to be notified about and see the most, including election and voting information. Find out how to customize KVUE's app here.

WATCH: Tallying up votes in Texas: Ballot counting and security