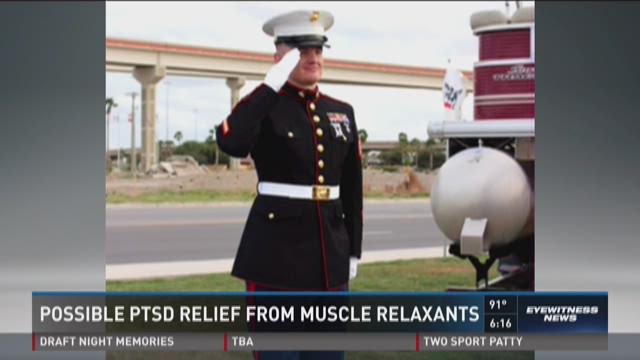 SAN ANTONIO -- Doctors are calling a new method an exciting step toward treating Post Traumatic Stress Disorder, a disorder that affects as many as eight million adults during a given year, according to the U.S. Department of Veteran Affairs.

Now, an old pill with a new use is being tested in San Antonio.

His symptoms first surfaced after he served during the surge in 2007.

"I started to get depressed a little bit," said Bratton.

The symptoms kept growing as he was deployed two more times and then volunteered to go to Afghanistan.

"All the combat and stress, and all the things that came with that deployment kind of pushed me over the edge," said Bratton.

"In this particular study, we were looking for patients who were either military or first responders," said Dr. Harry Croft.

Dr. Croft works for the Clinical Trials of Texas that is a part of a nationwide study using an already approved muscle relaxant.

Doctors cut the dosage and put the medicine under the patients tongue, so the medicine goes directly into their blood stream.

"It blocks one of the receptors that we think sometimes has to do with some of the symptoms," said Croft.

"I noticed change within about a week. I feel better about myself. The anxiety started to subside," said Bratton.

Researchers are hoping it enters the next phase of testing by the end of the year.

Mark is already using it as an opportunity to start a conversation.