A recent report from the American Hotel & Lodging Association says only 37% of hotels in the country have brought back at least half of their employees. 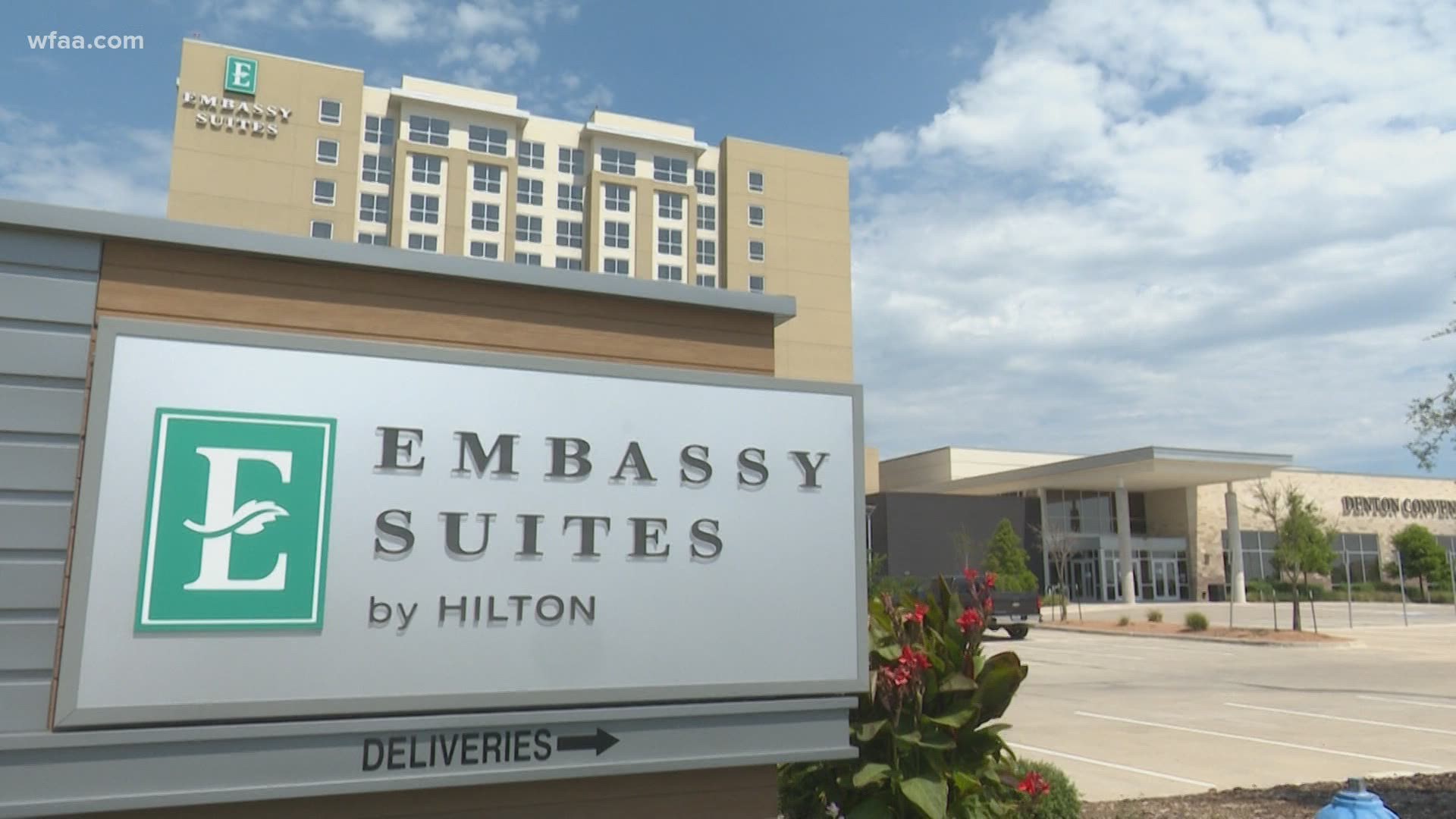 DENTON, Texas — Hotel occupancy in the Dallas-Fort Worth area is expected to drop by about 46.6% in 2020 compared to 2019, according to commercial real estate firm CBRE.

That would be about $3.8 billion in lost revenue.

The projections do show hotels getting back to normal occupancy and revenue but not until 2023 or 2024.

In Denton, only about 30% of the regular staff at Embassy Suites is currently working. It is a 70,000 square-foot building that works as both a hotel and convention center.

General Manager Jeff Pritts says it was even worse for Embassy Suites in mid-March. He cut his staff from 175 down to 15 in only a couple weeks.

He said he has had to cancel reservations from large groups that have been in place for three to five years.

"Our business demand is a rollercoaster," Pritts said. "There's really this grey area with all future events, and we canceled things through even the second quarter of next year."

A recent report from the American Hotel & Lodging Association says only 37% of hotels have brought back at least half of their employees.

Pritts said he had to juggle a hard balance of figuring out exactly who to keep on staff. He needed people to handle the day-to-day tasks while also leaders to help lead the hotel back to normalcy.

Many of the people he let go full-time he is trying to keep part-time as the demand for hotel rooms fluctuates month to month.

"Some of the people we kept weren't people who had been here the longest but the people who could do the most things," Pritts said. "My most immediate goal is to survive 2020."

Many hotels in the area are trying to quickly adapt.

There are currently 20 hotels in Dallas looking to get GBAC (global biorisk advisory council) Star certified.

In order to be GBAC Star certified, properties must implement both engineering and procedural controls. Some examples include:

The Dallas Tourism Public Improvement District has committed to funding the program for all hotels in the district. In July, the Westin Galleria was the first to achieve the accreditation.

Pritts said his hotel has lost $4.5 million in revenue so far in 2020 and is projecting another $6 million through the rest of the year.

He says trying to forecast how to staff and plan ahead is nearly impossible.

"There is nothing," Pritts said. "We want to get as much business as we can get and watch every penny we can to stay open."

The Hotel Association of North Texas resources on its website, including Small Business Administration's Economic Injury Disaster Loans and some new insurance options.

You can find more information at hantx.org/coronavirus.