San Marcos officials were alerted of the Biden campaign event in the city 24 hours in advance. 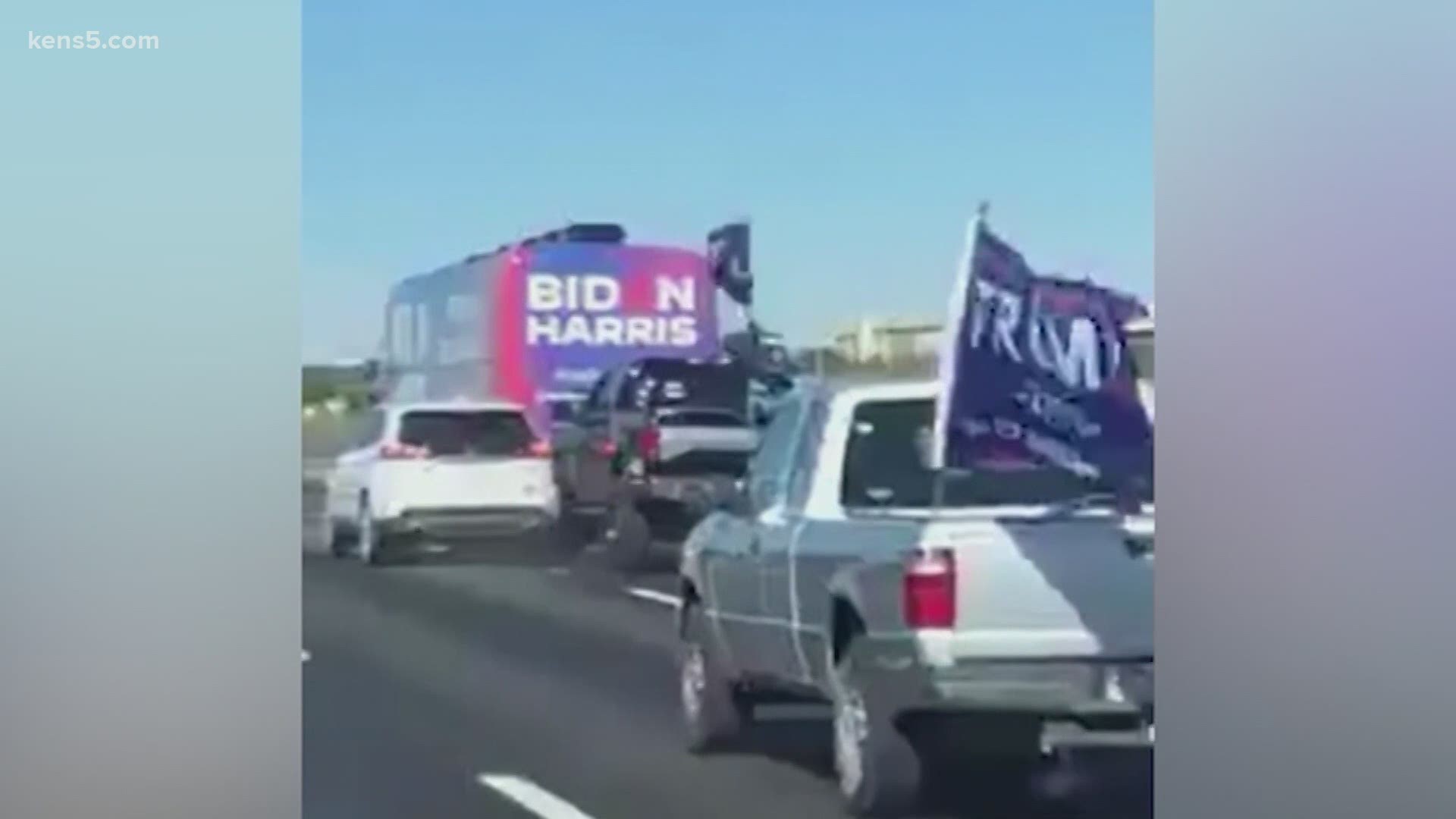 She called again the next day to report the dozens of cars and trucks with Trump flags surrounded the campaign bus on Interstate 35, creating a so-called “Trump Train” that led to a minor collision and an FBI investigation.

But San Marcos police never made it to the scene.

Prewitt, a former City Council member, said in an interview with The Texas Tribune that she called Chase Stapp, San Marcos’ director of public safety, on Friday and said that the bus was 30 minutes away from the event location in San Marcos and was being followed by 50 or so vehicles with Trump flags.

“I let [Stapp] know what was going on and [asked] if we were going to be receiving San Marcos [Police Department] backup, and I was reassured once again that would happen,” she said. “We never did see any law enforcement from the county nor the city show up to assist the Biden bus.”

A spokesperson for the city of San Marcos said police responded to requests to assist the bus, but traffic prevented officers from catching up before the bus left the city limits. The campaign had decided to cancel the San Marcos event and drive straight through to Austin because of the caravan behind the bus.

Stapp said in a statement that Prewitt never specifically requested a police escort or said the “Trump Train” was causing issues on I-35.

“With the exception of the two phone calls to me from Ms. Prewitt, at no time did anyone from the campaign request assistance from the San Marcos Police Department in advance of the event so that the request could be evaluated and prepared for,” Stapp said in a statement.

The confrontation, which garnered national attention, came just a few days before a contentious presidential election, as Democrats close ground in a state that is polling like a potential battleground in the race for president. Law enforcement agencies in at least four major cities, including Austin and San Antonio, have said they are planning for potential unrest around the election.

Prewitt said she expected that when she reported the activity, San Marcos police would respond with an escort for the bus and officers waiting at the site of the destination.

“I would assume that knowing the political atmosphere, knowing what was already taking place along the corridor, they would have also had police officers and county sheriffs available, too, to ensure things like that car accident didn’t happen and endanger all the lives of people on the highway, as well as people in the Biden campaign bus,” she said.

The Biden campaign did not respond to multiple requests for comment.

San Marcos city officials said they had staff available to assist at the event, but they did not respond to requests for additional details about how many officers attempted to respond to the incident on the interstate.

At least one elected official accused police of playing politics ahead of Tuesday’s election.

“People are very troubled by what’s going on, especially ... with this election and the idea that we’re going to have mass upset and civil unrest,” said Hays County Judge Ruben Becerra. “Then we have law enforcement charged with protecting us already taking sides.”

“They must have felt that they had it under control for the event in the city, but when the caravan kept heading north, it changed the dynamics tremendously,” Gutierrez said.

But Becerra said it’s disturbing that the sheriff’s office did not know of the event because the agencies share radios.

“If we had one sheriff’s department vehicle moving through with them, just one vehicle, none of this would have happened,” he said.

President Donald Trump has defended the drivers of the “Trump Train.” He argued they were “protecting” the bus and “being nice” when they slowed it down on the highway, according to media reports from a Sunday campaign rally in Michigan.

Meanwhile, U.S. Rep. Lloyd Doggett, D-Austin, condemned the Trump supporters’ behavior, and State Rep. Terry Canales, D-Edinburg, sent a letter to the Texas Department of Public Safety asking the agency to open an investigation into the “multi-county, criminal behavior on I-35” and “use the full weight of its resources to hold these criminals accountable.”

San Marcos police confirmed they’re working in cooperation with the FBI to provide information pertaining to the agency’s investigation.