Jody Kuchler and Thania Sanchez are the couple who were out on Highway 83 and captured cell phone video of the white pickup truck that was weaving erratically prior to crashing into a First Baptist Church of New Braunfels bus in Uvalde County killing 13 people. 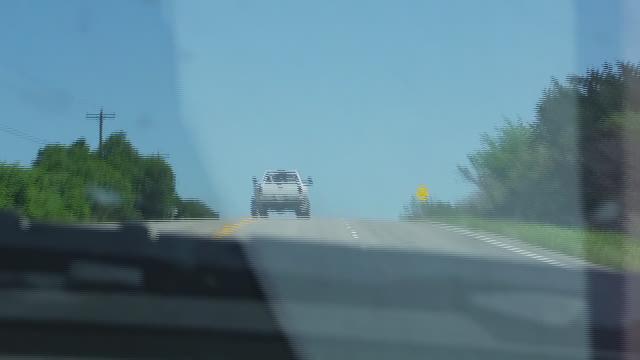 Jody Kuchler and Thania Sanchez are the couple who were out on Highway 83 and captured cell phone video of the white pickup truck that was weaving erratically prior to crashing into a First Baptist Church of New Braunfels bus in Uvalde County killing 13 people.

Here is their eyewitness account in their own words:

Kuchler: We were outside of Uvalde, about three miles. We were on Highway 83 North. We caught up to him. We noticed he started drifting off to the side of the road and he got in the grass and then he came back up on the road.

A little further down the road, he drifted over into the oncoming traffic. That's when Thania suggested we call the Uvalde Sheriff's Department. She dialed the number and I reported the white Dodge pickup driving all over the road.

About five minutes later she started videoing him. He kept going off the road and into oncoming traffic. There was a couple of cars and trucks that actually got off on the shoulder to keep from being hit.

We got to about Reagan Wells. She suggested we call the Leakey Sheriff's Department, so I did. I told him we were following a white dually pickup that was driving all over the road, off the road, into oncoming traffic and they needed to get somebody out there to get him off of the road before he hit somebody.

The dispatcher's response to me was "It's not Real County."

That's my complaint. If he would have dispatched somebody right then, this probably could have been prevented. The dispatcher is the one that I think did not do his job.

We got out past Beck's RV Park on 83 and there's a curve past Beck's. This dually started drifting over into the oncoming traffic, and that bus was coming around the curve and the driver of the bus moved over on the shoulder but there's a guardrail there. There was nowhere else he could go and the truck hit the bus head on in their lane.

When he hit the bus, I pulled over to the side of the road. Thania went the opposite direction to start stopping traffic from coming around the curve. I ran to the bus. I told them 'Just hang on, help's on the way.'

After that I went to the driver of the truck. He was caught in the floorboard. The steering wheel was kind of against him. I guess his legs were caught down there because he couldn't get up. He asked me if I could help him and I said “Son, do you know what you just did?” And he said, “I'm sorry. I'm sorry. I was texting. I'm sorry.”

KENS 5: Did he express remorse about this?

Kuchler: No ma'am. He wasn't crying. He wasn't. He was just wanting somebody to help him.

KENS 5: Was he conscious the whole time?

Kuchler: He was conscious the whole time, yes ma'am.

KENS 5: You were there. Other first responders were there. Was there some praying going on and comfort going on?

Kuchler: Everybody that was there, all the EMS, all the police officers, the highway patrol. They done everything right. I've had some of the guys say, out of 20 years of doing this job, they've never seen anything this horrific. Some of them are taking counseling now because of what they had to deal with.

My only complaint about the whole ordeal was this could have been prevented.

KENS 5: Is it safe to say you will remember this until you die?

Kuchler: Yes ma'am. I can still hear the crash of the vehicle when he hit the bus. I can still see everything in slow motion. When you see people like that, I mean, they didn't do nothing wrong. They were just in a bus. They just left a Baptist retreat for the weekend and they were on their way home.

There was a husband and wife in there that I heard they made a comment one time that when they died, they wanted to die together. So that's what they got. They got their wish on that day.

First Baptist Church of New Braunfels has set up a relief fund for the victims of the crash, which you can find here at their official website.