The NTSB released a final report on the church bus crash that killed 13 people in Uvalde County. It says that drug abuse and a lack of proper belts contributed to the deaths. 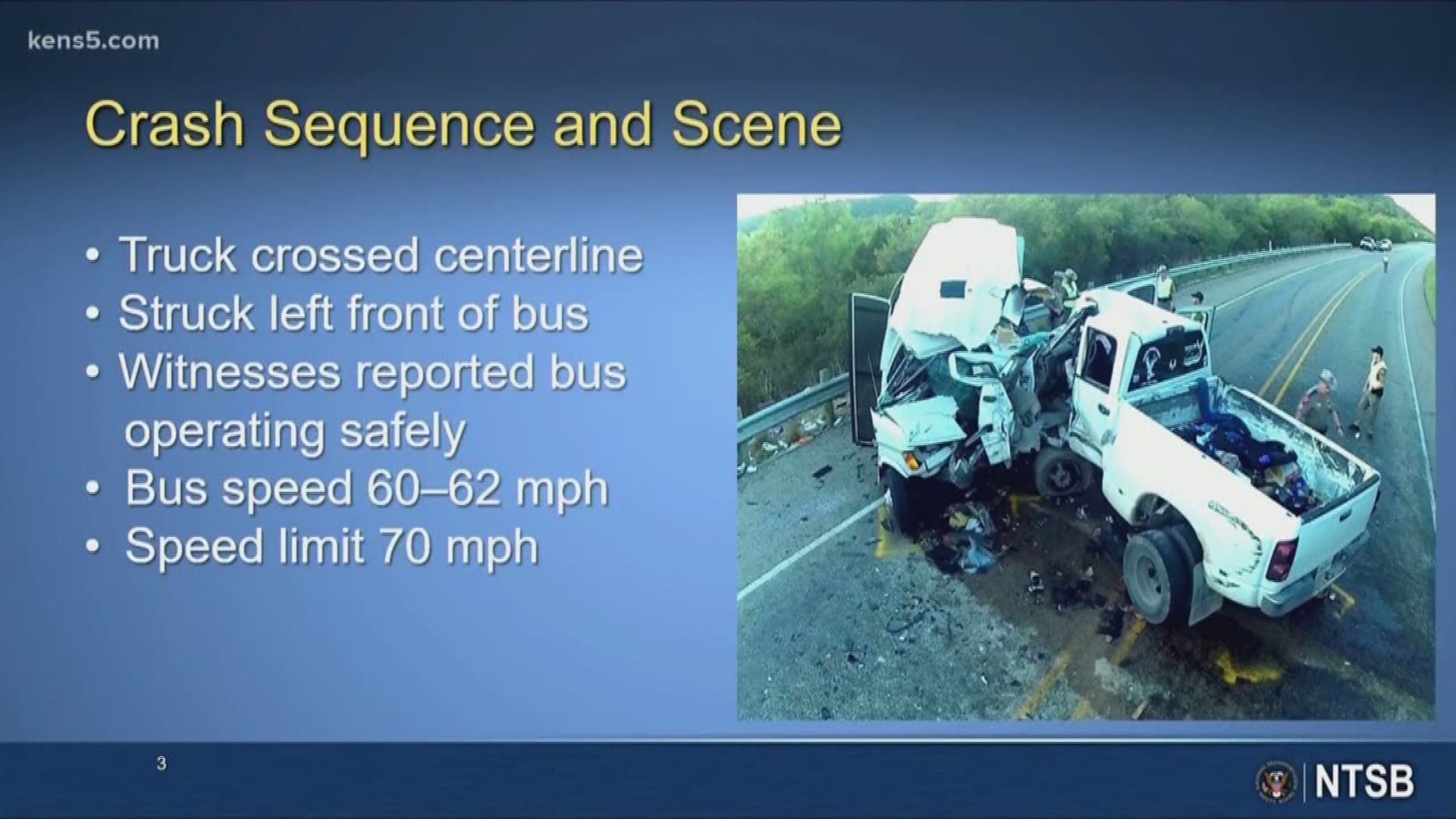 The National Transportation Safety Board released its final report Tuesday on the bus crash that killed 13 members of a New Braunfels church near Concan 18 months ago.

The report concludes that drug abuse and lap belts were the two most important factors that contributed to the high death toll.

In his opening remarks, NTSB Chairman Robert Sumwalt said that widely-viewed cell phone video of the minutes leading up to the crash was a big help in confirming what went wrong.

“He crossed the center line 19 times, 19 times, and drove onto the right shoulder 35 times in the 15 minutes leading up to the crash," Sumwalt said of the pickup driver.

The full report is more than 800 pages and, in sometimes excruciating detail, NTSB members at Tuesday’s public meeting heard about all the major factors that led to so much heartache on an isolated stretch of Highway 83 in Uvalde County.

The report concludes that cell phone use by the driver of the pickup that caused the crash was not a factor.

The report concluded that drug abuse was a far bigger factor.

"The driver in this crash made terrible choices with tragic consequences, but the rising tide of drug impaired driving did not begin with this driver," Sumwalt said.

NTSB staff member Dr. Nicholas Webster told the group that the driver of the pickup had the prescription drug Clonazepam and marijuana in his system at the time of the crash. Webster said the driver was not taking his prescription medication as directed, and the combination of the two drugs worked to enhance the driver’s level of impairment.

Board vice chair Bruce Landsberg said that as more states are allowing the recreational use of drugs, rules for the definition of impairment must keep pace.

"We really seem to have an epidemic here of increasing impairment problems,” Landsberg said.

Another deadly factor: the presence and use of lap belts only. The report suggests that if the rear seat passengers on the bus had lap and shoulder restraints, some of them might have survived.

NTSB staff member Ronald Kaminski told the board that medium-size buses are now outselling full-size motor coaches at a 5:1 ratio and that passengers in smaller vehicles deserve the same level of protection as people on larger vehicles.

David Rayburn said that the board staff studied the history of the road and found that the accident rate at the crash location was low. Rayburn said that in the previous six years there had been only one fatal accident in the six-mile stretch that includes the crash scene, and that was an incident in which a single vehicle simply ran off the road.

"I know it won't be easy to get to zero impaired driving deaths, but at least we can agree to make the goal a decrease in fatalities, not an increase," Sumwalt said.

Jack Dillon Young, the pickup driver, pleaded no contest to 13 counts of intoxication manslaughter. The sentencing phase of his case is scheduled for the first week of November.

Here is a link to the YouTube page where the hearing is posted in its entirety.