Cadets unable to attend in-person curriculum will be eligible for the next cadet class. 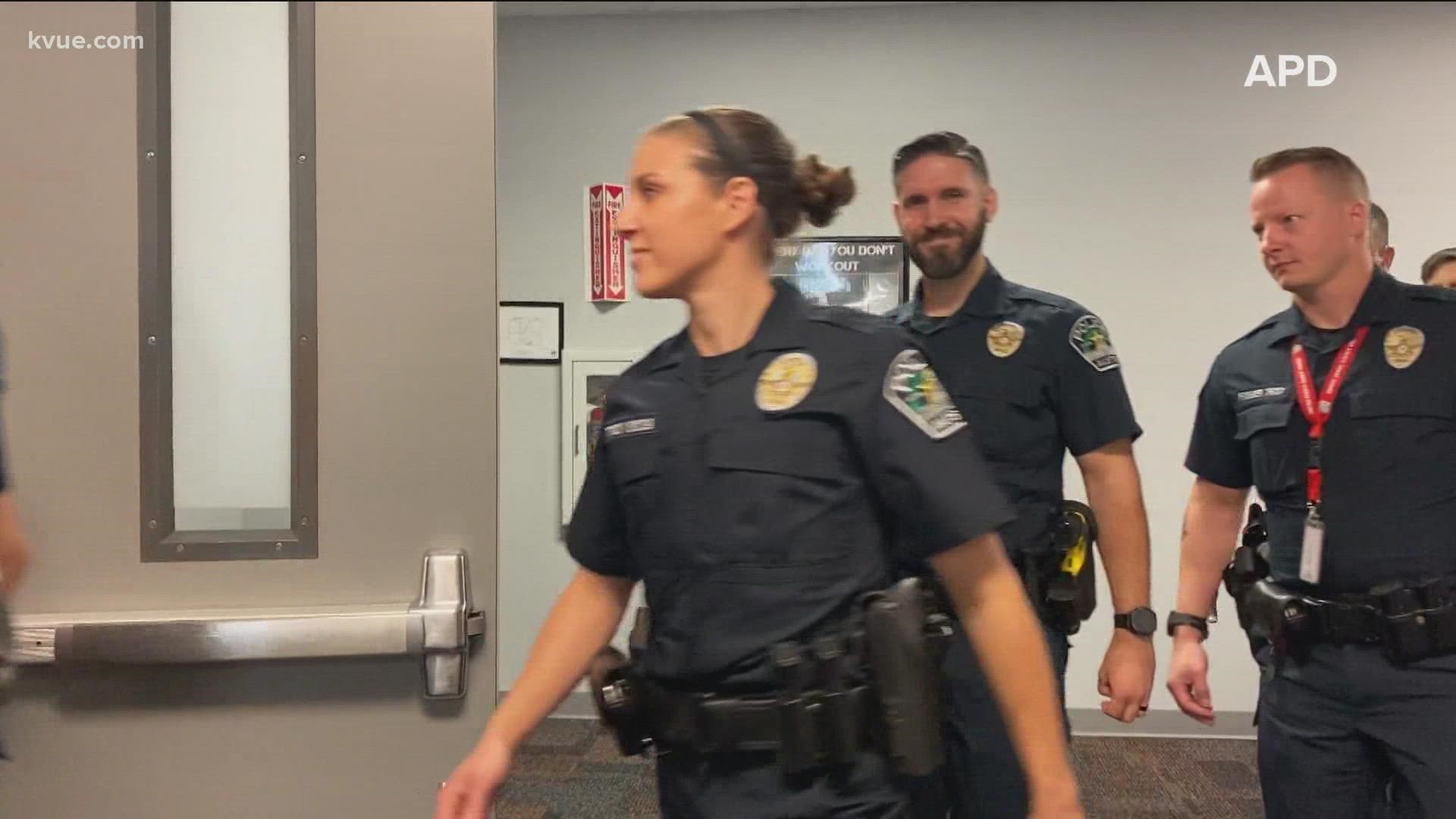 AUSTIN, Texas — On Tuesday, the Austin Police Association (APA) released a statement to the media claiming that Austin Police Chief Joseph Chacon made an "unconscionable decision" to fire two cadets because they tested positive for COVID-19.

When reached for comment on Friday, the Austin Police Department confirmed that the cadets were not fired. Instead, they resigned and are eligible for the next cadet class.

On Wednesday, APD said 100 cadets started the academy, and there are 82 still currently in the program. Of the 18 who are no longer cadets, eight resigned for reasons related to injuries or illness.

"We will be looking at rehiring those eight," APD Chief of Staff Troy Gay said. "In the future, we haven't come up with that process but we are looking at that. To me, that is a commitment on our level that we really do want to take care of our employees, and they went through a long process and a rigorous process and testing process to get on with this department, and they're part of our family, and we want to take care for them."

APD said it is aware of its staffing shortage. It is planning to change requirements for future cadets so if they have to miss a week for an injury or illness they can continue on in the process, even if it is with the next class.

Right now, cadets that have an injury or illness to a point "where you can't continue in the academy" must resign or be terminated.

The APD's full statement can be read below:

The Austin Police Department (APD) is aware of our current staffing challenges and strives to retain and graduate as many qualified cadets as possible. Our Academy staff make every effort to work with cadets who have missed class due to injury or illness. Due to the academy’s training structure, it is not always possible to provide additional time necessary for the cadets to complete the requirements needed to graduate.

While earlier parts of the academy curriculum could have been completed virtually, we are now at a stage of training that requires in-person and hands-on tactical application. We are disappointed any time a cadet is unable to complete the academy.

No cadets have been fired due to injury or illness, but instead have resigned knowing they are eligible to attend the next scheduled academy class. The department is committed to supporting our police cadets and looks forward to them serving as law enforcement officers to create a safer Austin for residents and visitors.

According to APA President Ken Casaday, the cadets are required to test on a routine basis during their 34 weeks of training. He also said two other cadets' statuses in the academy are also being considered after testing positive.

"Chief Chacon’s decision not to support these cadets comes just over a month after our department lost seasoned officer Sgt. Steve Urias and Senior Police Officer Randy Boyd to COVID-19," Casaday said. "Our officers and cadets need leadership who will support them in these situations, not punish them for circumstances beyond their control."

The APA said the cadets involved include two women and two men. All four are either military veterans or former police offices from another agency.

“It has been a common practice over the years for the department to work with cadets that get injured or have medical issues during their months-long training academy experience,” Casaday added. “Recruiting and retention are extremely important and firing these cadets is sending a clear message to potential recruits that APD leadership doesn’t really care about them.”

In the media release, the APA states that both Austin-Travis County EMS and the Austin Fire Department have been able to work around the issue of quarantining cadets while also keeping them employed and in their respective academies.

On Oct. 7, the APA released the following statement:

"The Austin Police Association (APA) is grateful the department heard our concerns and is making an effort to follow our recommendation they retain cadets who, despite following COVID protocols, tested positive for the disease. Though we are glad a process is being discussed, unfortunately, it is coming after multiple cadets have already been forced to quit the academy.

"What remains a disappointment is that the City chooses to play games of semantics when the future of our department and the lives of future officers are at stake. APA President Ken Casaday said 'It’s not much of a choice when a cadet is told they can either quit or the department is going to fire them. The only hope they have to come back is if they ‘resign’ as the department likes to say.” These cadets picked up their lives in other areas or states and moved to Austin to be a part of our community – and now the department is telling them they are on their own.'

"Austin Travis County EMS and the Austin Fire Department both have had cadets test positive for COVID and they managed to find ways to work with cadets to complete their current academy without the need to “recycle” them to another academy class. The Houston Police Department also confirmed they have been able to do the same. This begs the questions: why is it that every other public safety agency in Austin and other police departments in Texas, have been able to overcome these challenges without having to recycle cadets – but APD cannot? The City had plenty of time to prepare for the reimagined academy and provide contingency plans for cadets who contracted COVID-19 and were mandated to quarantine.

"We know that our academy instructors and staff are doing everything they can to train and keep qualified cadets, but the decisions made by executive staff are hindering their hard work.

"The time has come for Chief Chacon and Chief Gay to stop making excuses, stop trying to argue semantics to distract from the real issues, and to show their current and future employees – as well as this city – that they have a vision and a plan as to how to lead this department. The APA continues to stand ready and willing to help develop a program that keeps qualified cadets employed so we can address the critical staffing shortage we face."

The 144th academy kicked off in June with 100 cadets under a reimagined curriculum. The next round of cadets is set to begin academy on Feb. 14.

'I think we're going to be OK,' mayor says in response to COVID-19 concerns at ACL