The meeting was meant to serve as a "briefing on protests in the city, including protocol and practices employed." 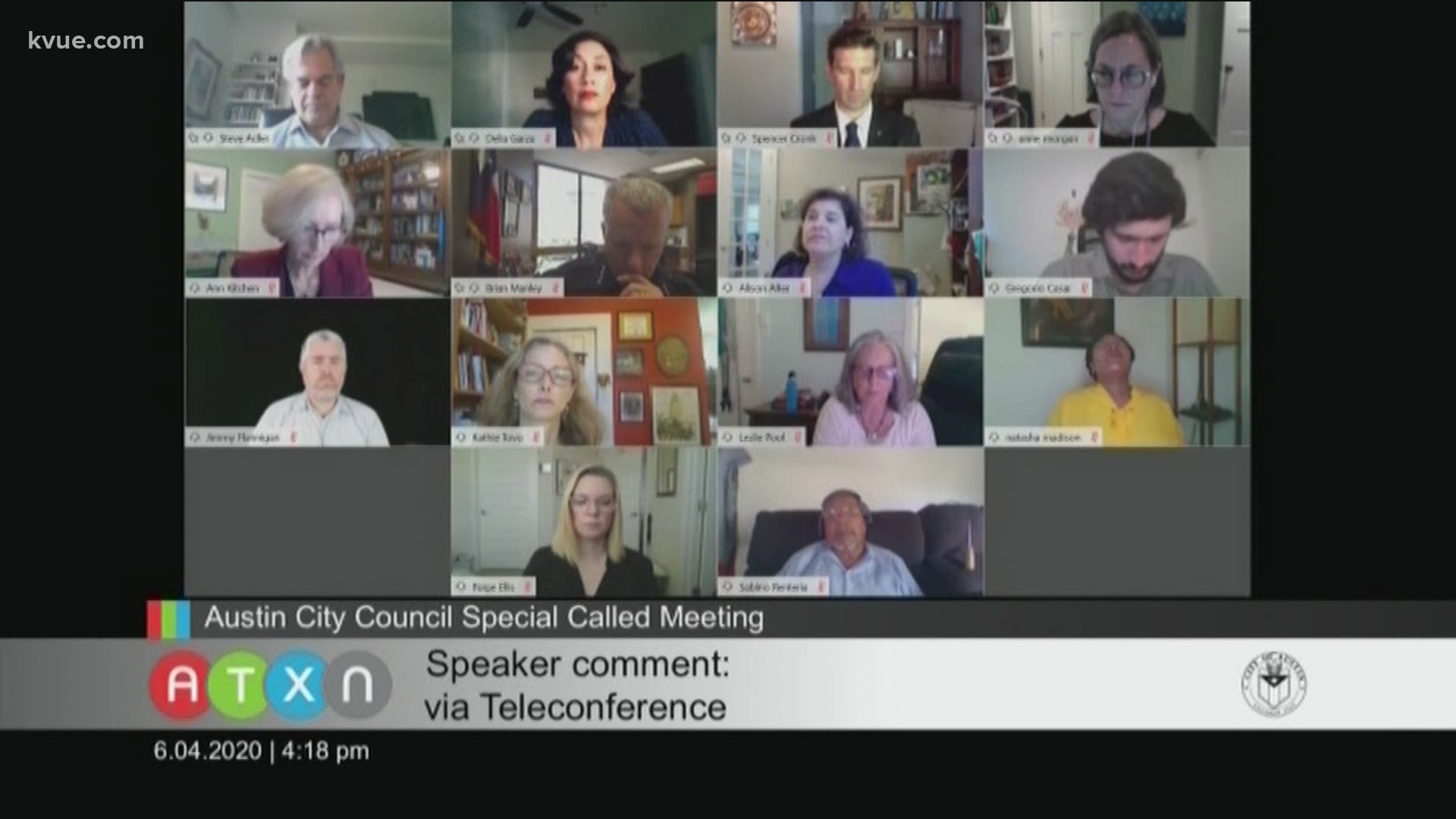 AUSTIN, Texas — At a special meeting Thursday with Austin City Council members and Austin's police chief, Austinites called for transparency and halting the use of "less-lethal" rounds against protesters.

The meeting was called after a weekend of protests unfolded in Downtown Austin following the police-involved deaths of George Floyd, Austin's Mike Ramos and others. Hundreds of people signed up to speak during the public session.

The meeting was meant to serve as a "briefing on protests in the city, including protocol and practices employed." Over the weekend, a man in his 20s, a teenage boy and a pregnant woman were shot by police with less-lethal rounds. The man in his 20s is in critical condition.

The young man who is currently in critical condition was identified in an op-ed article written by his brother as Justin Howell, a political science student at Texas State University. His brother, Joshua Howell, said in the article he "has a fractured skull. He has brain damage."

Mayor Steve Adler held a moment of silence for the families of George Floyd and Mike Ramos before taking calls from protesters and citizens.

One caller spoke about their sibling who was coming home from work and was shot by a beanbag round. The beanbag round had entered his skull and caused a contusion.

"We thought he was going to die," the caller said through tears. "He was still in his Jersey Mike's uniform when they shot him."

The caller said the surgeries his brother underwent took approximately seven hours and will leave scars on the side of his head for the rest of his life.

"We just want to know the truth. We just want transparency from the police to know what happened," the caller said.

The caller said his brother is in a lot of pain from his injuries.

"It's so hard, it's so hard for this family. I can't even imagine what he's going through," the caller said.

The caller said his brother is so kind and is the most responsible 16-year-old he knows.

In response to the caller, Austin Police Chief Brian Manley said that going forward, beanbag rounds will no longer be used in crowd situations.

RELATED: 'His name is Justin Howell. And he is my little brother.' | 20-year-old struck by less-lethal round in critical condition

Councilmember Greg Casar said this was not enough of a response from Austin police. He said that after watching the video, the caller's brother was not in a crowd when he was shot in the head with a beanbag round.

Another caller used her time to share a video of instances of violence from Austin police officers during the protests in the city.

The following caller spoke about how he was shot in the face with a less-lethal round and said if he wasn't wearing sunglasses at the time, he's certain he would be blind.

One caller said he was with a newly formed group called “Street Medics Austin.” He said several of the group’s medics were injured and some will require surgery. He said one of the medics was carrying an injured protester when she was shot in her hands.

Callers continued to share acts of violence they experienced during the protests from Austin police officers.

“It was like they were shooting fish in a barrel,” one caller said.

The same caller called for Chief Manley to release the HALO video of the events that occurred with Justin Howell.

Another caller said the first incidence of violence he saw at the protests was an Austin police officer who took an umbrella out of a woman’s hands and sprayed mace in her face when she asked why. The caller said he would rather see money be thrown in a dumpster than be used to fund APD because he’s not afraid of a dumpster killing him or his family.

The next caller said she has never felt so unsafe in Austin as she did during the protests. She said the only threat came from those who were armed – Austin police.

"I am asking you for the first time in 400 years to stand up, because black lives do matter," she said.

Many callers asked the council to fire Chief Manley and "defund" the Austin Police Department.

Prior to taking calls, councilmembers issued statements and comments.

Councilmember Leslie Pool used her time to speak for two residents from her district. One person said they were hoping to see leaders doing what they can to calm this chaotic issue. The other resident said the most important thing was to stop shooting beanbags into the crowd and to actually deal with the issues.

Pool emphasized the importance that citizens feel as though they are protected rather than being policed. She called for the demilitarization of Austin police.

Councilmember Sabino Renteria spoke of a time of racial inequity growing up in the 1960s. Renteria said this has been happening year after year. He called for the adoption of the eight policies former President Barack Obama has called for.

Mayor Pro Tem Delia Garza spoke about her disappointment in the Austin Police Department and expressed that her faith in police leadership has been shaken. Garza said police officers behave as they are trained to and how they are allowed to by leadership. Garza said a change is necessary, and she is willing to do everything she can to help that change take place.

"I truly believe there is a space for our community to demand police accountability and police reform," Garza said.

Councilmember Paige Ellis said the tactics referred to "less-lethal" have turned out to not be non-lethal, referring to those seriously injured by the less-lethal bean bag.

"I kneel with you, because black lives matter," Ellis said through tears.

Councilmember Kathie Tovo thanked everyone who has reached out to the council with ideas on how to improve the social inequities in Austin. Tovo demanded a full and transparent investigation into the death of Michael Ramos. Tovo offered her concerns for everyone injured in the protests in the city. She said she simultaneously supports police reform and the police officers in Austin.

Councilmember Alison Alter started off by thanking those who have reached out to share their perspectives with her office. Alter said she is approaching these issues as both an elected official and as a mother. She said there are many difficult conversations and decisions to come in the following months.

"It's clear as a city and a community that we have a lot of work to do," Alter said.

Councilmember Greg Casar said he has had the chance to speak with the family of Michael Ramos and the families of some of the family members of injured protesters. Casar said he was concerned with more than just police shootings but also with how police have handled the protests. Casar spoke about banning the chokehold tactics that caused George Floyd's death and banning the use of tear gas on protesters.

"Mike Ramos should be alive, too. That's why people are out protesting," Casar said.

Councilmember Ann Kitchen said she wants everyone to know that she is greatly disturbed and appalled at what happened during the protests in Austin. She said it is absolutely unacceptable that people are injured by police in this city. Kitchen called for a transparent review of APD and accountability. Kitchen said it is necessary that police officers and leadership are held accountable for their actions.

"We should be the best in this country, and we are far from it, as we can see," Kitchen said.

Mayor Steve Adler said it is clear that this is the moment to stand against institutional racism. He said the right to protest cannot be fraught with fear. Adler said the community must be seen as one that rises and falls together. He called for protesters to attempt to partake in smart social-distancing practices as much as possible. Adler said he supports the right for Austinites to protest for what they believe in and he hopes these protests bring about real change.

"Yes, protests are disruptive," Adler said. "They're meant to be."

Councilmember Natasha Harper-Madison said the words of the community are inspiring and heartfelt. Harper-Madison called on Chief Brian Manley to turn his camera on and look at the councilmembers as they spoke about police brutality.

Harper-Madison said she is concerned about provocateurs taking advantage of the protests. She said if people are out at demonstrations pushing an agenda not related to the Black Lives Matter movement, they should not be out there. Harper-Madison begged protesters to not follow those who are trying to provoke violence or other crimes.

"I'm tired of talking, and I'm tired of people feeling bad," she said. "We all should feel sad and mad and demand that we stop talking. The outcry for justice, it's been present, but we didn't answer it. We need action. And we need justice."

She ended her time by thanking every single person who came to speak at the meeting.

Mayor Adler Tweeted during a break issuing the following statement:

"It's unacceptable that so many were hurt, some severely, during the protests. I pray for the full recovery of those injured. The Office of Police Oversight is reviewing & submitting complaints for investigation. I expect a full review of police response to the protests. As a community, we need better answers and more transparent police policies. #ATXCouncil is listening to our community today. We will continue this conversation tomorrow at 9am where we will both look in to APD's crowd control response and discuss the demands of the movement. By interrupting business as usual, protests also disrupt patterns of thought and policy in important ways. We have to rise to this occasion. I look forward to #ATXCouncil ’s discussion both tomorrow and beyond. Our work towards real change starts now."

"Testifiers today are calling for immediate action. I agree. City Council should immediately vote to:

-Ban shooting at people who are fleeing (#MikeRamos)

After councilmembers spoke at the meeting, City Manager Spencer Cronk and Chief Manley were invited to speak.

Cronk said he personally struggles with the complexity of the moment. He said he wants everyone in Austin to know he is committed to the hard work and tough conversations to rebuild the lost trust in the Austin Police Department.

Chief Manley said he takes this as a very important time to reflect on what has brought the city to this point. He said he struggles to watch the videos of police brutality. Manley said APD is committed to serving the community and to serve them correctly. He said he looks forward to finding ways to improve the department through the public's comments.

The Austin protests were part of nationwide unrest that has erupted after a video showing Floyd's arrest and death spread across the country. Ramos died after he was shot by an officer in late April, and the case will now be presented before a grand jury, the Travis County district attorney announced.

The meeting is streaming here.

A GoFundMe has been started to raise money for Justin Howell. You can view that fundraiser here. 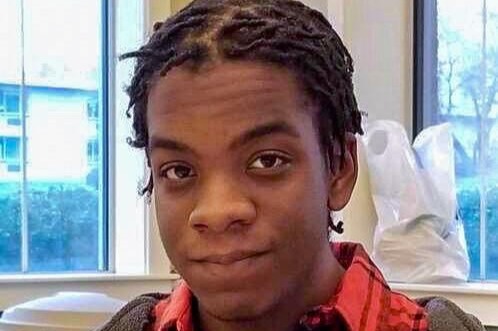 #HisNameIsJustinHowell organized by Gregory Josephe Graye
My name is Gregory Arellano and I'm starting this GoFundMe to go to the family of Justin Howell, a fellow Texas State student who was critically injured by Austin Police during protests Sunday, May 31st Justin was hit by a rubber bullet and has a fractured skull as well as brain damage that, according to his brother Joshua, will lead to an extensive recovery effort.