Demonstrators continued to descend on Downtown Austin on Tuesday, June 2, after four straight days of protests. 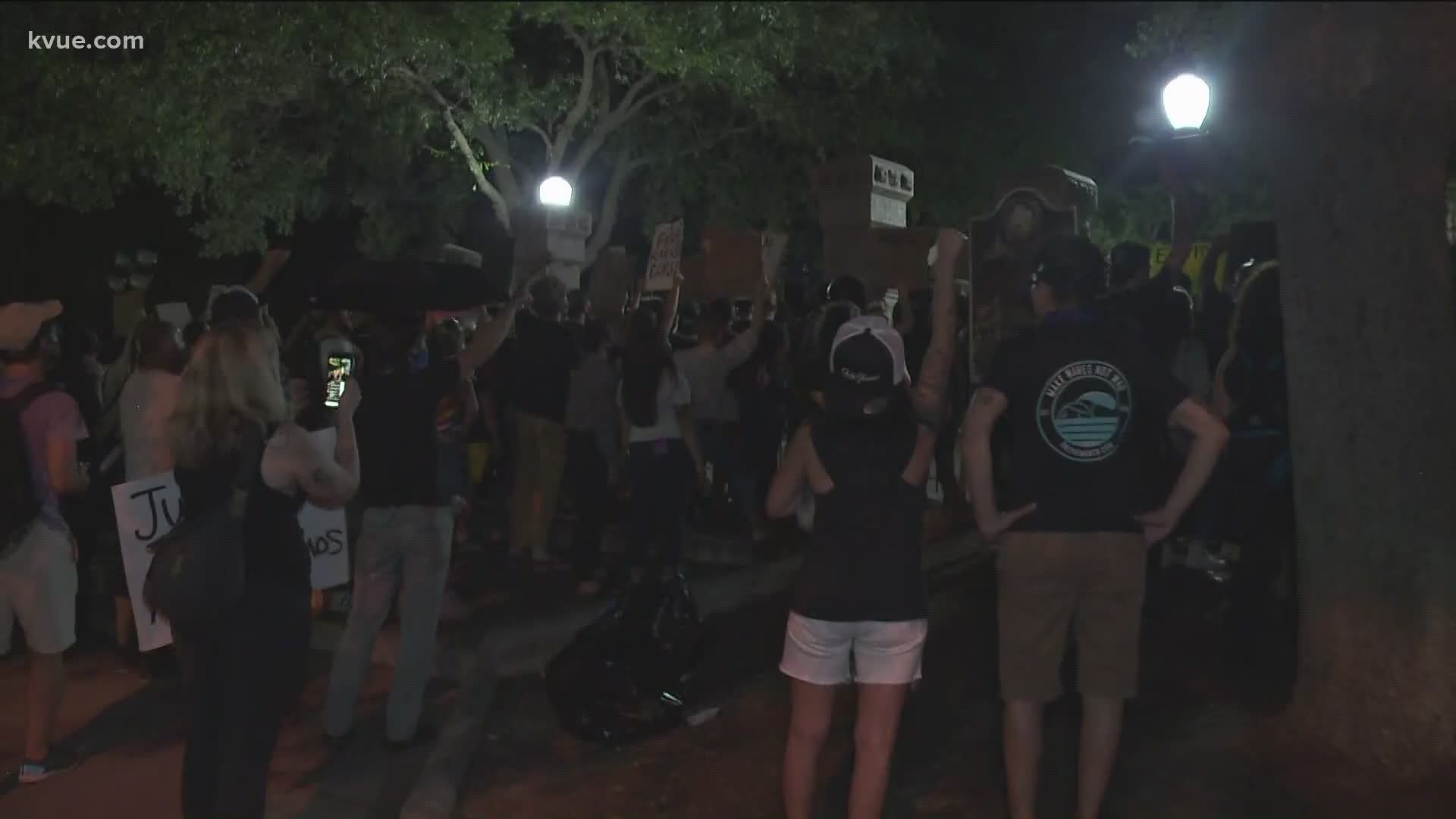 AUSTIN, Texas — Editor's note: This story is no longer being actively updated.

Tuesday, June 2, marked the fifth straight day protesters descended on Downtown Austin to rally against police brutality and stand up against racial injustice.

The protests have been the public's response to the deaths of George Floyd in Minneapolis and Michael Ramos in Austin. Floyd died in police custody last week, and Ramos died after an Austin police officer fired his rifle at him in late April.

11:20 p.m. – Hank Cavagnaro and Luis de Leon are live outside the Capitol, with a look at the slightly diminished crowd:

Hank Cavagnaro KVUE and Luis de Leon are here with another look at the crowd outside of the State Capitol.

10:45 p.m. – Pattrik Perez says the crowd has dissipated some at APD headquarters after the driver incident, but Luis de Leon says the crowd is still active at the Capitol.

10:30 p.m. – Demonstrators outside the Capitol continue to discuss the changes they say need to be made. Meanwhile, one man Luis de Leon spoke to donated 25 pizzas to make sure the protesters have food.

This man, @LuisdeLeon15 is taking to has just dontated 25 pizzas to make sure protestors have food here at the Capitol. He said “some people don’t have the means to get food, and I wanted to show my support” @KVUE pic.twitter.com/COXMp4REcr

Caution: profanity “I know you’re angry, let’s channel that into some real S***” there is a group continuing to talk about the changes they say need to be made. @KVUE pic.twitter.com/PNsFwG31FD

9:40 p.m. – Pattrik spoke with an officer and a witness who said a driver didn't abide by the barricades near APD headquarters. They drove their truck over a median and were driving erratically. Pattrik confirmed that APD has impounded the truck and may have detained someone. APD had asked people to leave the area for their safety. As far as we know right now, no one was injured.

9:30 p.m. – Pattrik Perez is live outside the APD headquarter, where protesters just ran away from the building:

Pattrik Perez KVUE is live at APD headquarters where protesters just ran away from the building. WARNING: This video may contain offensive language.

9 p.m. – Luis de Leon is live outside the Capitol:

Luis de Leon has a live look outside of the Texas State Capitol in Downtown Austin. WARNING: This video may contain offensive language.

8:50 p.m. – KVUE's Luis de Leon, Pattrik Perez and Hank Cavagnaro are all in the field at the Texas Capitol, where protesters are gathered. Many are chanting.

The crowd outside of the capitol at 8:41. As of right now a calm atmosphere. @KVUE pic.twitter.com/0FaBTJ9bw2

7:40 p.m. – Protesters had split into two major groups, one at the Capitol and one at APD headquarters. At APD HQ, a six-year-old chatted with an officer.

On the other side of the building, this 6-year-old just chatted with an @Austin_Police officer. Before he and his family left, he saluted them. @KVUE pic.twitter.com/IYBEhswozo

7:15 p.m. – KVUE's Molly Oak captured a sign language conversation between a demonstrator and a police officer.

4:39 p.m. – Protesters are on the move, with a few still at APD headquarters, KVUE's Molly Oak reports.

Protesters are on the move, with a few still at APD headquarters. @KVUE pic.twitter.com/4lzyqg4rgM

4:10 p.m. – The crowd is growing outside of Austin Police headquarters. Officers are speaking with protesters.

Crowd is growing outside of @Austin_Police headquarters. Officers are speaking with protesters. @KVUE pic.twitter.com/QG2vxSiRxt

3:19 p.m. – A group of protesters is outside of Austin Police headquarters.

Monday night's protests remained peaceful, with police joining the crowd for conversations with protesters. Some officers were also seen embracing and shaking the hands of protesters. KVUE's Molly Oak captured the moments APD officers marched arm in arm with demonstrators. You can watch our live coverage of Monday's protests here.

Austin Police Chief Brian Manley also held a virtual press conference Monday regarding police officers shooting protesters over the weekend with non-lethal rounds. In his conference, Manley said police were currently investigating three instances, one where a man suffered critical injuries, one where a teenage boy was seriously injured and one where a pregnant woman was hurt.

Protesters began gathering at the Capitol Sunday around noon despite the Austin Justice Coalition canceling its march. KVUE's Mari Salazar reported that an altercation near City Hall led to APD firing rounds of rubber bullets. Some pepper spray was also deployed, and Interstate 35 was shut down twice on Sunday. The first occurrence led to APD clearing I-35 by using smoke devices and CS gas. A Target store in Capital Plaza was also looted Sunday, according to APD. Aside from these few instances, the sense of the protests throughout Austin for the day remained generally peaceful. You can watch our live coverage of Sunday's protests here.