'Don’t Be Bullied': Anti-vaccination mandate billboards pop up in SA

The billboard campaign has appeared just as Bexar County prepares to initiate a similar effort to encourage vaccines. 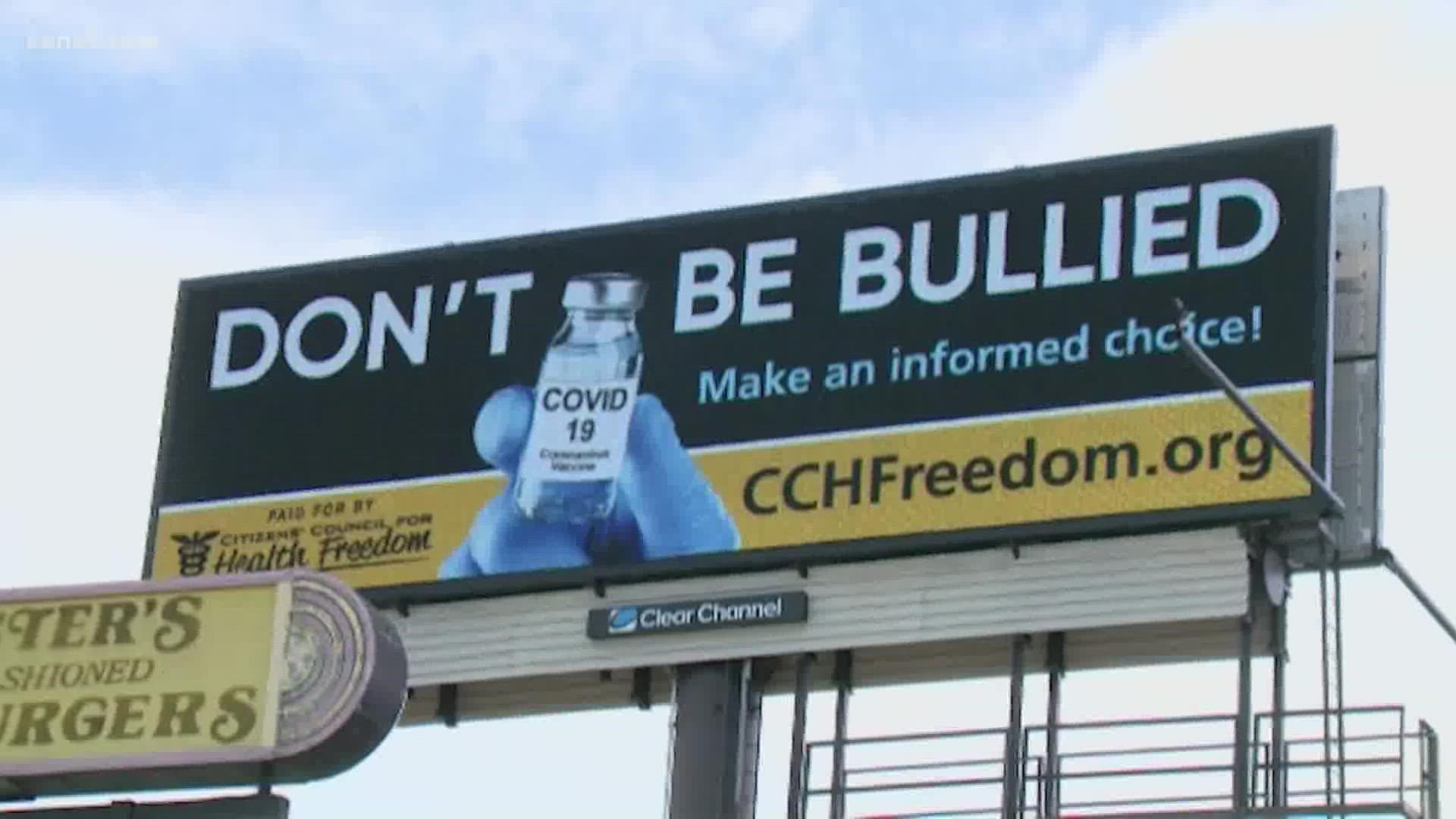 SAN ANTONIO — A new billboard campaign against vaccination mandates is running nationwide, and San Antonio is one of the targeted cities.

The group behind it is from Minnesota. They say their goal is to raise awareness and build resistance to the new vaccination rules.

The digital billboard campaign is simple and straightforward: “Don’t Be Bullied. Make an Informed Choice.” Citizens’ Council for Health Freedom (CCHF), the Minnesota organization behind the message, says their intent is to support people who are being bullied for refusing to take the shot.

Twila Brase, the president and co-founder of CCHF, said on the group's website that the mandates are a “power grab in the name of public health.” She said the campaign is an attempt to reset what is happening between the U.S. government and its citizens.

CCHF says there are two billboards in San Antonio and a total of eight statewide, including in Waco, Houston, Austin, and Dallas. As for other states, the organization has them up in Minnesota, Idaho and Wisconsin.

KENS 5 brought the campaign to the attention of local leaders at Thursday evening's city and county coronavirus briefing. Mayor Ron Nirenberg said he is not aware of anyone who feels like they are being bullied by pro-vaccination efforts.

"I haven’t met anybody who said that. If they feel that way, I’d love to visit about that because what you’re hearing in terms about people encouraging others to get vaccinated is to protect the health of person and the people around them," he said. "(It) certainly raises questions when an organization out of Minnesota has interest in buying San Antonio billboards. Clearly, they have a political agenda.”

Bexar County Precinct 2 Commissioner Justin Rodriguez pointed to the coronavirus data and said the bullies are the people behind the billboards. He said 85% to 90% of those who have been hospitalized in the county are unvaccinated.

"We are, I think, singularly on a mission to defeat this pandemic, to beat COVID. We know the way to do that is to get vaccinated," Rodriguez said. “Our message to the bullies is sometimes you got to punch a bully in the face, but at this point, the way to do that by punching back is getting the vaccination.”

Before this campaign launched, Bexar County kicked off its own pro-vaccine billboards. Commissioners dedicated $300,000 dollars in federal aid to combat misinformation.

They plan to put them up in rural areas of the county with low vaccination rates.