Homeowners continue to estimate the staggering damage from Tuesday's big hail storm including the cost of ruined solar panels. But a solar farm on the northeast side may have the most panels cracked and crushed. 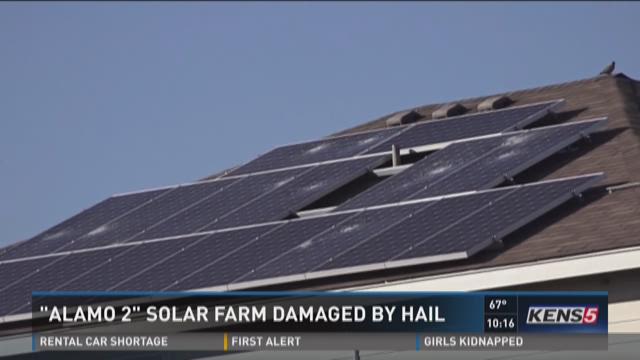 Homeowners continue to estimate the staggering damage from Tuesday's big hail storm including the cost of ruined solar panels. But a solar farm on the northeast side may have the most panels cracked and crushed.

After the storm, a bird's-eye view shows damage to what looks like close to a quarter of the Alamo 2 solar farm panels located off Binz-Engleman Road. Some of the panels seem to have been hit by at least six to nine large hailstones. Others were left completely untouched.

There are close to 18,000 solar panels at Alamo 2 that can power about 800 homes. OCI, who runs the solar farm, said that because of the damage, the power the farm puts out has been diminished but they are still trying to determine to what extent.

"I was at home and watching TV and all of a sudden I hear all this noise outside and I had no idea what was happening," homeowner Mitch Childress said.

Childress lives about half a mile down the street from the solar farm. He has 40 solar panels on his roof. Of those panels, 14 got smacked on Tuesday night.

"We were hoping there wasn't going to be too much damage but it turns out there was a pretty good amount," he said.

Childress added that the panels from Freedom Solar were turned on for the first time two days before the storm, but now he's had to shut them all off.

"I know that Freedom Solar has a lot of customers, and I'm just waiting my turn for them to come, and the maintenance people to come and take a look at it," he said.

There aren't just solar panels at Alamo 2, though. There are sheep who take care of the grass. Thankfully, they seem to have weathered the storm just fine.