Peaceful protesters marched from Travis Park to Public Safety Headquarters, then gathered in Alamo Plaza. But after nightfall, rioters and vandals emerged. 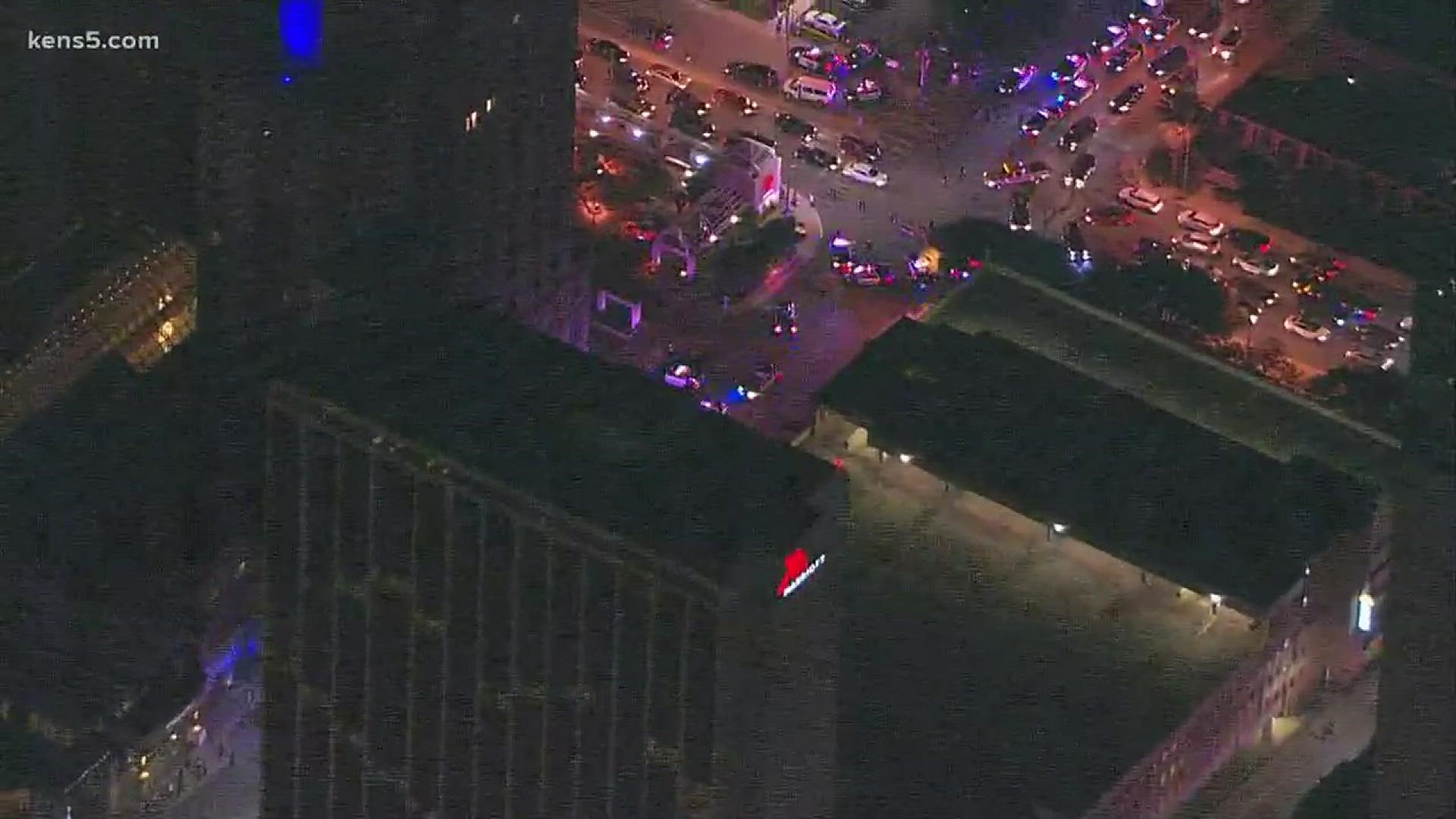 Protesters have gathered in downtown San Antonio to protest the death of George Floyd.

SAN ANTONIO — Here are the latest developments after thousands of people protested in downtown San Antonio on Saturday night following the death of George Floyd in Minneapolis:

The San Antonio Police Department is looking for suspects accused of attempting to burn down the parole office in the 2900 block of NE Loop 410. Authorities said they used an accelerant to light the lobby on fire. Damages estimate around $20,000.

SAPD Chief McManus said that after peaceful protests against police brutality, agitators became more destructive downtown near the Alamo. He said three officers were hurt and one person had a seizure outside of the Public Safety Headquarters.

McManus said he suspects that most of the people causing damage are from out of town.

Mayor Nirenberg called the vandalism downtown a disservice to the people who protested peacefully today. 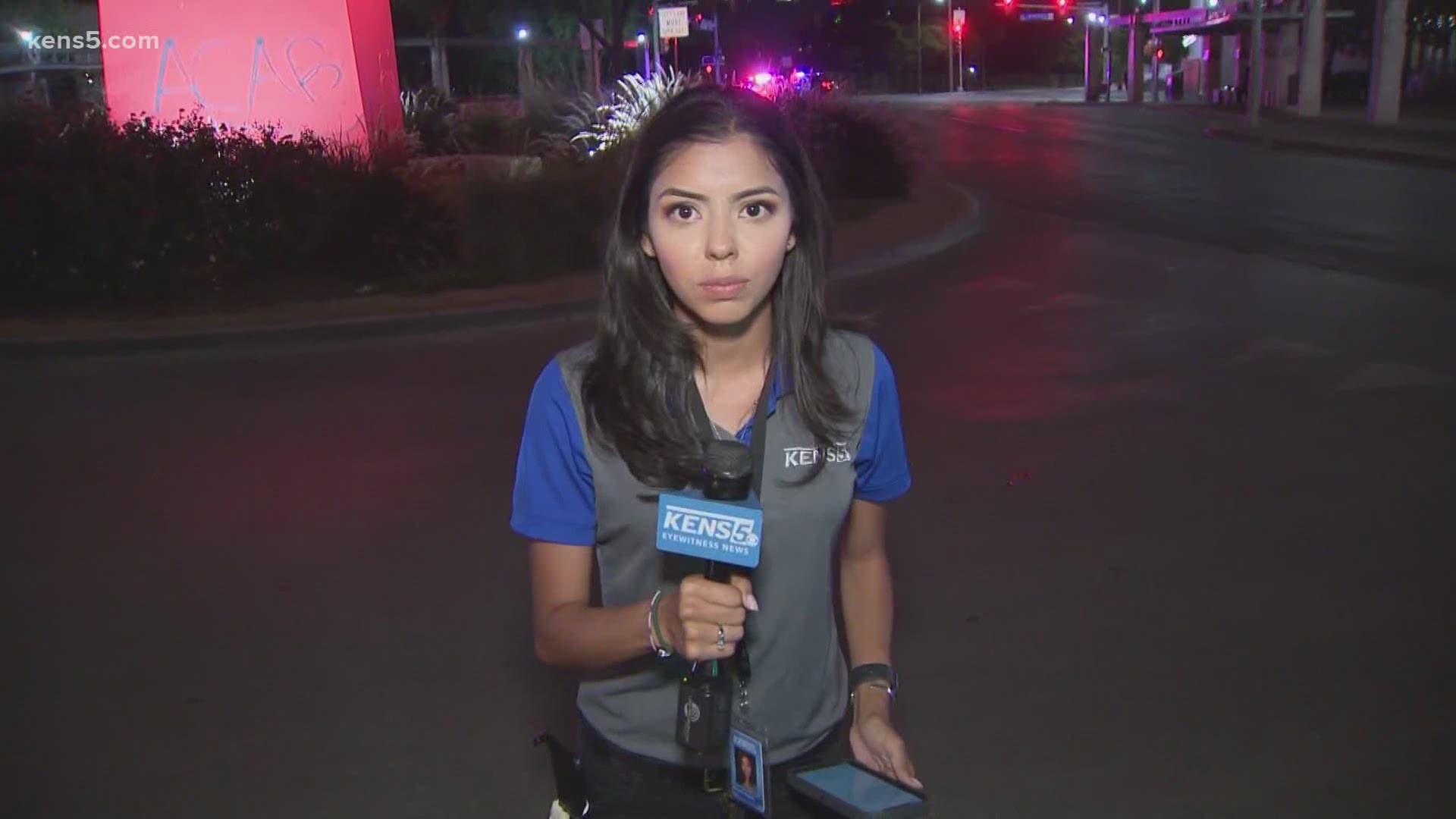 Mayor Nirenberg has released a statement on the curfew for downtown San Antonio.

"The voices of the peaceful demonstration that took place earlier today need to be heard," Nirenberg said, careful to differentiate the march for George Floyd from the damage after dark. "This evening's vandalism of infrastructure, buildings and public art will not be tolerated.

Officials are expected to hold a press conference at midnight downtown. There will be another curfew on Sunday night starting at 10 p.m.

He said that San Antonio is better than what he's seen tonight, and authorities will be restoring order to the area.

Posted by Bexar County Sheriff's Office on Saturday, May 30, 2020

Businesses downtown have been damaged and vandalized after dark just a block west of the Alamo.

Buildings on East Houston St. have had windows blown out, and authorities are urging people to avoid the area.

Rioters were seen throwing rocks and fire extinguishers at windows in downtown San Antonio. Trash cans also were being overturned.

After a day of mostly peaceful protests, police sources say a few people are attempting to break into the shops at Rivercenter Mall.

KENS 5 has made the decision to pull our reporters back from the protests on the ground as nightfall approaches. Crowds of protesters have suddenly come running down the street multiple times, and our top priority is keeping our crews safe. We will continue to cover the protests from the air.

Governor Greg Abbott has activated the Texas National Guard in response to protest violence throughout the state. The governor released the following statement:

"Texans have every right to exercise their first amendment rights, but violence and looting will not be tolerated."

It is not immediately clear where the National Guard will be deployed.

There are a large number of police officers in riot gear at Alamo Plaza.

Many protesters are marching back to Travis Park.

A crowd of several thousand protesters have gathered outside of the San Antonio Public Safety Headquarters.

A large crowd of peaceful protesters is marching from Travis Park toward the San Antonio Public Safety Headquarters. Police are diverting traffic.

A large crowd of protesters have gathered in downtown San Antonio at Travis Parkto protest against police brutality. They are chanting "Black Lives Matter," "No justice, no peace," and the names of George Floyd Charles Roundtree, and others.

Texas Freedom Forces organize armed detail of Alamo Cenotaph after vandalism. SAPD Chief William McManus says a large police presence will be in the area to maintain the peace.

San Antonio Police Chief William McManus said there will be a large police presence downtown as protesters march against police brutality while armed citizens organize at the Alamo cenotaph.

"We have got a massive force that will be out there in the downtown area," said Chief McManus. "We hope that that show of force deters anybody from doing anything that will be destructive and counter-intuitive to what this protest is all about."

Police Chief William McManus gives a briefing ahead of anticipated protests in downtown San Antonio over the death of George Floyd.

Protests and unrest have spread across the country after video showed a Minneapolis police officer kneel on George Floyd's neck. The officer has been charged with third degree murder, but the other three have not yet been charged. McManus used to be the chief of that department.

"We don't teach that kind of tactic," McManus said. "It's an absolute step back for all of law enforcement when this happens. We work so hard to shore up our relationship with the community, but when this happens, it's ten steps backwards, and we've got to start all over again."

McManus said he is meeting with the organizers of the protest, and he has requested 75 troopers from the Department of Public Safety. He said that his officers will largely stay out of the way unless they are needed.

"My standing policy is we are out of sight of the protesters unless we get a call that something is going wrong," he said. "We don't want to hover, we don't want to give the impression that we're just waiting for them to do something wrong, they have every right to be there. The only time that we'll show our presence is if there's a breach of the peace, or if there's a need to separate counter protesters, or to provide traffic safety."

According to McManus, public safety is the main concern.

"We want them to exercise their first amendment rights, and in some cases out there their second amendment rights," he said. "We have staffed up based on what we've seen happen around the country. We hope we don't have those issues here, but if we do we'll be ready for it."

As protests and riots continue throughout the country in response to the death of George Floyd, one San Antonio group was planning a protest of its own for later Saturday afternoon.

RELATED: More National Guard members to be called up after 4th night of Minneapolis unrest

RELATED: 'I can't breathe': Protests in honor of George Floyd, Breonna Taylor take place in downtown Dallas and Fort Worth

This past week, a video went viral that showed Floyd in police custody, gasping for air as former Minneapolis Police officer Derek Chauvin knelt on his neck. Floyd died while Chauvin was still on top of him.

According to a Facebook Event posting, a "Justice for George Floyd" event will be held at 5 p.m. Saturday at Travis Park in downtown San Antonio.

The description for the event reads: "Emergency call to action in solidarity with George Floyd’s family and the freedom fighters in Minnesota. If anyone was able to make it out or invite others! Please, please, please, wear a mask and adhere to social distancing."

The event, which is open to the public, is being hosted by the Autonomous Brown Berets De San Anto.

Travis Park was home to a Confederate statue until 2017, when the San Antonio City Council voted to remove it from public display there.

On Friday, San Antonians awoke to images of vandalism of the Alamo Cenotaph. The historical marker was tagged with "white supremacy," "profit over people" and "The Alamo." Each line had a downward-facing arrow next to it.

Noah Escamilla, 25, has been arrested in connection to the vandalism.

Armed members of This Is Texas Freedom Force said they would be guarding the Cenotaph from further defacing.

More protests are expected to be held in other major Texas cities throughout the weekend.

RELATED: 'It's not okay' | Sheriff Salazar, Mayor Nirenberg speak out against killing of George Floyd