Kids Who Make SA Great: The cancer-fighting kid behind #BryceStrong

Bryce Wisdom considers himself a normal kid with a demanding medical battle. He hasn’t quite wrapped his head around being the focal point of a movement. 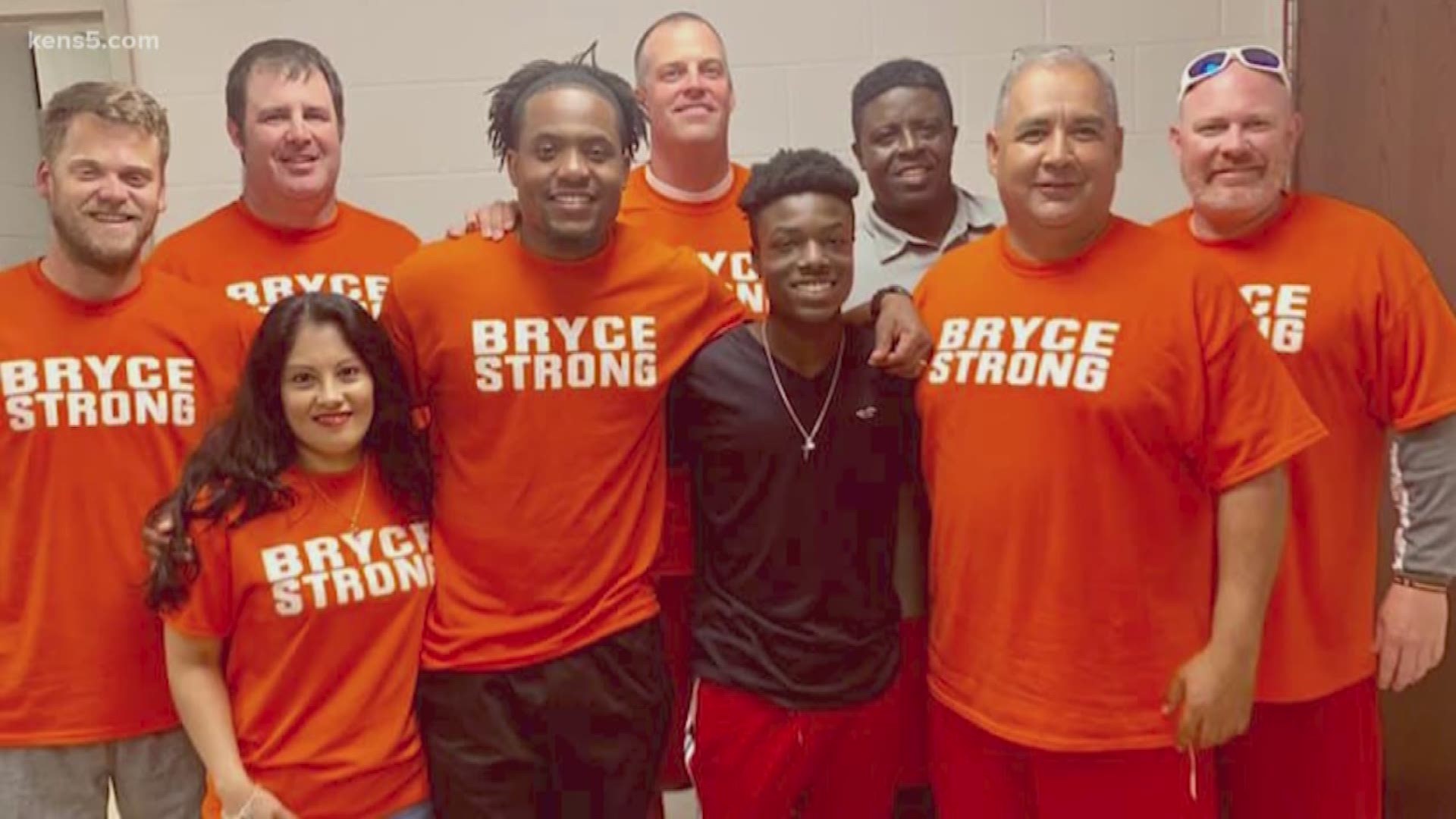 SAN ANTONIO — The day before Judson High School’s matchup in a Thursday night game, head football coach Rodney Williams and Defensive coordinator Thomas Sitton were visiting a player who is no longer an active member on their roster.

Their player — their brother —  is Bryce Wisdom. The 16-year-old’s battle against cancer has attracted an army of supporters.

“His toughness. His heart. His love for his teammates,” Sitton said. “The fight he’s bringing to this thing right now.”

That thing is cancer. It’s the second time in a year the teen finds himself in the fight for his life.

Richard and Diana Wisdom recall in mid-March when their son complained of pain in his side. But they thought their football-loving son had a sports injury until Diana got a disturbing text.

“And he sent me a text that said, 'mom I have blood in my urine,'” Diana remembered.

A second bloody incident in the restroom was confirmation that something was wrong. The parents thought it was an infection until the doctor walked out with words no one wanted to hear.

“She says I don’t have good news,” Diana recalled. “Bryce has a massive tumor in his right kidney. It’s a Wilms tumor.”

A Wilms tumor is a rare cancer of the kidney. It’s a highly treatable form of cancer where the survivors live productive lives. Diana didn’t realize the tumor was cancerous initially. But it didn’t take her long to find out her son had it.

“I had to leave the room. I went outside and just lost it,” she said. “He has cancer! It’s cancer!”

The mother of four sons said she cried blindly into her cellphone to anyone whose voice would answer. Football loving Bryce was able to hold it together until he got home. Then, he fell apart.

“When you think cancer, you think everybody that died,” he said. “And how bad they said it was. And that was scaring me at first.”

Bryce is the Wisdom’s third son. His brothers play football including UTSA safety Rashad Wisdom. So, one of the older brothers rallied the troops. Everyone got in line with the coaching and moved forward.

Surgery to remove his kidney and 19 rounds of chemotherapy was what Bryce had to undergo. He lost weight. He lost his active spot on the Judson football team. He even lost his hair.

He did not lose his spirit to win. Bryce’s mother used social media to enlist prayer warriors to help push faith across the finish line. #BryceStrong the hashtag and the mantra were born.

Richard said his son is the quiet one of the boys. Bryce’s strength has made him proud.

Bryce rang the bell to end his treatment. In June, all indications showed he was in remission. By August, the cancer came back. This time, the insidious disease was near his liver.

Their son’s hope of, at least, standing on the sideline with his team during the season ended. So, did his chances of life at Judson High.

Before he went into his next aggressive regimen his school sent the junior off #BryceStrong. Students linked the hallways chanting “Bryce Strong” as he carried a flag with the same words. Social media video from a local sports anchor showed the hallways filled with students, the marching band and the support.

“To me, I just feel like I’m a normal person going through a fight,” Bryce said.

“I’m marching in my living room for you,” she posted.

His family started selling T-shirts with “Bryce Strong” on it during his first cancer therapy. But the mantra started to spread.

Judson football rivals from New Braunfels and Smithson Valley showed their support for the quiet kid with the smile. Bryce even got a story in People magazine.

During this treatment doctors took a portion of his liver. He also faces 25 rounds of chemo. New to his cancer management is radiation which makes the teen a little nervous.

But he keeps his focus on family, friends and his faith.

“We’re here to fight until round 30. It really doesn’t matter,” Richard said. “We’re going to fight and fight until we win.”

As Bryce continues the fight he’s starting to see why “Bryce Strong” is so important.

“I’m starting to realize that I am because I’ve gone through a lot that most people can’t do,” he said.