Cesar Gonzalez is accused of smoking marijuana and drinking alcohol before speeding down Poplar, hitting a van with a family of four inside and fleeing the scene. 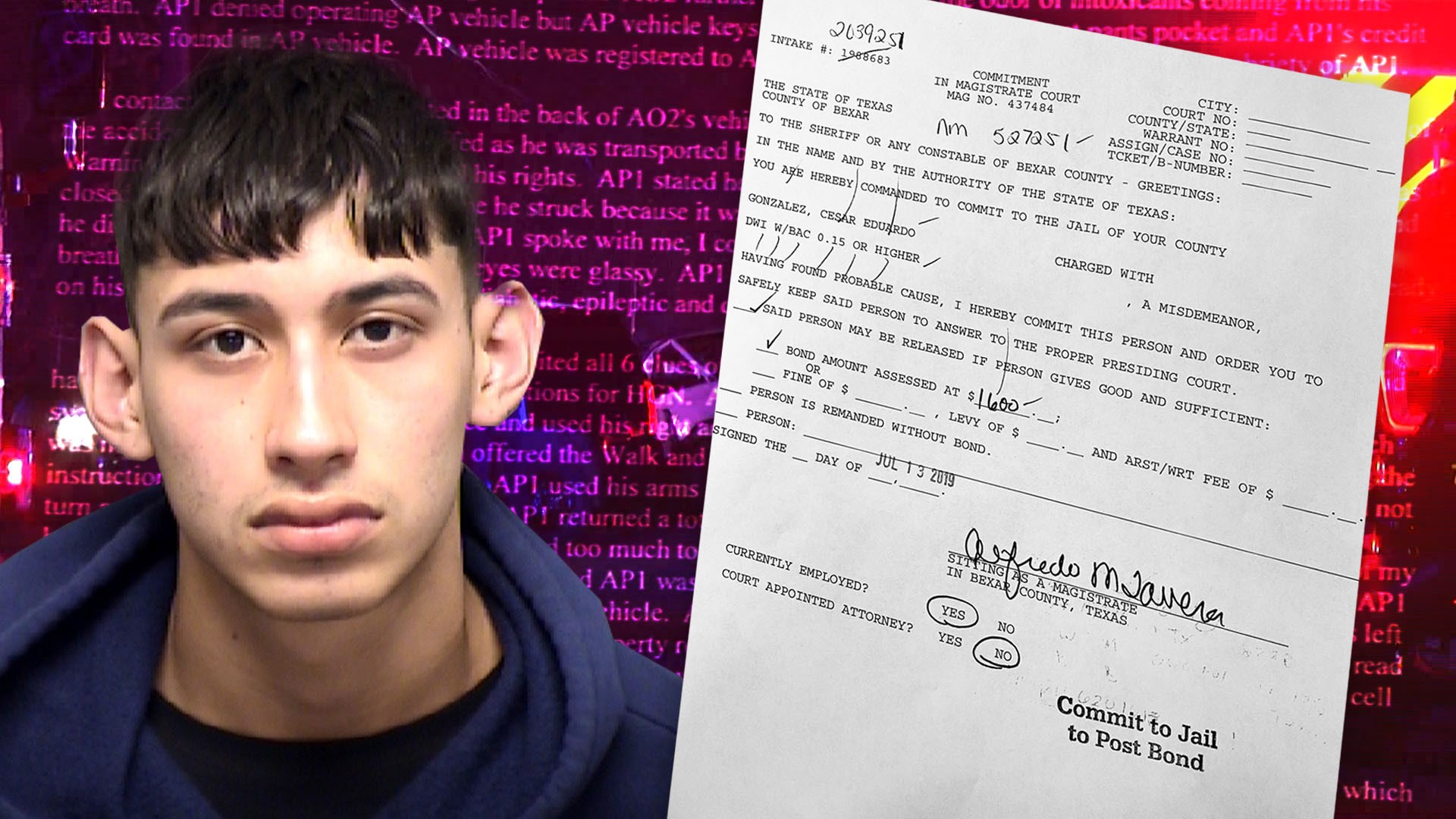 Cesar Eduardo Gonzalez has been charged with two cases of manslaughter and two cases of aggravated assault with a deadly weapon, according to Bexar County officials.

A man suspected of killing a father and his teenage step-daughter just minutes into the new year was out on bond on a charge of driving while intoxicated, records show.

The teen victim in the crash has been identified 14-year-old Kristina Aileen Spohn.

Cesar Gonzalez, 18, is accused of smoking marijuana and drinking alcohol before getting behind the wheel of his mother's truck and speeding down Poplar Street, hitting a van carrying a family of four.

Police said the family was pulling out of a driveway on Poplar and 24th streets, leaving a New Year's Eve party when Gonzalez hit their van. Authorities said the van burst into flames on impact.

An arrest affidavit states Jesus Aguilar Jr.'s burned body was found in the driver's seat of the car and 14-year-old Kristina Spohn was ejected from the van and died. Two others in the van were taken to the hospital with burns.

Witnesses told police Gonzalez and his friends ditched the wrecked truck after the deadly crash. He was arrested Thursday on charges of failure to stop and render aid resulting in death.

Records obtained Friday by Eyewitness Wants to Know show Gonzalez was arrested on a charge of driving while intoxicated with a breath alcohol content exceeding .15 in July – less than six months prior to the deadly crash – and wasn't subject to alcohol or drug monitoring when he was released from jail.

A police report for the July 13, 2019, incident states that Gonzalez was behind the wheel of his uncle's Chevy Cobalt when he struck a pipe used in a construction project. The report states that the car was driven to the intersection of Northwest 26th Street and West Commerce where it was no longer able to move, and that Gonzalez fled the scene.

Gonzalez was found a block away and submitted to two breath alcohol tests which were both above the legal limit, records show. Police also found nine grams of marijuana in the vehicle, according to the report.

Records show Gonzalez was charged with DWI and possession of marijuana. He was released after paying the combined $2,100 bail set by magistrate judge Alfredo Tavera.

The possession of marijuana case was dismissed for insufficient evidence.

While Tavera was able to set conditions of release including an in-car breathalyzer system, random drug tests or an alcohol location monitoring system, KENS 5 found no record of conditions in the case file. KENS 5 reached out to Tavera's law offices regarding the case Friday and did not hear back.

Attorney Robert Valdez is representing Gonzalez in the July case. He said for first-time DWI cases, it's normal for a magistrate judge to set a bail without any conditions upon release "unless the facts warrant differently."

“Sometimes when the breath alcohol is .15 or higher the judges can impose an ignition interlock or certain conditions of driving to prevent a person from driving while using alcohol," Valdez said.

Valdez said it's "very possible that it was an oversight on the judge that magistrated him." But he added that "sometimes they don't have all the facts when a person is brought in to the magistrates office.

"They go by the police report and maybe the judge at the time didn't have the results of the breath tests at the time that he set the bond, but the bond doesn't appear—it appears to be like a normal bond," he said. "Other than the conditions, because it was presented to the magistrate that it was a DWI first and usually they don't require any conditions unless the facts warrant it."

Valdez said he has not been retained by Gonzalez in the two recent cases, but said they planned on taking the July case to trial.

Before the July arrest, online records show Gonzalez had been arrested in January 2018 on a charge of driving while intoxicated. The charge was later dismissed for insufficient evidence.

A judge on Friday revoked Gonzalez's bond on the July case. Gonzalez remains behind bars at the Bexar County Jail without bond; he's due in court on Monday for a bond hearing in the July case.

Records show the district attorney's office is asking that Gonzalez's bond be increased to $50,000 and that he undergo drug and alcohol testing, install "SCRAM Continuous Alcohol Monitoring," be subject to "intensive supervision," and submit to electronic monitoring.

The family has set up a GoFundMe so community members can contribute financial resources during this time; it can be found here.

A neighbor's surveillance camera caught the dramatic moments immediately before and after the crash, including Gonzalez driving down the street before an off-screen collision. Not long after, multiple neighbors emerge from their homes. 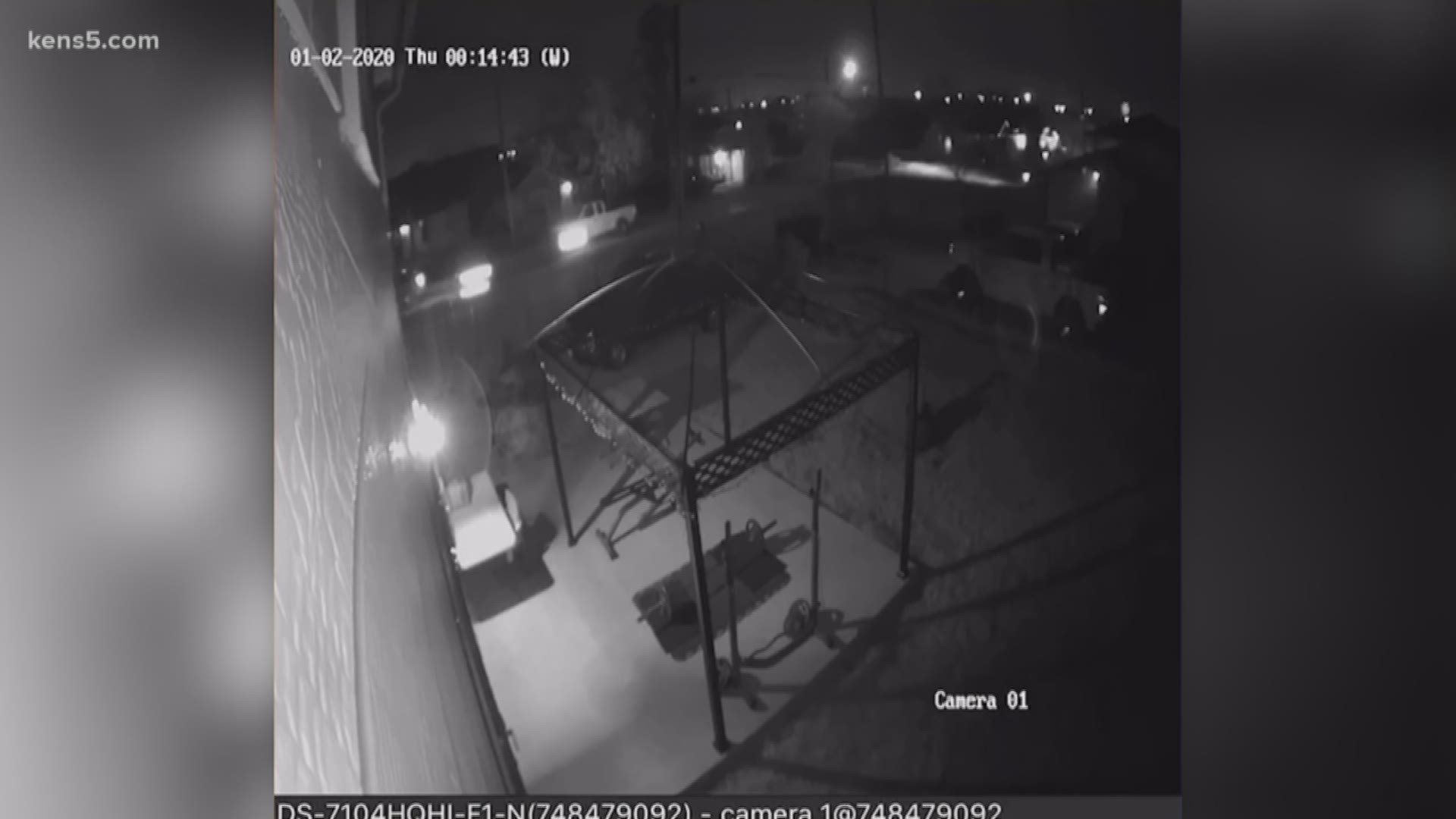 RELATED: 'We always have bad accidents': After fatal hit and run, neighbor says too many people speed through Poplar Street

RELATED: Man, 14-year-old girl killed in hit and run accident on the west side