Detective Emanuel Keith was fired in June and went before a hearing examiner Thursday to ask for his job back. 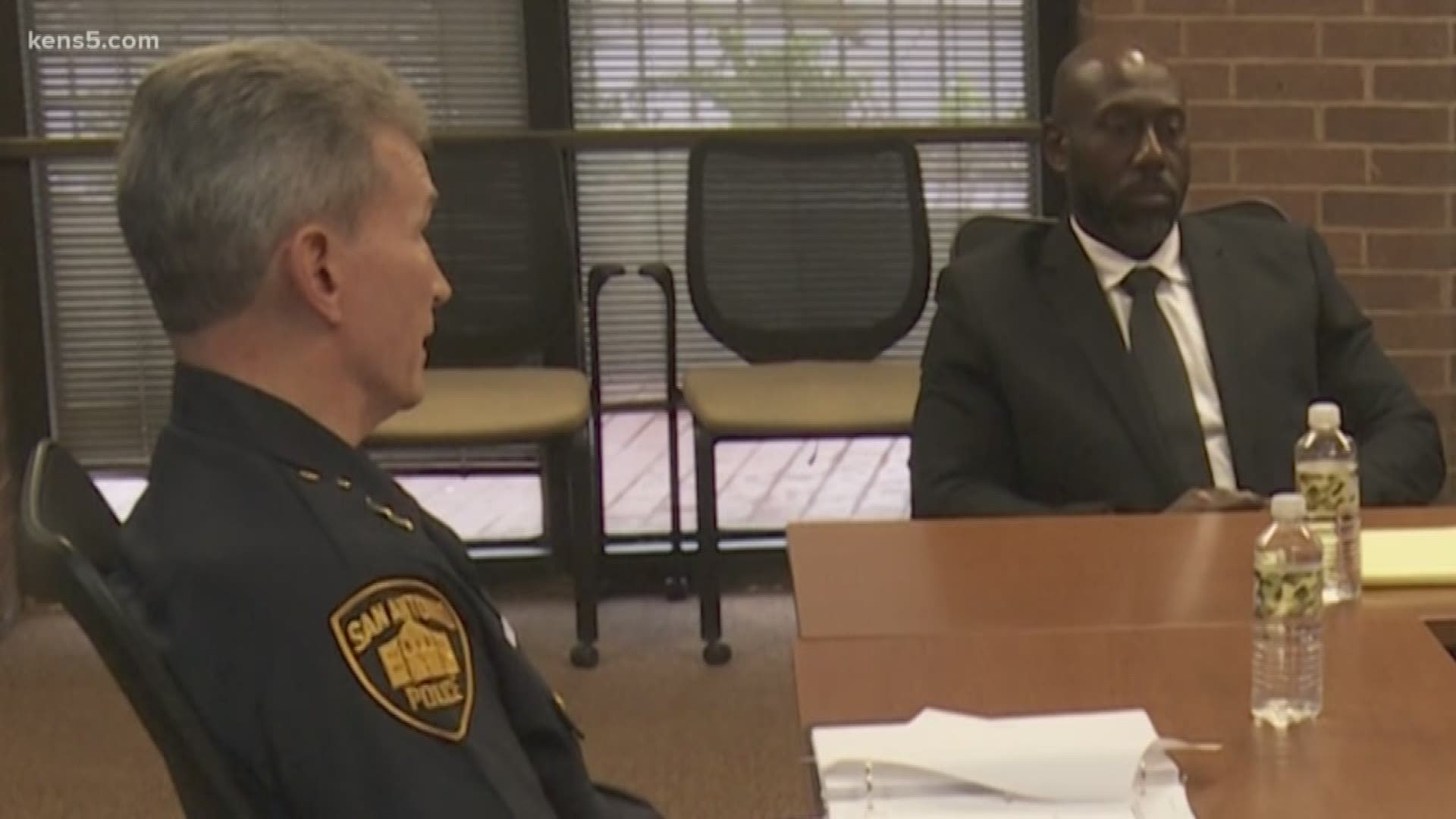 SAN ANTONIO — A former San Antonio Police Department detective who was fired after allegedly sending threatening text messages to a woman with whom he is alleged to have had a years long affair went before a hearing examiner Thursday to ask to be reinstated to the force.

Detective Emanuel Keith was fired in June after he threatened to kill his ex-girlfriend in a string of texts and voicemails in May 2018, investigators said. Keith appealed his termination and attorneys representing the department and Keith went before an arbitrator Thursday to spar over Keith’s firing.

Karl Brehm, an attorney for Keith, attempted to stop KENS 5’s Eyewitness Wants to Know team from recording the hearing. While cameras are allowed in arbitration hearings under the Texas Open Meetings Act, Brehm said he was concerned KENS 5 would reveal Keith’s address and phone number or get video of Keith at the hearing, although the latter is allowed.

The hearing examiner denied Brehm’s request to close the hearing to the public after attorneys for the city expressed that they were not in agreement with having the arbitration hearing behind closed doors.

A police report for the May 2018 incident details text messages allegedly sent by Keith while off-duty to his ex-girlfriend. The texts contained threatening language, such as "I'm so freaking pist. I'm going to end you," "Dead bitch soon," and "Die bitch die."

Keith on Thursday admitted to sending the texts and voicemails but elaborated that they were sent after he said the woman made multiple calls and texts to him, his wife and others after he had called off the affair.

He said that the woman would contact him from different phone numbers at all hours of the day and night and that he had threatened to contact her employer concerning the repeated calls, but that she had beat him to the punch, reporting him to police over the voicemails and calls.

“The ‘die’ was more like, ‘I wish you would just go away.’” Keith testified that he had also told the woman in the same text messages that he wanted her to go to another planet.

Attorneys for the city questioned Keith about why he never reported the alleged harassment from his ex-girlfriend to supervisors and instead took matters into his own hands.

During the daylong hearing, San Antonio Police Chief William McManus, who is the final say on disciplinary actions for San Antonio police officers, acknowledged that he deviated from the Complaint and Administrative Review Board’s recommendation to give Keith a less severe punishment.

“Family violence and domestic violence is a serious issue, especially here in Bexar County,” McManus said. “Bexar County has the highest rate of intimate partner assaults (and) murders, than any other county in the state of Texas. To have one of my own police officers involved in a domestic violence, terroristic threats, incidents – can’t tolerate that. Won’t tolerate that.”

Keith’s attorneys countered, saying that while Keith sent the text messages and voicemails, they weren’t physical acts of violence. Attorneys for Keith also pointed to a previous suspension in which McManus decided not to fire a separate officer who was accused in a domestic violence incident. In that case, McManus suspended the officer for 90 days.

“The only option in that was to indefinitely suspend him,” McManus told Keith’s attorneys, who asked whether he considered giving Keith a less severe punishment.

Keith said when he discussed the allegations with McManus, who subsequently fired him, he felt that the chief had already made a decision.

“I remember him asking me, ‘How would it look in the media if it came out?’” Keith told the hearing examiner.

The woman who Keith is alleged to have threatened declined to participate in any criminal or administrative case against him. While the case was forwarded to the Bexar County District Attorney’s Office, the case was rejected and Keith was never criminally charged.

The hearing examiner is expected to make a decision about whether Keith should be reinstated in the coming months.

SAPD officer fired amid allegations he was stalking ex-girlfriend

Police may no longer be able to share where they found credit card skimmers. Here's why.

Son enters plea deal after confessing to killing his mother