Funerals can be expensive, but don't have to be | Eyewitness Wants to Know

Prices for funerals and burials vary widely. KENS 5 has the tools to find the best price for the services you need. 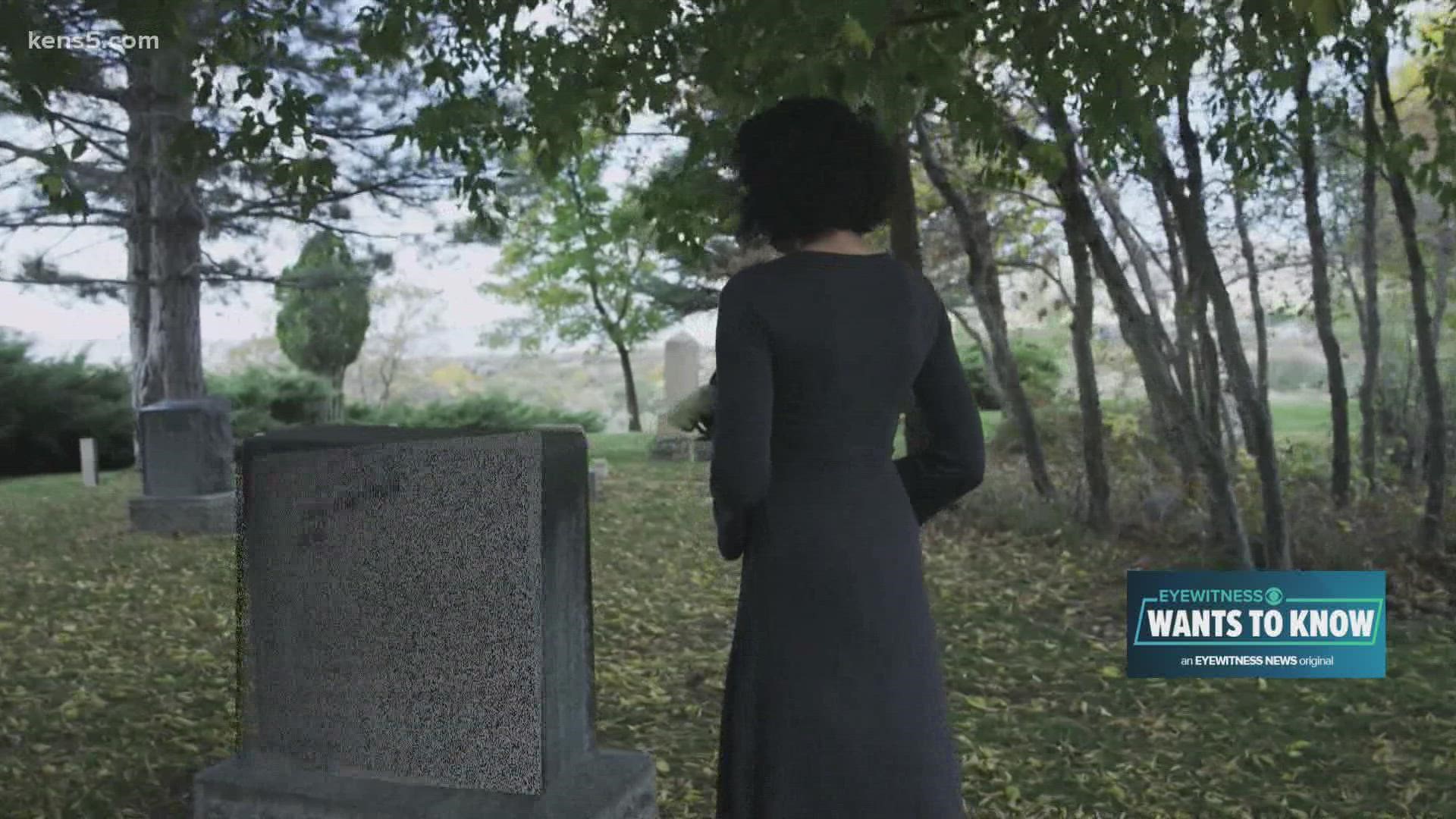 SAN ANTONIO, Texas — Funerals can come with a hefty price tag. Often, we do not think about price comparisons when grieving a loved one’s death, but doing so can pay off.

Funeral costs are not always easy to find, not even with an online search. The average cost is around $7,600, but funeral homes are not required to post prices causing sticker shock.

“It’s a wedding, a car, a house, college and a funeral,” said Ed Michael Reggie, the founder of Funeralocity.com. “Those are the most expensive things in someone’s life.”

People often do not think about price comparison for funeral and burial services, but you can save significantly with a few minutes of research.

“A traditional burial in San Antonio can be $2,135 dollars or $7,495 dollars,” said Reggie. “That’s quite a disparity. It pays to shop. It’s important that people look at this, especially given the tough times many people have had in the pandemic. It’s worth spending a few seconds and surveying the market.”

That is more than a $5,000 difference. Funeralocity.com brings transparency to pricing at funeral homes across the country.

“Ninety percent of funeral homes don’t put their prices on their websites,” said Reggie. “People should be able to look at those prices first rather than waiting in a grief-stricken state to just show up at a funeral home.”

The website captures the general price list of funeral homes. It also has four examples of services for consumers to compare including a direct cremation, a cremation with ceremony, a direct burial and a burial with ceremony.

Funeralocity.com lists some funeral homes as “excellence providers.” It indicates a funeral home was fully-vetted meaning licenses are confirmed and government standards are met. A “consumer alert” appears in red on funeral home listings that had issues in the past.

In San Antonio, the Funeral Consumers Alliance brings transparency by offering pricing lists for not just local funeral homes but also cemeteries. Cemetery costs are often not included in funeral home pricing and can add to the cost. There are no regulations when it comes to price.

“There is no standard and no state laws as standard,” said Norman Crader, president of the Funeral Consumers Alliance of San Antonio. “All the standard is, if you have a viewing and the body’s not chilled, you have to have it embalmed. There’s a few things like that, quirks I call them, but other than that, there’s not really a standard.”

The Funeral Consumers Alliance does have special pricing for members through a funeral home it contracts with, Funeral Caring USA. The savings can be considerable and membership is affordable.

The organization also helps people locate resources when they are grieving.

“Our goal is just to be helpful and compassionate,” Crader said. “Help people through the hard times.”

These price transparency services want to lay to rest the myth funerals must be pricy.

Both Crader and Reggie encourage people to preplan their funerals.

“That’s the problem we have,” Crader said. “I think it’s a general problem throughout America. What I advise people to do is look at what you want. Write it down. Get it notarized and then go the family and say this is what I want. Whatever you want, go look around at prices. Just don’t prepay.”

Crader said to instead set aside money for your last wishes and make it payable on death to cover the costs.

The Federal Trade Commission does require funeral price lists if anyone calls or comes in person. Funeral homes also cannot add on a coronavirus death surcharge.