It is an old trick with a new twist. Here's why a simple request on social media could mean less money in your wallet. 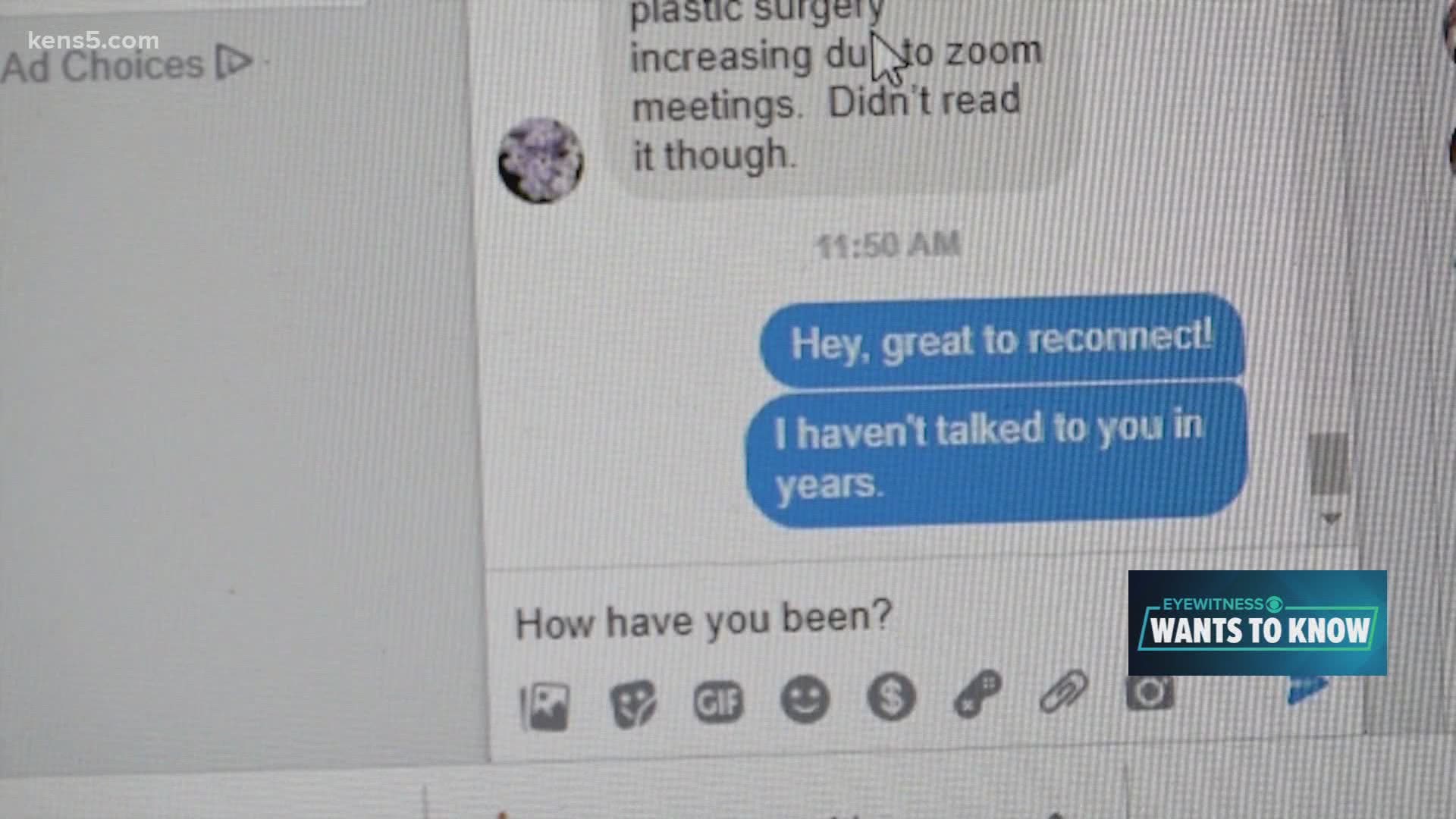 SAN ANTONIO — Facebook is terrific to stay in touch with friends, and Facebook Messenger allows you to send anyone a quick message. But be suspicious of what appears in your inbox.

“Many people are hurting,” said Jason Meza, the regional director of the Better Business Bureau. “Now with housing, with unemployment, there’s always some kind of government offer, some kind of deal or offer that maybe somebody’s not heard about.”

Yet that message could be connected to a scheme. It could be about a new grant program or a prize you qualify to receive.

“What’s different about it this time is the reports we’re seeing show the scammers are eager to get people off of Facebook Messenger,” said John Breyault, vice president of public policy, telecommunications and fraud at the National Consumers League.

They ask you to continue the conversation via text or email.

“The scammers are using it as a way to get around Facebook security systems,” Breyault said. “'Can you text me about this great new grant program I heard about or that prize I heard you qualified for?' It starts on Facebook Messenger, but then gets them off of Facebook Messenger to a platform like text messaging that’s much harder for people to monitor. So you can imagine if somebody took over their account and simply messaged a couple hundred of that person’s friends. Some of them would recognize it as a scam, report it as a scam and Facebook would shut that account down.”

If it looks like your friend it trying to help you, it is very likely it is someone you do not know who hacked an account and is posing as your loved one.

“If I got some message from some random person on the Internet, I might not trust it," said Breyault. "But if I got a message from my Uncle Bill, who I know and love, I’d be much more willing to respond.”

“It’s why you might see the friend request and think, 'Well, wait a minute, we were already friends, or that’s scam attempt,'” Meza said.

Meza said to be skeptical of any profile image that has no picture.

“Last year, Better Business Bureau received close to 600 reports of Messenger scams in the entire year,” Meza said. “But the first six months of this year, we’ve already hit 400. So we’re on trend to surpass last year, for sure.”

“Try and get straight answers from them,” Meza said. “Maybe something you and them would only know at a personal level. You want to get into those really high-level questions. The strategic questions that only you would know about. That’s when you’ll know you’re really dealing with the person.”

“If you are at all suspicious about who’s messaging you on Facebook Messenger, don’t respond,” Breyault added. “Don’t give them any kind of personal information. Contact that person in a way that you know that you’re talking to the person you think it is.

"So, call them on the phone. Send them a text message to the number that you have for them. Make sure that this is actually who they say they are. Chances are that this is somebody who doesn’t even know their Facebook accounts are compromised.”

Next, do not copy and paste any Facebook posts, because doing so could put you at a higher risk for fraud.

“Chances are that it’s actually part of some kind of list-building exercise by a marketer or, worst case, some kind of scammer,” Breyault said. “They do this because what happens when you share is that you’re creating a chain of ownership back to the person who originally started this message.

"So, let’s say Facebook realizes that it’s been a scam. They shut down that original person. That also deletes all of the messages that have been shared down the chain. The problem with copy and paste is that when you copy and paste it into a new message, you’re creating a new chain and that’s much harder for Facebook to stop.”

“It’s a way to add an extra layer of security beyond just your email address and password,” Breyault said.

Report any schemes you come across to Facebook, the Better Business Bureau and the Federal Trade Commission.

“Unfortunately, what we see is that fraud victims, there’s a stigma to reporting to that,” Breyault said. “They feel embarrassed. They’re worried about the consequences of their loved ones or friends finding out that they’ve been victim of a scam and so they don’t report it. We often hear about fraud as being the tip of the iceberg with numbers that we see publicly. In fact, there’s usually million so other people out there who are also victims.”