Bounty hunters accused of hitting fugitive with SUV before putting him in headlock, pepper spraying him 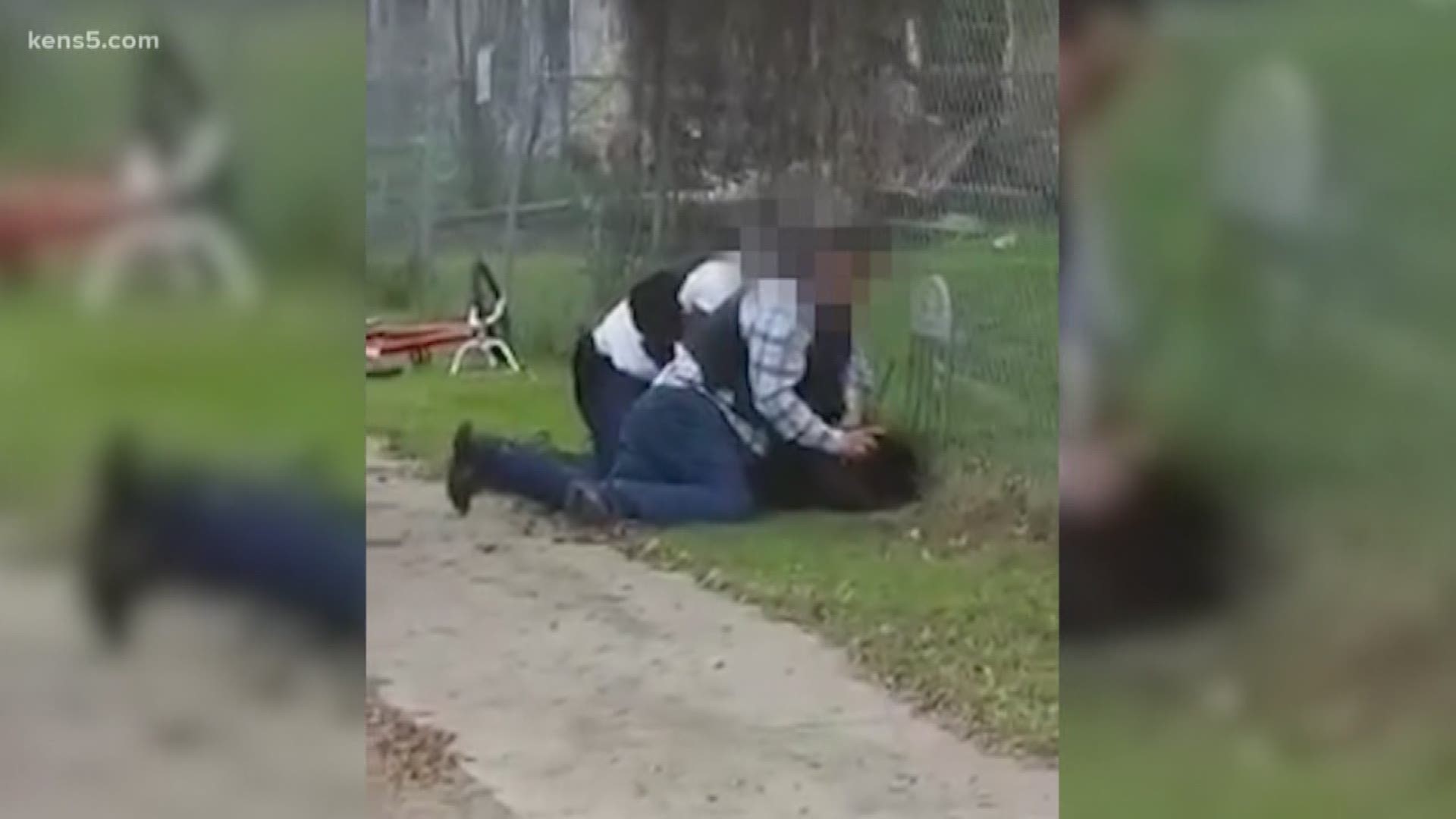 SAN ANTONIO — Videos of bounty hunters taking a wanted man down on the city's west side earlier this week are sparking concern, as some believe the pair of bounty hunters used too much force to execute the arrest.

Roland Guerra was wanted after missing a court date, leaving his bond company, Mr. Jones' Bail Bonds, on the hook for his $4,000 bond. The bond company contracted two bounty hunters to retrieve Guerra and on Monday, he was arrested just before 1 p.m. at the corner of Southwest 21st and Holly Street.

Witnesses provided KENS 5 with home surveillance video that they believe shows the bounty hunters running Guerra down with a black SUV. Other videos show the bounty hunters putting Guerra in a headlock and spraying him in the eyes and mouth at close range with pepper spray.

One witness, Daniel Miranda, said he pulled out his phone and started recording after the bounty hunters reached for their weapons when he attempted to intervene.

Miranda, who was one of the first to hear and see the takedown, said the bounty hunters never identified themselves.

"Why do they get to hit somebody with a car and get away with it?" Miranda said. "If that would've been me, I would be going to jail for aggravated assault. So why can't they be arrested and go through the court system the way we would get done if we would've done that to him? If I would've come and hit him on the bike with a car, I would be going to jail. I'd been trying to get bailed out right now."

Guerra's sister, Vanessa Guerra said, "If they think my brother belongs in jail, they for sure belong in jail."

KENS 5 went to Mr. Jones' Bail Bonds to get their side of the story. An employee there told our team the camera was not allowed inside the building and that they would have the owner contact KENS 5. The employee declined to tell KENS 5 who the bounty hunters are and who owned the bond company.

While the owner of the bond company never called KENS 5, the bounty hunters reached out stating that they had video refuting claims they struck Guerra with their vehicle and insisted Guerra was subject to the pepper spray and chokehold because he resisted arrest.

The pair of bounty hunters so far have declined to let KENS 5 see the video they said exonerates them. They also declined to share their names.

"I kept rewinding, rewinding and I thought to myself, 'but why?'" Vanessa Guerra said of the video. "Why did they pepper spray him so much? And then they want him to give them his hands so they can handcuff him. But how?"

The bounty hunters called police and emergency medical services following the arrest. They claimed Roland Guerra swallowed heroin while running from them. Roland Guerra's family said they did not know him to use heroin, adding that they have not seen medical records corroborating the allegations.

Guerra's family said bounty hunters contacted them hours after he was taken into custody, stating they would put money into Guerra's commissary account at the Bexar County Jail. After repeatedly denying such agreement to KENS 5, one of the bounty hunters eventually said they often make arrangements to give fugitives a share of the money so they will cooperate.

“Our agreement with (Roland Guerra) was, 'If you don’t try to run or anything, we might take care of you and put some money on your books,'” one bounty hunter said.

Texas law states bounty hunters may use reasonable force to detain a wanted person. Longtime criminal defense attorney Robert Gebbia said the videos shown to him by KENS 5 depicted force that was anything but reasonable.

"If you were to tell me that outside of this extreme behavior that they took it even further to pepper spray them and put them in a headlock, I would say that that would be even a greater indicator that this person was operating outside of the law," Gebbia said.

Gebbia, who has practiced law for more than a decade, said he believes the video depicted "extreme" conduct.

"If this information were forwarded to a law enforcement authority, or if the chief of police were to see this, or if the district attorney's office were to see this, I would expect that they would agree with me that this is unlawful behavior," Gebbia said. "Many of my clients as a criminal defense attorney have been arrested for much less."

The Guerra family filed a report with the San Antonio Police Department and have since retained an attorney.

Police said they are following up on the investigation and will prepare a case packet to forward to the Texas Department of Public Safety for review. Neither bounty hunter has been charged in connection with the incident.

What are bounty hunters authorized to do?

The Texas Department of Public Safety regulates bounty hunters. The agency's website states that a bounty hunter may not enter the home of another without their consent, even if they have an arrest warrant which they are executing on behalf of a bail bond surety.

They also may not "wear, carry, or display any uniform, badge, shield, or other insignia or emblem that implies that the private investigator is an employee, officer, or agent of the federal government, the state, or a political subdivision of the state."

The DPS website contains more guidance on what bounty hunters may or may not do.

Owners of other bail bond companies declined to be interviewed for the story, but the owner of one company said the bail bond company has little to do with the means by which a bounty hunter takes a fugitive into custody.

RELATED: VERIFY: Why Lysol already knew about the coronavirus and can its products really fight it?

RELATED: VERIFY: If you think your vintage CorningWare is worth $10,000 -- think again!