More COVID-19 vaccines wasted by Austin providers than any other Texas city, except Houston

A KVUE Defenders analysis found providers in Austin have wasted more than 300 doses of the vaccine so far. 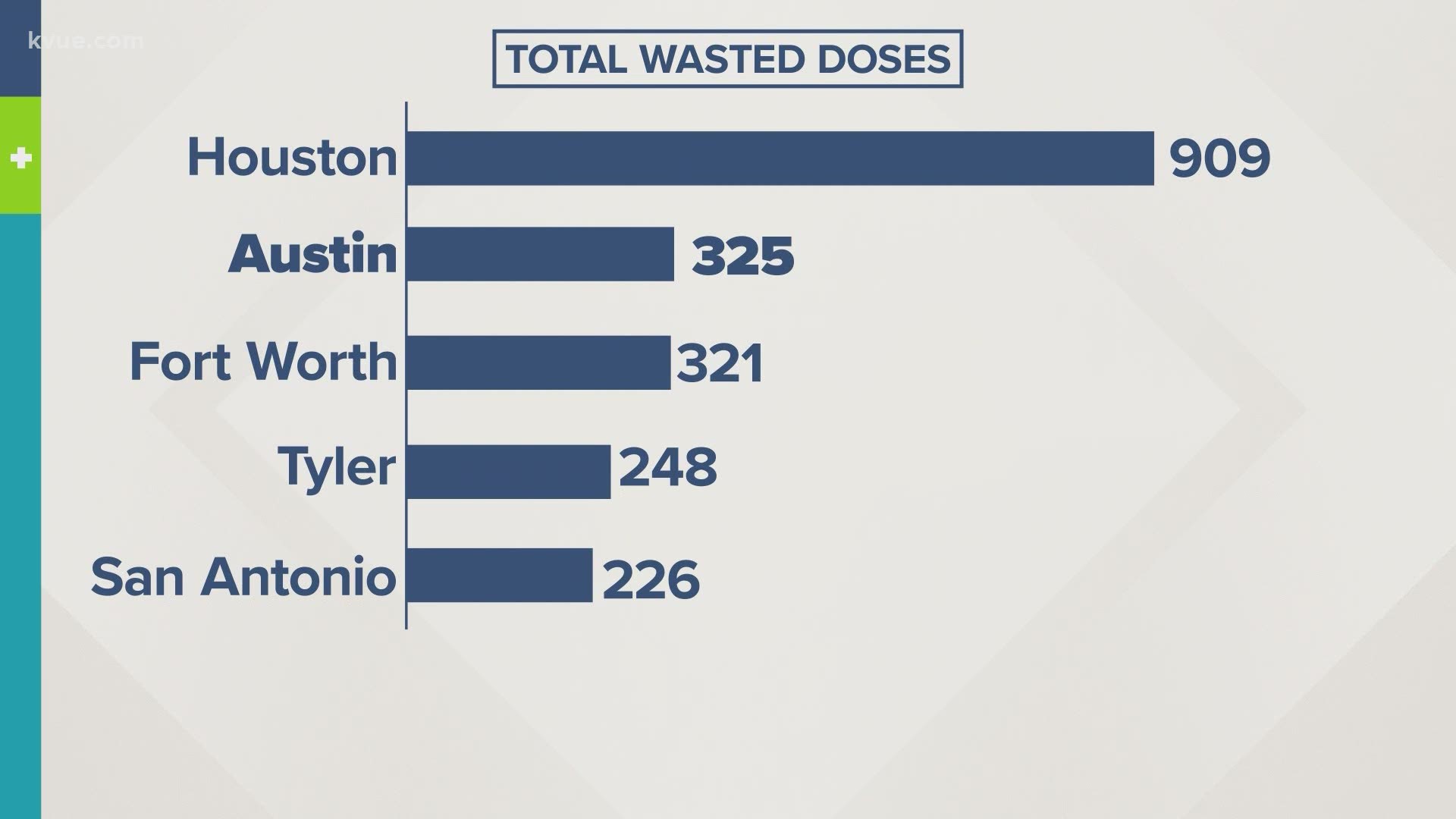 AUSTIN, Texas — Across Texas, 4,000 doses of the COVID-19 vaccine have been wasted so far. Those were shots that could have gone to people willing to get the vaccine, but they were thrown out instead.

A KVUE Defenders investigation found Austin providers have wasted more doses than almost every other city in Texas.

Credit: KVUE
Austin providers have wasted more doses of the COVID-19 vaccine than providers in any other city, except for Houston, according to DSHS data.

Using data from the Texas Department of State Health Services, KVUE calculated all the COVID-19 vaccine doses wasted in Texas cities so far.

Austin ranks second on that list, behind only Houston.

The KVUE Defenders also analyzed the providers that have wasted the most doses as a percent of how many the state sent them.

One of those facilities in the top 10 is in Travis County: Orthopaedic Specialists of Austin, which wasted 32% of what it's been given.

Statewide, the DSHS data shows providers have wasted 4,331 doses of the vaccine since the rollout began.

Credit: KVUE
More than 4,000 COVID-19 vaccine doses have been wasted in Texas, and more than 1,400 of those are from power outages during the winter storm.

The winter storms last month didn’t help – 1,477 doses were wasted because of a natural disaster or power outage.

But KVUE looked more closely and found out Austin just barely falls in the top 10 cities for the number of doses wasted during the storm. Austin providers only had to throw out 50 of the doses because of those power outages.

Credit: KVUE
Austin ranks in the top 10 cities in Texas that had to waste COVID-19 vaccine doses because of the winter storm.

A spokesperson from the Department of State Health Services sent KVUE the following response to our findings:

“The amount of doses wasted is .07% of the amount of doses shipped. The total amount reported as wasted by providers in Travis County is 326 doses out of over 350,00 doses shipped to Travis County. Providers have been doing a great job of making sure that doses get into arms. As you know, there was an unprecedented weather event that caused widespread power outages across the state a few weeks ago. We saw a relatively small increase in doses that were wasted due to power outages reported after the storm. I don’t know that comparing the number of doses wasted by city shows you anything except possibly where there were more power outages. The vaccine is sent to individual providers and where the providers are located doesn’t have any bearing on if something caused a dose of vaccine to be wasted.”