Hog hunting controversy: Why poison approval has many upset

For years, Texans have been united on the war against feral hogs. The invasive species causes millions of dollars in damage to properties every year. However, there's a new battle brewing when it comes to how the state tries to get rid of the animals, since Texas recently approved a controversial method of killing hogs. 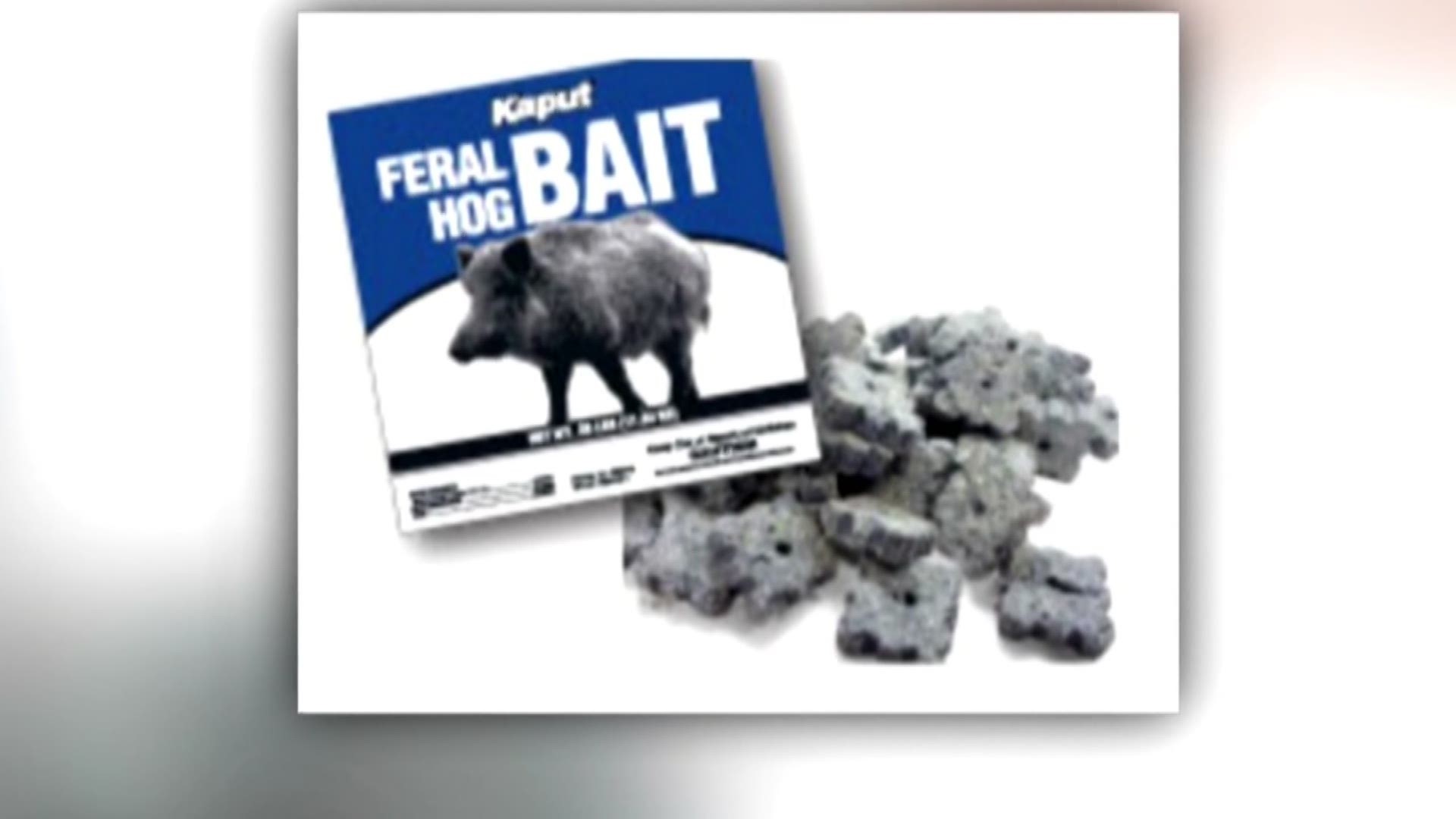 For years, Texans have been united on the war against feral hogs. The invasive species causes millions of dollars in damage to properties every year. However, there’s a new battle brewing when it comes to how the state tries to get rid of the animals, since Texas recently approved a controversial method of killing hogs.

Eyewitness News spent the past month traveling across Texas to see the different methods currently being used to eradicate the destructive animals.

There are two primary ways of getting rid of feral hogs: Trapping and hunting. Eyewitness News spent one day out with about a dozen hog-hunting dogs.

“It’s the smell, the instinct and their drive. It's what they love to do,” said J.C. Cassens of Wild Boar USA.

Each dog wears a collar with a GPS tracker, so we could monitor their every move.

A group of Black Mouth Curs are released first at a spot where the hogs have been seen, or where damage is evident. The dogs let their noses do the work, and it doesn’t take long before they come across a hog and start barking. Usually, a pretty good chase ensues.

1 / 14
In the wake of the controversy over a proposed poison to kill feral hogs statewide, KENS 5 explored different ways people are taking matters into their own hands and hunting the hogs across Texas. (PHOTOS: Phil Anaya/ Special to KENS5.com)

Once the GPS shows they’ve stopped moving, that means the dogs have a hog cornered. That’s when bigger Pit Bull catch dogs are let loose as reinforcement to hold down the aggressive hogs that can weigh hundreds of pounds.

You can hear the dogs doing their job. The squeal from the pig is even louder. While it might sound disturbing, the dogs are just doing what they’ve been trained to do. Shortly after the dogs nabbed their first pig, just minutes later, they were chasing another hog.

The biggest advantage to hunting with a dog is not only said to be their sense of smell, but also the ability to reach difficult place where hogs can hide.

Ashley Campbell of Diamond A Kennels said dogs are not only helping ranchers rid their fields of feral hogs, but they also typically feed families with the pigs' meat.

“We actually have a family that wants to eat them. They already told me to bring them some. They’ll make this into tamales, ground pork or summer sausage,” said Campbell.

Then, there’s hunting by air.

Joe Walz owns Heli Hog Hunt, which takes people up in the sky for hunts ever since it was legalized in Texas.

“Sometimes people get into arguments of what’s the best controlled method. Is it trapping? Is it hog doge? Is it just traditional hunting? Experts at Texas A&M University have said helicopters are the most effective,” said Walz.

That’s because the hogs can’t outrun the helicopter, and hunters can fly over a group of them when they run through a field. Walz said they can typically take out a couple hundred hogs in a weekend. He also said it’s a win-win because they don’t charge a dime to landowners to get rid of the hogs, since the ranchers are giving them access their land.

“We’ve never charged a land owner, a farmer or rancher. No matter what they’re doing with their land, if they don’t want the hogs there, we’ll come out for free,” said Walz.

However, their hard work is only maintaining the problem.

“No matter what I do, I’m never going to put an end to the population. I may give some relief to a farmer, or ranch for three months, four months, but the hogs are moving in. They will never disappear completely,” said Walz.

Feral hogs have been documented in 253 out of 254 counties in Texas.

On the day we went on a hunt with Walz in Eagle Lake southwest of Houston, we witnessed one of the many challenges. It was a windy day, so the hogs were hunkering down. They were nowhere to be found, although their destruction was clearly visible. One hog finally made a run for it and was shot.

Despite the on-going war on the invasive species, there’s still an estimated two to four million feral hogs that have been documented in all but one of the state’s 254 counties. The pigs cause an estimated 52 million dollars in damages to ranches and farms. However, it doesn’t stop there.

SARA provided Eyewitness News with some photos of the hogs. SARA has trapped and taken photos of the damage the hogs have left behind. While it might not look like much to some, SARA has also found traces of E. coli in the San Antonio River caused by feces.

“We’ve done some work trying to find out what is the source of this fecal organism, and a lot of it is pointing back to feral hogs,” said Nasto.

“This is not my first attempt to eradicate feral hogs in Texas,” said Agriculture Commissioner Sid Miller.

As a way to help farmers and ranchers fight back against the destructive hogs, Miller approved an “emergency rule change” allowing the use of a pesticide on feral hogs. The same pesticide used to kill mice and rats.

“It’s a matter of survival for these farmers. It’s one more tool that they can use to eradicate the feral hogs, so they can continue to operate their family farms,” said Miller.

The bait is made up of Warfarin, a prescription commonly used by humans as a blood thinner. Miller said the EPA approved it for full use, but he decided to put heavy restrictions on it’s use.

Still, the approval of the pesticide has been met by stiff opposition, especially from people concerned about any adverse effects the drug could have on other animals.

“You know, because you have a deer that comes up and eats it he dies. A buzzard comes up and eats the deer ,he dies. Then you have the coons that eat the leftovers on the ground, they die. You never know, it’s just a chain reaction,“ said Robert Goins.

“I know for a fact that my hogs go in to eat the corn, and then the deer go in right behind them and eat the corn, same corn they’ve been eating out of. It’s hard to say what would happen,” said Goins.

“The hogs can go miles from your place and die. They can go in the middle of a corn crop that’s supposed to be harvested for our consumption and die. In no way is that sanitary,” said Campbell.

The EPA-approved label does say “this product may be toxic to fish, birds and other wildlife.” It also states livestock should not graze on baited areas, requiring livestock be removed and excluded from baited areas for at least 90 days.

“If you can’t touch the dead animal without gloves, if you have to bury the animal 18 in. underground so that scavengers don’t get it because it can affect those scavengers, then it’s something that shouldn’t be laying around in fields,” said Walz.

However, Miller dismisses these concerns, saying there’s so little Warfarin actually used in the bait to harm other animals.

“A dog would have to eat 175 lbs. of it, before it would kill him. A cow would have to eat 8,000 lbs. As far as scavengers feeding on the feral hog carcasses, it’s not going to harm the eagles, the buzzards or the coyotes whatsoever,” said Miller.

“If you can’t have it around kids, children or other livestock, that right there throws up a big red flag for anything we do in this industry,” said Campbell.

The Texas Hog Hunters Association has an online petition to stop the use of Warfarin on feral hogs.

No one can currently use the hog bait in question because a state judge issued a temporary restraining order earlier this month. That order expires at the end of the March. There’s also two state lawmakers, one Republican and one Democrat, who have filed bills on the issue.

Basically legislation that calls for more research and studies of the pesticide before it can be used on hogs in Texas.