The Yankees and Mets, Navy and Air Force, NASCAR and more took time to remember those lost on Sept. 11, 2001. 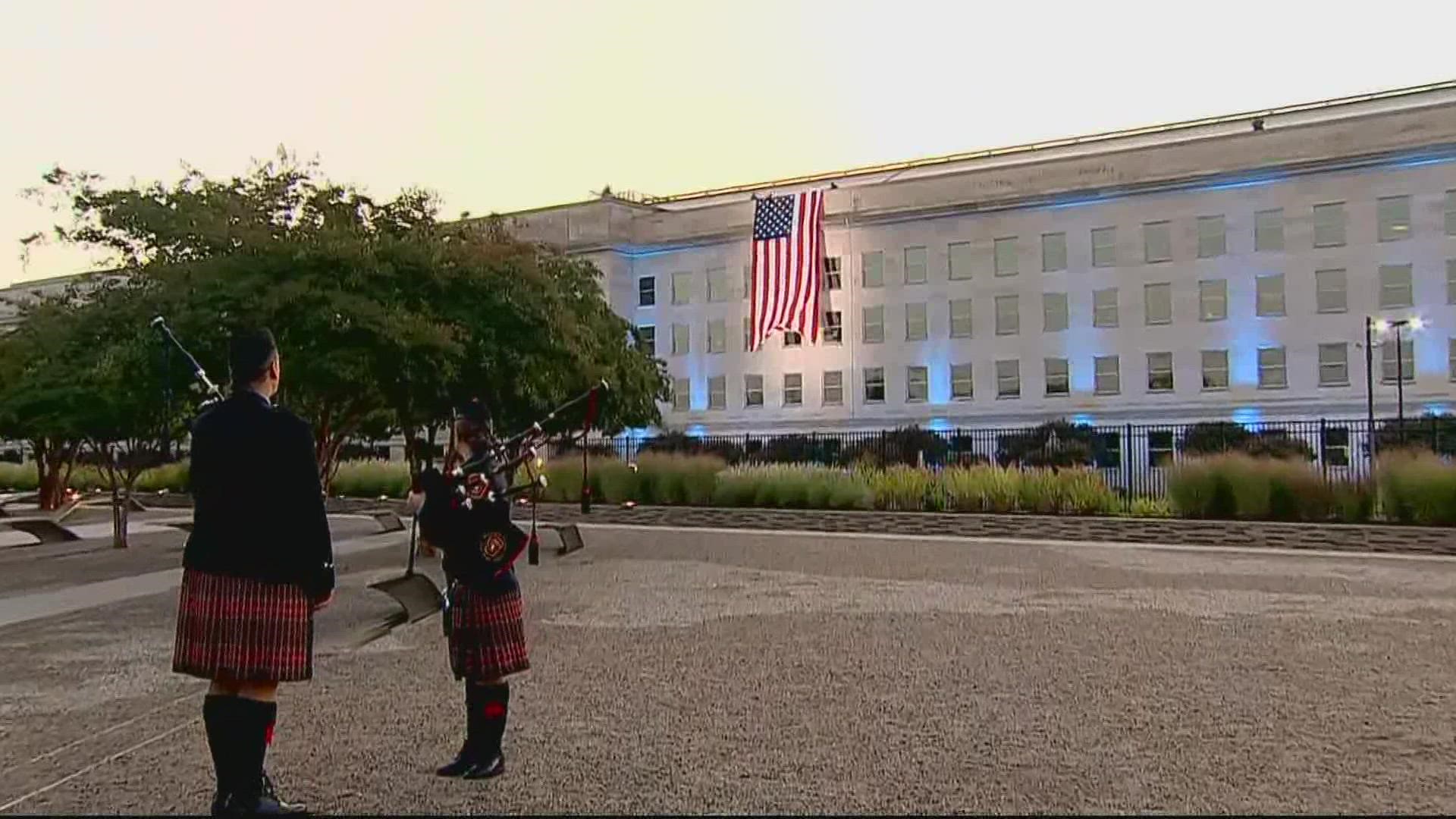 Jacob deGrom stood next to Gerrit Cole along the first-base line, and Brandon Nimmo wedged between Aaron Judge and Giancarlo Stanton on the other side.

Shoulder to shoulder and interspersed, players from the New York Mets and Yankees shared the diamond during the national anthem Saturday night at Citi Field with first responders, former players and a giant ribbon imprinted with the American flag.

The city's baseball teams held a Subway Series game on Sept. 11 for the first time on the 20th anniversary of the 9/11 attacks, as stadium's around the country paid tribute to the nearly 3,000 killed in the terrorist attacks. A raucous, emotional crowd packed the stadium in Flushing 45 minutes before first pitch, waving American flags and holding signs promising to “Never Forget" during a ceremony that included over a dozen Mets players from the 2001 team and representatives from several organizations and charities related to first responders and victims.

The stadium buzzed in a way it hasn't since before the coronavirus pandemic as Mike Piazza, John Franco and other Mets alumni accompanied members of New York's fire, police, EMT, sanitation, correction and court officers along the outfield warning track.

“Very emotional night,” Yankees star Aaron Judge said. “But it was good to have everybody together for the city. It was a great game.”

The sellout crowd of 43,144 buzzed in a way it hasn't since before the coronavirus pandemic as Mike Piazza, John Franco and other Mets alumni accompanied members of New York's fire, police, EMT, sanitation, correction and court officers along the outfield warning track.

The loudest cheers came for Piazza, a Hall of Famer who memorably hit the go-ahead homer in the eighth inning when the Mets beat the Atlanta Braves on Sept. 21, 2001, in the team’s first game back at Shea Stadium. Highlights of that game were played on the video board before Bobby Valentine and Joe Torre — the 2001 managers of the Mets and Yankees, respectively — threw the ceremonial first pitches.

“For me, especially when this date comes by every year, it is difficult to kind of look back, and the images, for me and I’m sure a lot of people, are still very vivid in their minds," Piazza said. "I think it’s a wonderful thing that we do, continue to honor them.”

In a sign, perhaps, of how much healing has happened since, fans in Queens booed loudly when Yankees star DJ LeMahieu was introduced for the game's first at-bat. The energy persisted through a back-and-forth, 8-7 victory by the Yankees.

“It was great, it really was,” Yankees manager Aaron Boone said. “Weather-wise, perfect, packed to the gills the different chanting and cheering, a litle bit of that for one night I think probably both sides have a little compassion for each other. I think it felt that way, anyway. The ‘USA!’ chants, it felt like a unified crowd, and that was nice to be a part of.”

Both teams wore hats representing New York’s first responders, two years after Mets slugger Pete Alonso said the league rejected his proposal for specially designed caps doing the same. Alonso instead had custom cleats made for each of his teammates — without asking MLB for permission — and later donated his shoes to the National September 11 Memorial & Museum.

Alonso, who was 6 years old and living in Tampa, Florida, at the time of the attacks, has made multiple visits to the museum and was at Ground Zero on Saturday morning, part of ongoing work he’s done to benefit 9/11 survivors still plagued by health woes caused by exposure to the rubble.

“Today is a day of remembrance,” Alonso said. “Not just that day, but there’s still people being impacted every single day.”

Navy and Air Force played football on the earliest date in the calendar for a rivalry that dates to 1960. When the two service academies announced late last year that the game was being moved from its usual spot in early October, no explanation was needed.

Navy-Air Force took center stage to some degree as the American sports world observed the 20th anniversary of the 9/11 attacks. Players from both teams carried flags onto the field before kickoff. There was a moment of silence before the national anthem, and then a flyover featuring two Lockheed Martin F-35B Lightnings and two Boeing F/A-18 Hornets.

With the American flag in hand, the Navy Midshipmen and Air Force Falcons take the field. pic.twitter.com/6U4vMgY8e8

During a halftime signing of America the Beautiful, midshipmen unfurled a large American flag, and the names of Navy and Air Force grads lost on 9/11 were put on the videoboard.

“It hits us very closely," Navy coach Ken Niumatalolo said. "Have some players on our team — I think all of us in this room knows somebody that was there, or a relative or a friend. And so, I thought the great thing for just this day, we were just all Americans. And just remembering people from 9/11.”

Elsewhere, Army's players also carried flags onto the field for their home game against Western Kentucky. At Nebraska, former Navy SEAL Damian Jackson, a 29-year-old backup linebacker, led the Cornhuskers onto the field carrying a flag and flanked by first responders, including a health care worker.

Nebraska coach Scott Frost presented the family of fallen Marine Cpl. Daegan Page with a Cornhuskers jersey before the game. Page was one of 13 U.S. service members killed Aug. 26 in a terrorist bombing at the Kabul airport in Afghanistan. The 23-year-old Page was from Omaha.

At Minnesota’s game against Miami of Ohio, the family of the late Tom Burnett Jr. was honored on the field after the first quarter. Burnett, a native of Minnesota, was one of the passengers on Flight 93, which crash-landed in rural Pennsylvania on 9/11.

In a ceremony before its game against Kennesaw State, Georgia Tech recognized Atlanta police officer and former New York City paramedic Jay Pagan, who worked at the Twin Towers on search and rescue following the attacks and was trapped in debris. Pagan was presented the game ball in a pregame Heroes Day ceremony.

Boston College wore its red bandana uniforms against Massachusetts, and names were replaced by “For Welles.” Since 2014, the Eagles have occasionally worn uniforms with red bandana trim in memory of Welles Crowther, a former BC lacrosse player who died helping to rescue people from the World Trade Center during the 2001 attack. Survivors identified Crowther by the red bandana that he was known for wearing at all times.

At the U.S. Open in New York, before the start of a women’s final between two players who weren’t even born yet on 9/11, female cadets from the U.S. Military Academy unfurled a giant American flag that covered almost the entire court at Arthur Ashe Stadium. While Britain’s Emma Raducanu, 18, and Canada’s Leylah Fernandez, 19, played, “9/11/01” was stenciled on the side of the court.

"I just want to say that I hope I can be as strong and resilient as New York has been the past twenty years."@leylahfernandez shared a message of support for New Yorkers on 9/11.

At Richmond Raceway in Virginia, an 1,100-pound piece of steel from the Twin Towers was on display on the midway, along with a Wall of Remembrance. Cub Scouts led the Pledge of Allegiance before the afternoon NASCAR Xfinity race kicked off a racing doubleheader.

Dale Earnhardt Jr. was racing in the Xfinity race for his only race of the year before moving to the NBC booth for the Cup race later Saturday. Earnhardt won NASCAR’s first Cup race back when the series resumed after the week off for 9/11.

Earnhardt, who had also lost his father in February of that year, held the American flag out his car window during the celebratory burnouts in an image associated with the sport and its 9/11 tributes.

20 Years Later, The Impact Of Nascar’s First Race After 9/11 Lives On https://t.co/bzA0gQNTxk pic.twitter.com/XN2l2qPVrL

“I feel kind of connected to that date because of what happened in our sport when we went back to Dover and with what was going on in my own life that year,” Earnhardt Jr. said Friday. “It was a very challenging year. I think it’s important that we continue to remember and honor everyone affected by (9/11) all these years later."

On Sept. 11, 2001, IndyCar was already in Germany (as the CART Series) preparing for its weekend race — and was the only U.S.-based series to compete that weekend. On Saturday at Portland International Raceway, the teams were summoned to the grid for a 15-second moment of silence.