Bob Hart built the 9/11 memorial in the woods near his home outside Athens. 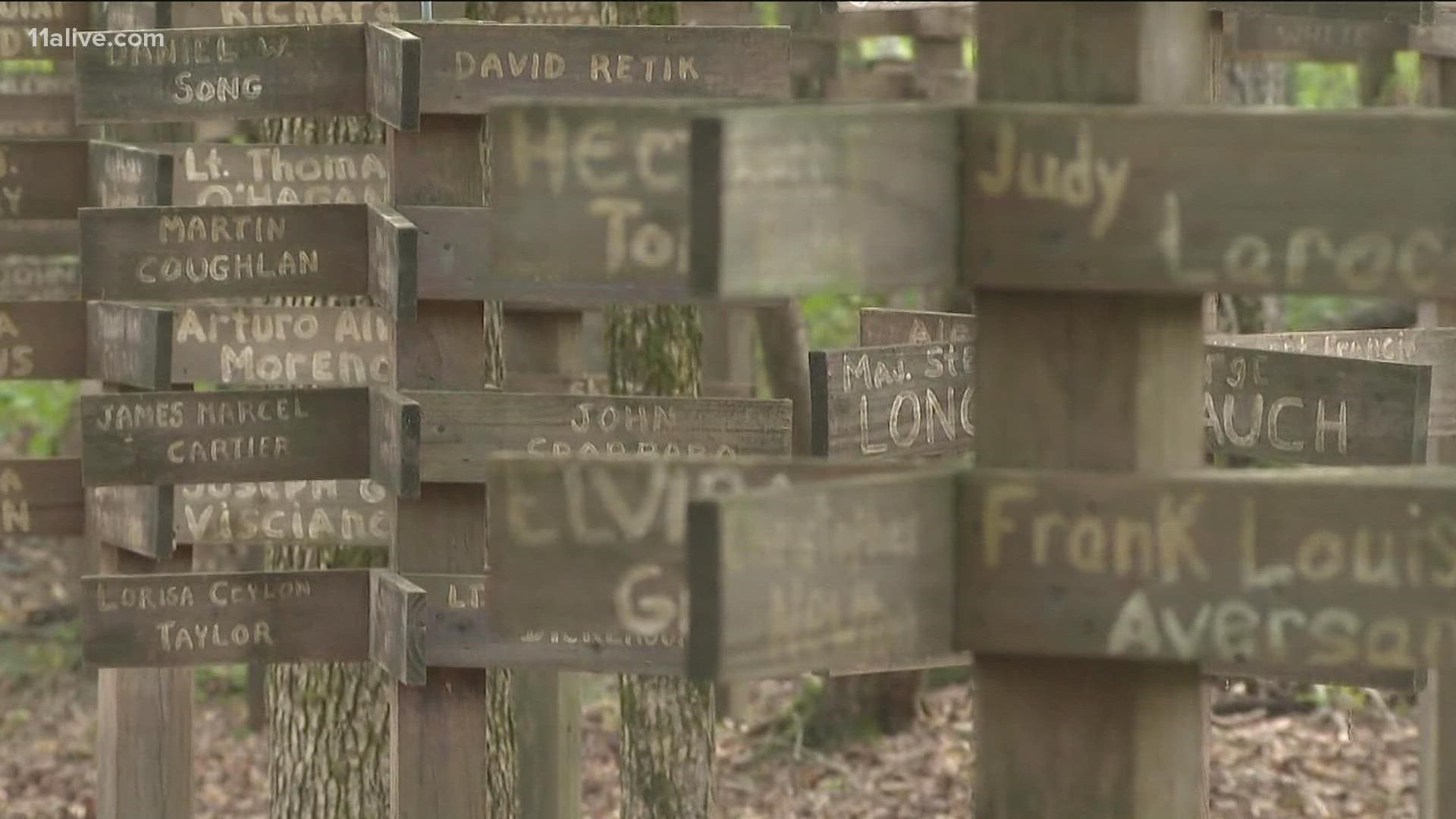 ATHENS, Ga. — For the past 20 years, every day, year in and year out, in a quiet patch of woods just outside Athens, in rural Clarke County, one man’s homemade memorial to those who lost their lives on September 11 has stood the test of time.

There's no advertisement, no admission, just a guest book where people pour their hearts to him about how much it means to them to remember that day, and their loved ones, while in the embrace of those tranquil woods.

For Bob Hart, the man who made it, the monument is a personal prayer for all those killed on September 11, their family, and their friends.

Hart came up with the idea for the memorial while visiting New York City just after the attacks.

“The effect that it had on me, I said I had to do something. So, I decided to go ahead and do it,” he added, knowing that the official memorials in New York and Washington D.C. would take years to complete.

Hart painted every single name of every person, some 3,000 names, on posts that he organized along a 300-yard path that he’d cleared in the woods. He added folk art and symbols of the sites where people were killed, in New York, Washington D.C., and Shanksville, Pennsylvania.

Friends and neighbors helped him construct it, and Hart said that, for him, it was a way to seek some peace, honoring everyone that way in the solitude of the woods. He never thought anyone would visit.

So, there are no signs for the memorial anywhere along the country roads. And it is off of a dead-end street about 10 miles outside of Athens. Anyone going there would have to go out of their way to find it.

Yet somehow, word of mouth spread exponentially. People started hearing about the memorial, searching for it, finding their way to it.

“I’m glad I did it and maintained it all these years, "because it has meant a lot to people," Hart said.

Credit: WXIA
Bob Hart, at the 9/11 Memorial Trail near Athens

RELATED: 20 years after 9/11 terrorist attacks, legacy of ‘the man in the red bandana’ stronger than ever

At first, Hart didn’t notice that anyone was visiting, but not long after completing the project, he saw a bouquet beneath one of the names one day.

“I just started to cry,” he said, “Because I knew somebody had, obviously, come out here and put those flowers by somebody they knew had died.”

That’s when Hart decided to leave a guest book for visitors to sign.

Now, that visitors log has become a diary, nearly twenty years long, of people pouring out their hearts to Bob Hart, thanking him.

“A beautiful memorial,” wrote one woman, “I was nine years old when my dad was killed" at the World Trade Center, "his name is on the pole… thank you so much.”

“God bless you,” another visitor wrote. “It was a difficult walk… I had to explain to my five-year-old (about) that day in history that led me to enlist” in the military.

One person wrote about the man who often comes to “visit” his wife Kathryn and her fellow crewmates killed on United 175. “It is a comfort to come here.”

“The trail is still here, and people are still coming out, not as many as during those first years, but people still come out here,” Hart said. “I think I’ve got about five filled visitors logs now. I don’t want these people to be forgotten; they’re people whose lives were taken just like that; we lost people who had families who loved them. We need to remember them.”

Visitors to the memorial see the names of individuals like Betty Dingle’s son, Jeffrey.

“He was my joy,” Betty told 11Alive 20 years ago from her home in Tucker, “He was my friend. He was everything.”

Others include Jeremy Glick, one of the passengers on United 93 who helped overpower the hijackers and bring the plane down before it hit its target in DC.

Then there's flight attendant CeeCee Lyons, who was also on that hijacked airliner. She was able to call her family from the plane and say goodbye. Her cousin, Ron Ford of Alpharetta, told 11Alive News, soon after, how much she loved her husband and her kids, adding “CeeCee kept her cool.”

Hart is now retired but is devoted to preserving the memorial, trying to keep up with the maintenance, on his own and with friends.

“Twenty years has taken its age, the names are starting to fade, the paint’s been out there for twenty years."

Hart said when he lets himself experience the serenity of the memorial, amidst all the names, he thinks of how they represent 3,000 stories of 3,000 lives, and remembers how important it is for those who survived, and for everyone now, to live and love, passionately--no promise of tomorrow.

For Hart, the quiet memorial shouts to the heavens.

The 9/11 Memorial Trail is at 320 Morton Farms Lane in Athens, Georgia.