A look back at Maine's history with presidential visits

From Roosevelt and Taft to Obama and Bush, Maine has a rich history of presidential visits. On Friday, Donald Trump was added to that list. 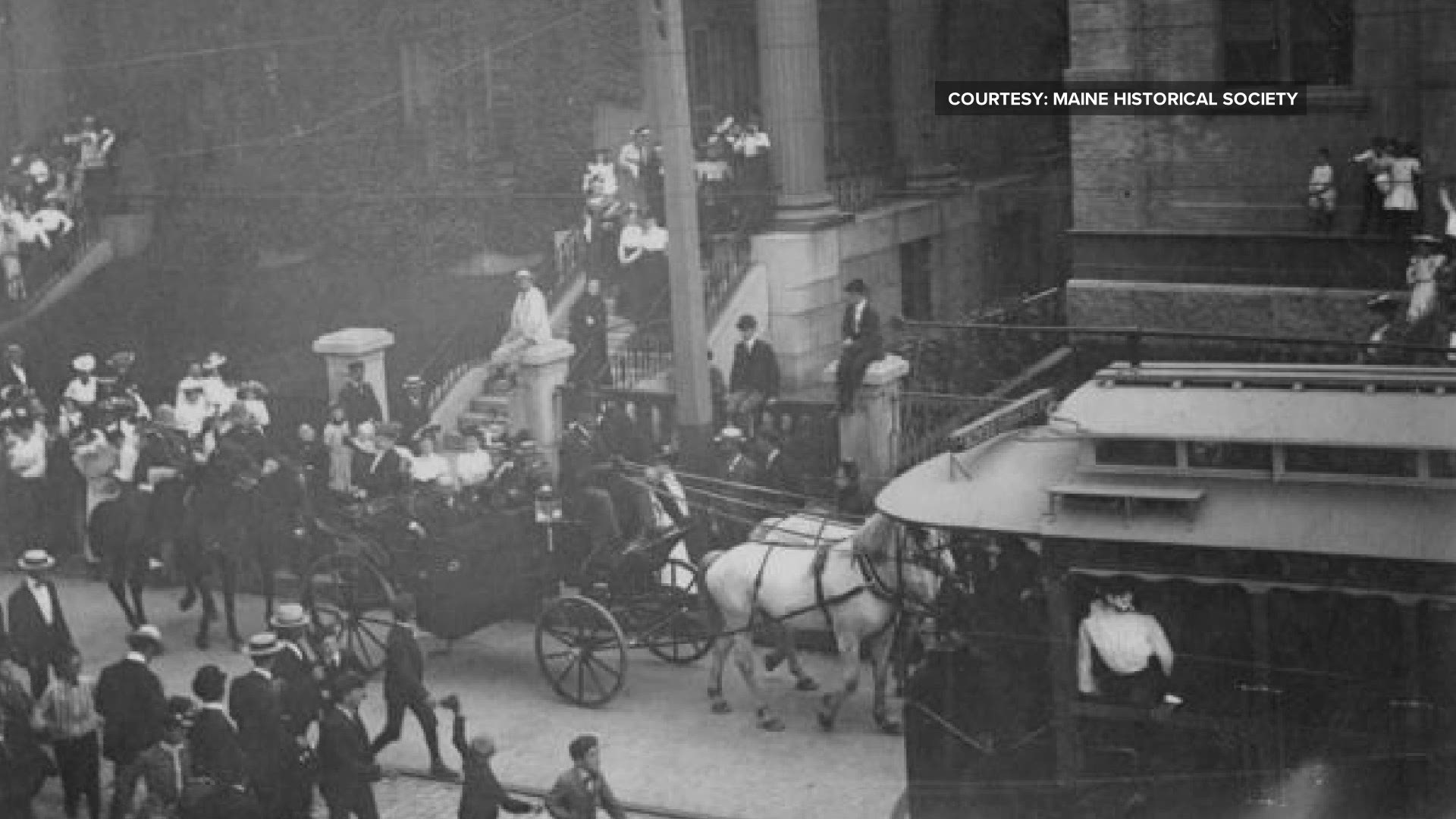 MAINE, USA — It may be surprising that as small as we are, Maine has actually been visited by many U.S. Presidents over the past century or more.

Of course, it's well-known that the Bush's have a long history of spending their summers in Kennebunkport, but presidents dating back to the turn of the century and earlier have visited too.

The first president to visit Maine was James Polk in 1847. Polk traveled by train from Boston to Portland and later to Augusta.

In August of 1873, President Ulysses S. Grant came to Augusta by train for a 3-day visit with U.S. Speaker of the House James G. Blaine.

In 1889, President Benjamin Harrison visited Bath to inspect the conditions of the city's harbor and shipyards. According to the Maine Maritime Museum, this led to Bath Iron Works pursuing a contract for two steel gunboats, which was awarded and led to the first Maine-built steel vessels.

President Theodore (Teddy) Roosevelt made multiple trips to Maine. He first came to Maine as a college student to hunt bear, meeting two guides who went onto become longtime friends, even working with Teddy for more than a year on his North Dakota ranch. Roosevelt climbed Katahdin and hunted the woods several times.

He later came back as President to Portland in 1902 and also to Bangor where he spoke from the Bangor House. Roosevelt also visited former Secretary of State Blaine on his trip to Augusta. He later stopped in Waterville on his tour of Maine.

Roosevelt's successor William Howard Taft came to Bar Harbor, playing golf at Kebo Valley where he was said to have taken more than a dozen shots from one sandtrap.

Taft made an extended trip to Maine in July of 1910, making stops in Eastport, Bangor, Ellsworth, Rockland, and Islesboro. He based his operations in Bar Harbor, where he stayed on a 273-foot presidential yacht named Mayflower, which had a crew of 200, according to the New England Historical Society.

“The three days that have passed in Bar Harbor will be red letter days in my life,” Taft told a crowd in Bar Harbor. “The air is like champagne in a Prohibition state, and without the uncomfortable consequences that follow imbibing that liquor.”

President Calvin Coolidge came to Portland in 1922. He was Vice President at the time. According to the Portland Press Herald, Passamaquoddy historian Donald Soctomah says Coolidge also fished at Sysladobsis Lake in Washington County.

FDR had his famous summer “cottage” on Campobello Island in New Brunswick, just a mile or so across the water from Lubec. He sailed Passamaquoddy Bay and nearby waters for years.

In 1941, FDR made a surprise visit to Rockland, following a top-secret meeting with Winston Churchill in Newfoundland. Roosevelt sailed into Rockland ion the Presidential yacht, virtually unannounced. A crowd soon formed and followed the president in a convertible to the Rockland train station, where he boarded the train back to Washington.

His wife Eleanor was in Lewiston in the 1930s to visit the home of John Clifford, who was the U.S. Attorney for Maine and an active organizer for the Maine Democratic Party.

Harry Truman visited South Portland in 1942 when he a Senator and gave a speech about shipbuilding efforts during the war.

President Dwight D. Eisenhower spent time vacationing in the Rangley lakes in 1955 and drew huge crowds in Pittsfield, Farmington, and in Skowhegan. He appeared with Senator Margaret Chase Smith and then-Governor Ed Muskie, who would later run for President himself, 17 years later.

JFK made multiple trips to Maine. He visited Bristol and Boothbay Harbor, staying with Senator John Tunney at his island cottage near Pemaquid Beach, and going to mass at the Catholic church.

"He was never happier than when at the tiller of a sailboat, steering the course, chomping on a small cigar, lunching on fish chowder, and bantering with family and friends," the book Away from the White House says.

His last visit in October of 1963, he spoke to a large crowd at the University of Maine in Orono just a month before he was assassinated.

Lyndon B. Johnson came at least twice: a campaign stop in Portland, and later a visit to Lewiston, where he spoke at Kennedy Park. Along the way he made local history in Topsham, stopping for ice cream at the Dairy Queen, which is still in business. For more than 50 years the DQ location a sign reading “LBJ Ate Here” has hung.

President Nixon was at Loring Air Force Base on his way back from the Soviet Union on July 4, 1974, about a month before he was forced to resign.

President Gerald Ford traveled to Maine in August of 1975 to participate in a Field Day Program for mentally disabled children in Portland. He also attended a Republican luncheon. Mayor Harold Loring gave Ford a key to the city and unveiled a plaque declaring August 30, 1975 "President Ford Day in Portland."

Jimmy Carter Was in Bangor multiple times. He visited the city before launching his campaign for the White House. Most famously Carter came to the Queen City in 1978..when he spoke at the Bangor Auditorium ..then stayed the night in the home of the Murray family. After leaving office, Carter stopped in Bangor several times on flights back from overseas.

Ronald Reagan never came, but President George H. W. Bush made up for it, reveling in visits to Walker’s Point. He said he spent part of every summer of his life there except when he went to war. And Maine loved him for it.

Bill Clinton was here several times including an early-morning campaign visit on election day 1996 in Bangor. A jet-age version of a whistle-stop, he landed, talked to a large and cheering crowd inside an airplane hangar, then headed off to his next airport. He has been back several times since, most recently last fall, at the University of New England in Biddeford.

Like his father, George W. Bush knows Maine well, having spent part of his growing up years at Walker’s Point. He now owns the main house, which used to belong to his parents.

Barack Obama has been to Maine a few times. The most memorable was when he brought his family to Acadia National Park to vacation for a few days in July 2010. Obama has also visited Portland and South Portland for campaign rallies.

And now President Trump, who campaigned in Maine multiple times in 2016, winning one electoral vote, and now hoping to do it again. He was in Guilford on Friday.

You can watch his full speech at Puritan Medical Supplies here:

A previous version of the story mistakenly mixed up William Henry Harrison and Benjamin Harrison. It has been updated to reflect the correction.

RELATED: Trump: 'She's like a dictator' Talks shift to Mills and reopening Maine amid roundtable in Bangor

RELATED: President Trump's visit to Guilford may be the biggest day in the small town's history

RELATED: Mills: 'I again ask the President to check his inflammatory rhetoric at the door and abandon the divisive language'