Biden also announced that 150 million doses of COVID-19 vaccine have been shot into arms since his inauguration on Jan. 20. 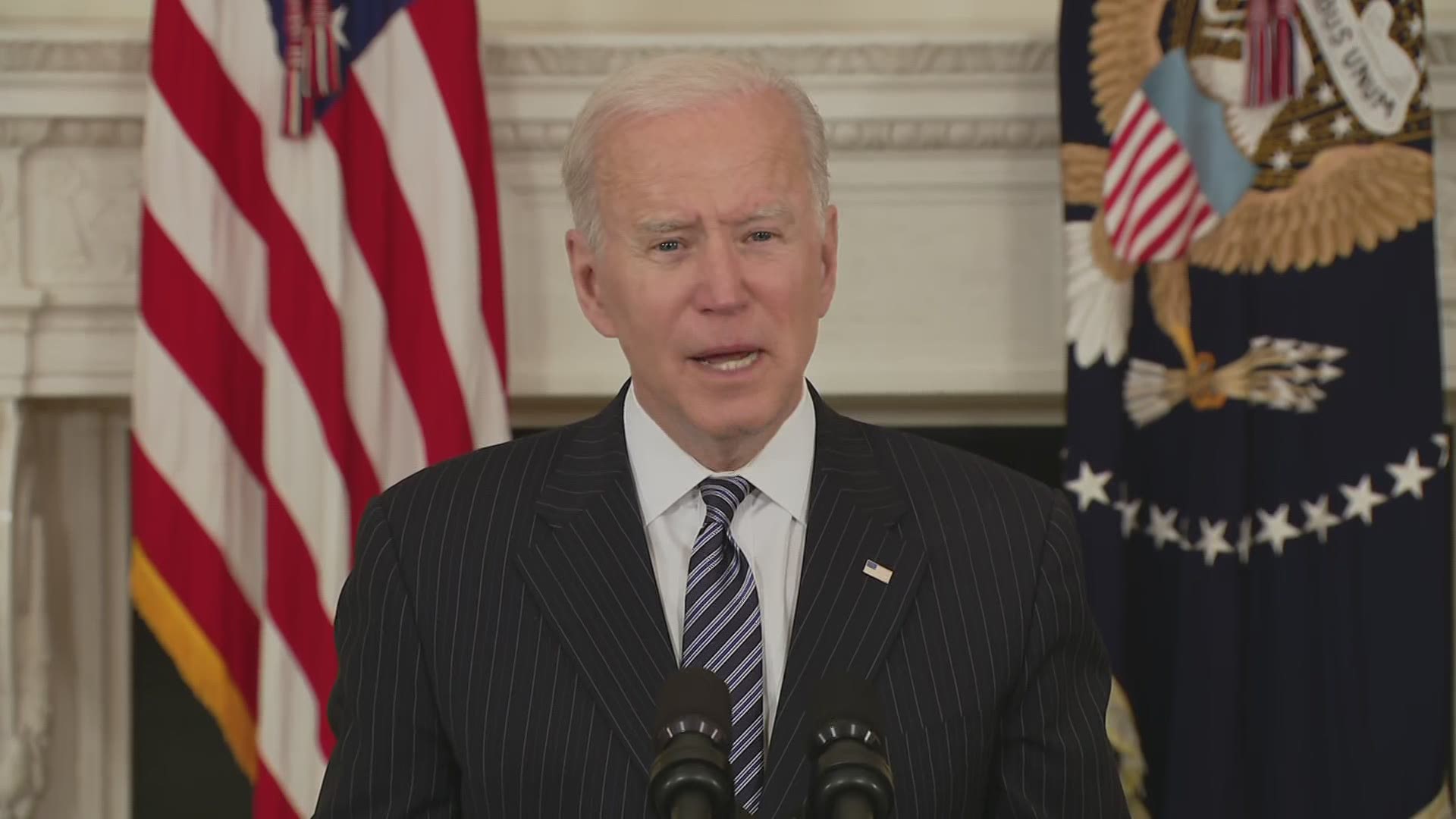 WASHINGTON — President Joe Biden announced Tuesday that he's bumping up his deadline for states to make all adults in the U.S. eligible for coronavirus vaccines.

With states gradually expanding eligibility beyond such priority groups as older people and essential, front-line workers, the president will announce that every adult will be eligible by April 19 to sign up and get in a virtual line to be vaccinated, said White House press secretary Jen Psaki.

Biden was making the announcement at the White House later Tuesday after a visit to a COVID-19 vaccination site at Immanuel Chapel at Virginia Theological Seminary in Alexandria. He thanked everyone for administering the shots and for showing up to receive them.

“That’s the way to beat this,” Biden said. “Get the vaccination when you can.”

The president also said no one should fear mutations of the coronavirus that are showing up in the U.S. after being discovered in other countries. He acknowledged that the new strains are more virulent and more dangerous, but said “the vaccines work on all of them.”

Psaki said the Biden's announcement will make things clearer for the public.

“It reduces confusion and it ensures that Americans who are not yet vaccinated, who are looking to get vaccinated, they know they are all eligible, all adults, I should say, on April 19,” she said.

Biden is also expected to announce that 150 million doses of COVID-19 vaccine have been shot into arms since his inauguration on Jan. 20. That puts the president well on track to meet his new goal of 200 million shots administered by his 100th day in office on April 30.

Biden's original goal had been 100 million shots by the end of his first 100 days, but that number was reached in March.

The announcement about vaccine eligibility is somewhat symbolic and comes as states already had begun moving up their deadlines from the original May 1 goal. It also comes as a flood of vaccine supply is being sent to states this week.

Jeff Zients, the White House coronavirus coordinator, told governors Tuesday during a weekly conference call that more than 28 million doses of COVID-19 vaccines will be delivered to states this week, Psaki announced at her daily briefing.

That allocation brings the total amount of vaccine distributed over the past three weeks to more than 90 million doses, Psaki said.

Credit: AP
FILE - In this March 25, 2021, file photo President Joe Biden speaks during a news conference in the East Room of the White House in Washington. (AP Photo/Evan Vucci, File)

At least a dozen states opened eligibility to anyone 16 and older on Monday alone, while New Jersey and Oregon announced this week that all residents 16 and older will become eligible on April 19.

The president had announced just last week that 90% of adults would be eligible for one of three approved COVID-19 vaccines by April 19, in addition to having a vaccination site within 5 miles of their home.

But eligibility isn't the same as actually being vaccinated. Being eligible means people can sign up to reserve their place in a virtual line until they can schedule an appointment.

“That doesn't mean they will get it that day,” Psaki said, speaking of a vaccine shot. “It means they can join the line that day if they have not already done that beforehand.”

Seniors still waiting to be vaccinated should seek appointments quickly “because the lines are going to become longer" after April 19, Psaki said. "There are going to be more people waiting.”