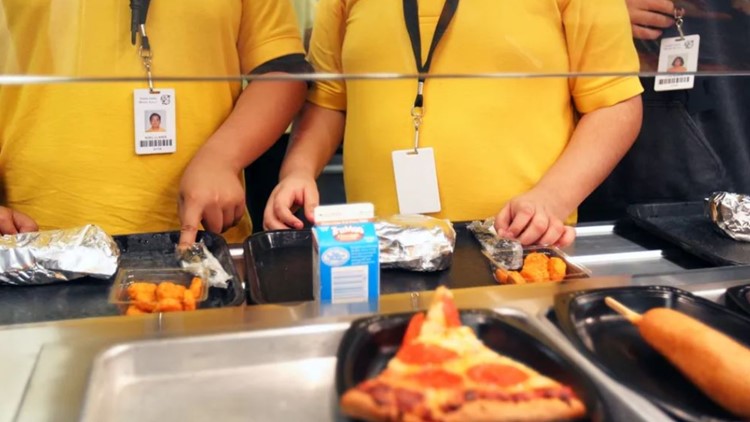 AUSTIN, Texas — After pleas from Texas school superintendents and lawmakers, the U.S. Department of Agriculture on Wednesday granted school districts more flexibility on how and what they feed students in free and reduced-price meals while schools are temporarily closed statewide due to the new coronavirus.

The Texas Department of Agriculture, which administers the federally funded school meal programs, had already received a federal waiver allowing school districts to hand out curbside breakfasts and lunches to parents who show up. But until Wednesday night, the law required parents to bring their children with them to prove they qualify for school meals — which educators and lawmakers argue contradicts public health recommendations during the crisis.

"This is ridiculous to expect somebody to put all their kids in a car and bring them up here and possibly expose them to the virus," said Troy Parton, superintendent at Munday Consolidated Independent School District in the Texas Panhandle.

State Rep. Drew Springer, R-Muenster, who chairs the House Agriculture and Livestock Committee, co-signed a letter this week asking the TDA and U.S. Department of Agriculture to give school districts more flexibility on that requirement.

"That could spell trouble if a child is sick with COVID-19 and unable to show up," the lawmakers wrote in the letter. "And in rural districts, some families rely on lengthy bus rides to get to the nearest school, which may also prove to be infeasible for working families when the school buses aren't running anymore."

The letter also asks officials to loosen nutrition guidelines as many school districts struggle to get shipments of food staples in bulk.

The TDA applied for and received federal waivers allowing school districts flexibility on both restrictions this week. Texas school districts will be reimbursed for free or reduced-price meals given to parents even if children are not present, as long as the TDA comes up with a plan to ensure the food is going to the right recipients.

"It's legally complicated because you need to make sure that a child is actually receiving that meal. These are child nutrition programs and so we give them to children," said Angela Olige, TDA's assistant commissioner of food and nutrition.

In a recent letter to school superintendents, the TDA acknowledged the challenge districts face if they are unable to serve meals to parents without children in tow. "USDA is aware of this national issue and is exploring ways to provide additional meal delivery flexibilities," the letter reads. "However, USDA has conveyed that meal service via a Grab-n-Go delivery methodology is very problematic when children are not present."

Agriculture Commissioner Sid Miller, who oversees the TDA, said that under normal conditions, the rule would prevent people from "cheating the system" and taking food even if they don't have children. But now, "you got a parent walking several blocks to the feeding center ... taking four kids with them to get their breakfast and their lunch and then walking back. Well, this is a pandemic. We don't need kids walking up the street."

Parton said Munday CISD staff members have been handing out meals to parents who don't come with their kids, risking the loss of funding if those meals are not federally reimbursed. He and his staff recognize all the parents in the 360-student school district, where more than 60% of students are economically disadvantaged.

On Monday, the first day the district began handing out meals after spring break, it gave out 91 breakfasts and 140 lunches. The next day, those numbers ballooned to 140 breakfasts and 220 lunches. "I have a feeling those are going to continue to increase," Parton said.

Urban school superintendents have also been asking for some flexibility. Northside ISD Superintendent Brian Woods said he has been giving parents the number of meals they say they need, even if the district won't be reimbursed for all of them. "You're essentially putting your local budget on the hook," he said.

RELATED: These states have issued stay-at-home orders. What does that mean?