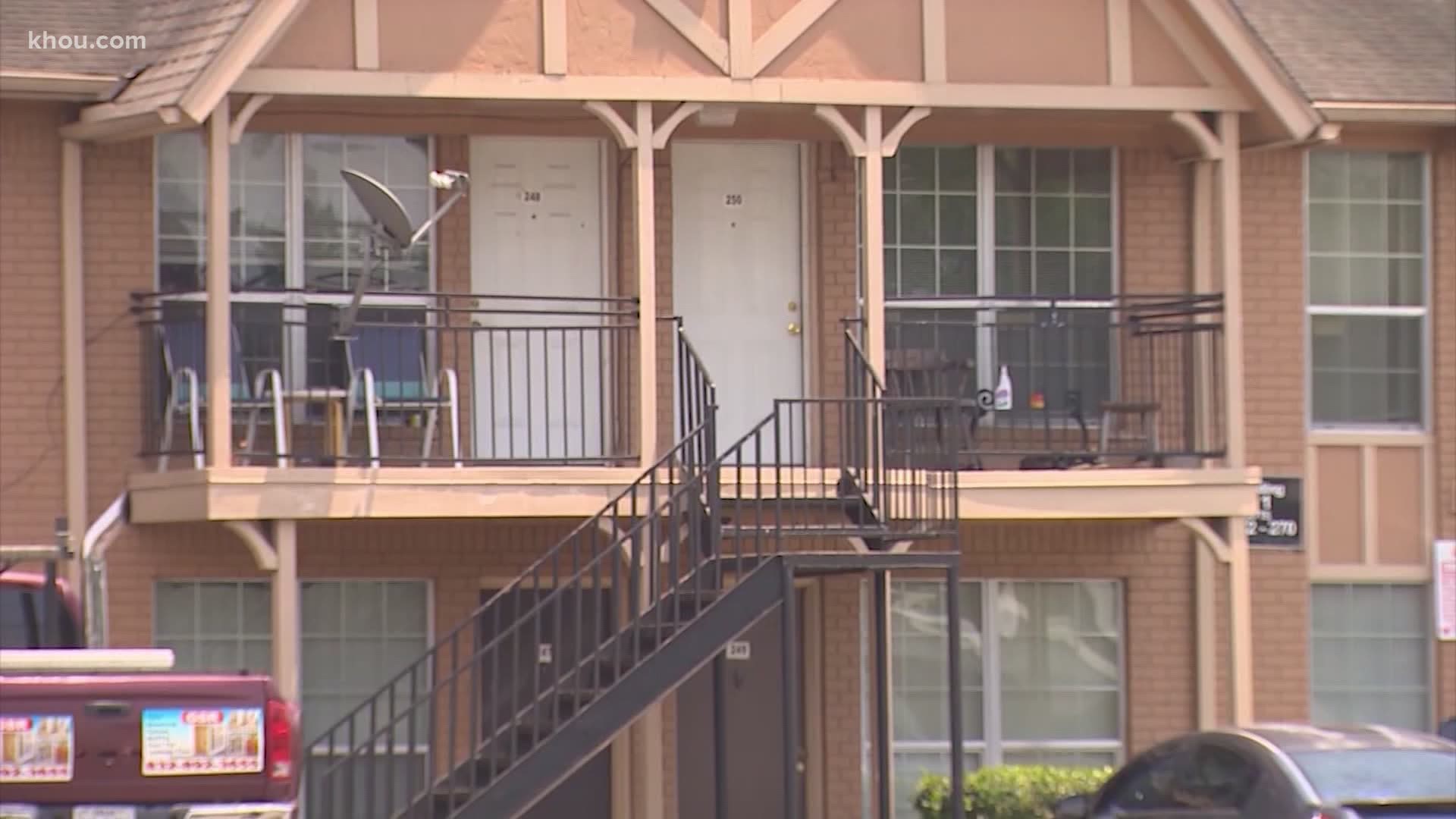 HOUSTON — Evictions and debt collection proceedings can resume in Texas next week, the Texas Supreme Court has ordered, after the court temporarily put both on hold during the coronavirus pandemic.

Eviction hearings can be held as soon as Tuesday, with orders authorizing evictions allowed starting May 26. That does not apply to certain tenants who are protected through the federal Coronavirus Aid, Relief and Economic Security Act, including renters in homes covered by federally backed mortgages. Tenants covered under that federal moratorium have protections through Aug. 23. Others may be protected through local orders, like those in place in Austin, Dallas and San Marcos.

The state’s highest civil court had put holds on both as Texans contend with the financial toll of the novel coronavirus, which has sent the state's economy toward a recession. More than 1.9 million people have filed unemployment claims with the state in the past two months.

RELATED: All funds for Houston rental assistance program are already gone and site is now closed

Advocates had warned about what might happen when the moratoriums lifted, with some predicting a surge in evictions. Although some Texas cities are offering rental assistance programs, local programs have not met the demand, and there is no equivalent on the state level.

Across Houston people are struggling because of coronavirus and many are facing a tough road ahead.

Pastor Matthew Russell with Chapelwood United Methodist Church has seen firsthand how people are afraid of losing the roofs over their heads.

“Desperation is growing to a degree that we’re deeply concerned about being homeless in the coming weeks,” Russell said.

“It’s still a process to get court up and running again, reissue notices to the parties in the case, get trials running again with the proper procedures and so this is not something that’s going to happen in a hurry,” Boriack said.

Even with that, Boriack said property owners don’t want to evict anyone. He said evictions are a last resort.

“If residents will be communicative ahead of time with their managers and property owners, nine times out of 10, those propriety owners are going to want to work out a mutually agreeable solution to keep those people in their homes as along a possible,” Boriack said.

The Metropolitan Organization is calling on local and state leaders to extend the moratorium.

Boriack said the halt on evictions calm people’s nerves but the order is only delaying the inevitable.

“When you have an eviction moratorium it doesn’t make rent not due. Rent is still due. We still have to maintain properties and pay taxes and maintain our staff so we can keep the properties up-to-date," he said. 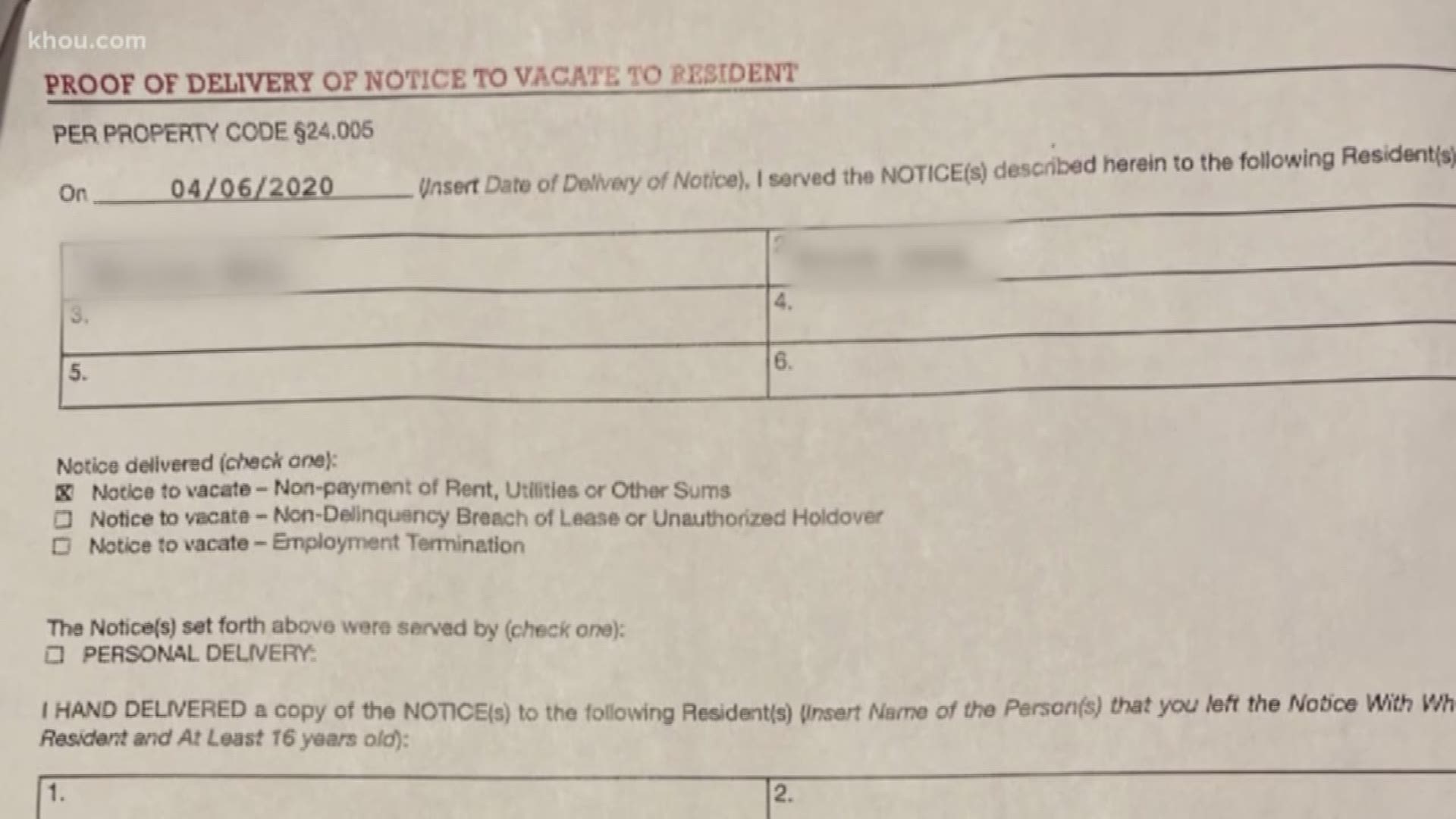 “In a time of crisis, to have your bank account frozen is a calamity,” said Ann Baddour, director of the fair financial services project for the nonprofit group Texas Appleseed.

Christina Rosales, deputy director of the advocacy organization Texas Housers, said she is concerned for the housing safety of low-income Texans and fears a rise in homelessness.

“Experts are saying there is no visible end in sight for the COVID-19 crisis. The path ahead is unclear, and for people struggling to make the rent, being subject to an eviction could be jarring,” Rosales said. “Not only that, but the effects of evictions have further downstream effects on all of us. Tenants will have their lives upended as a result of evictions, landlords may have an increase in empty units they can't fill and cities will have a homelessness crisis on their hands.”

Rosales added, though, that there is a silver lining in the Supreme Court’s order. Units and buildings that have federally backed mortgages are still protected from evictions through the CARES Act, and the new order requires landlords to state whether their properties are subject to this protection.

RELATED: Texas landlord jailed and sued after cutting grandmother's utilities when she was short on rent

Heather Way, who directs the Entrepreneurship and Community Development Clinic at the University of Texas Law School, said the end of the high court’s eviction moratorium may lead to a patchwork of enforcement across the state. Some cities and counties have put a hold on evictions during the pandemic. In some places, she said, justices of the peace may choose not to proceed with eviction hearings even now; the Supreme Court order says they “may resume,” but does not require it.

David Mintz, vice president of government affairs for the Texas Apartment Association, did not immediately return a request for comment.

“I’ve already had one veteran calling me in tears, unable to pay because of loss of income due to COVID-19,” said William Ritter, staff attorney with the Veterans Legal Assistance Program of the Texas Legal Services Center. “The property manager said that he was going to be the first one in line at the court on May 19. So I expect to see a lot more of that.”

RELATED: How to get help if you're behind on rent in Houston

For Ritter, the end of the moratorium is coming too early.

“People that have been unemployed are taking weeks to get their payment. Stimulus checks are also taking weeks. More time is needed for folks that are trying to save their homes,” he said.

Disclosure: Texas Appleseed and the University of Texas at Austin have been financial supporters of The Texas Tribune, a nonprofit, nonpartisan news organization that is funded in part by donations from members, foundations and corporate sponsors. Financial supporters play no role in the Tribune's journalism. Find a complete list of them here.

This story was originally published at TexasTribune.org. The Texas Tribune is a nonprofit, nonpartisan media organization that informs Texans — and engages with them — about public policy, politics, government and statewide issues.