Northside ISD: School year to start with distance learning for all

Northside Independent School District said there will be no in-person instruction until at least Tuesday, September 8, the day after Labor Day. 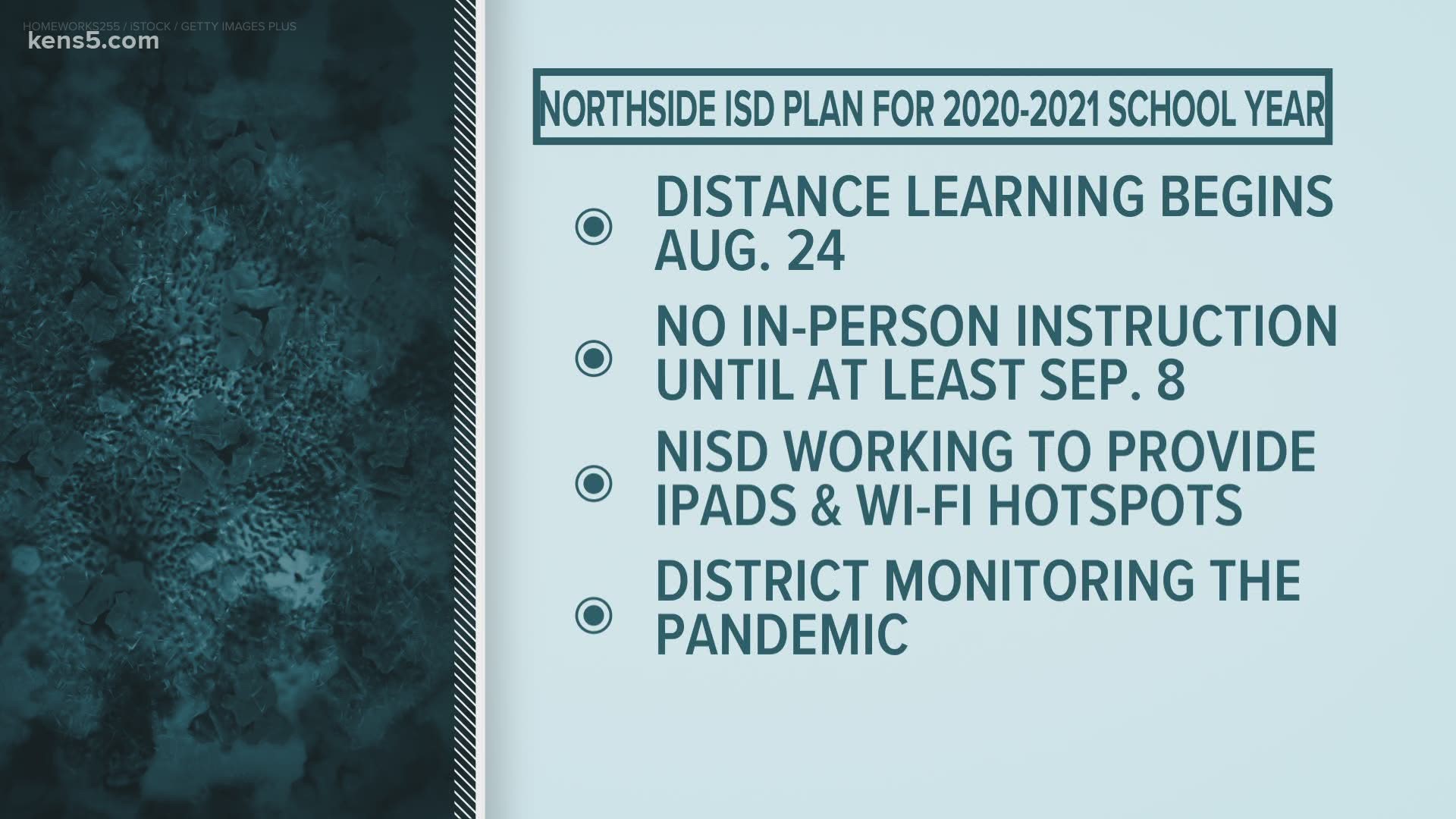 SAN ANTONIO — Northside Independent School District announced Thursday it will start the school year with distance learning - until the day after Labor Day.

The first day of school is set for Monday, August 24. NISD Superintendent, Dr. Brian Woods, and the district's Board of Trustees announced the decision Thursday - saying there will be no in-person instruction until at least the Tuesday after Labor Day, which is September 8.

"After weeks of listening to teachers, parents and school leaders we have made the decision to begin the year in distance learning," Woods said. "Our plan meets TEA guidelines released last week, though we remain hopeful that the state will allow local school districts to make decisions based on the health conditions in their own communities. We will continue to develop protocols for a return to school buildings and in-person instruction as soon as it is safe to do so. We know that in-person instruction is the best environment for most students and we will continue to work to provide that safely.”

In a news release, the district said it continues to monitor local conditions, work with city and state leaders, and follow guidance from local, state and federal health officials.

Students who need access to technology devices for remote learning - such as iPads, Chromebooks and Wi-Fi hotspots - can rely on the district as they did in the spring when the pandemic caused schools to stop in-person instruction.

NISD said its staff has been working on distance learning protocols for months now and believes that this offering will be "rigorous and engaging."

Nutritional support to families with meal distributions will also continue.

The development comes after Northside ISD Student Rylee Lippenholz started a petition on change.org to keep students and teachers in the district from returning to an in-person learning setting until it is safe. She says she didn’t want teachers and staff like her mother, a librarian at Brandeis High School, to be forced into a dangerous situation.

“I have a little brother who just got out of chest surgery, I have high-risk grandparents,” Lippenholz said. “The fact that teachers have to go back to school is scary because their families are in danger just as much as they are.”

The petition had collected more than 5,000 signatures before NISD announced their plans Thursday afternoon.

“It’s definitely really encouraging that that many people are in support of keeping our teachers and students and staff protected,” Lippenholz said.

For more details, check NISD's Back to School section of its website.

RELATED: Back to school? The options SA area districts are offering for the upcoming school year

RELATED: Comal ISD sticking to their calendar for next year despite new guidance from TEA