The state has reported 771,780 COVID-19 cases since the pandemic began. 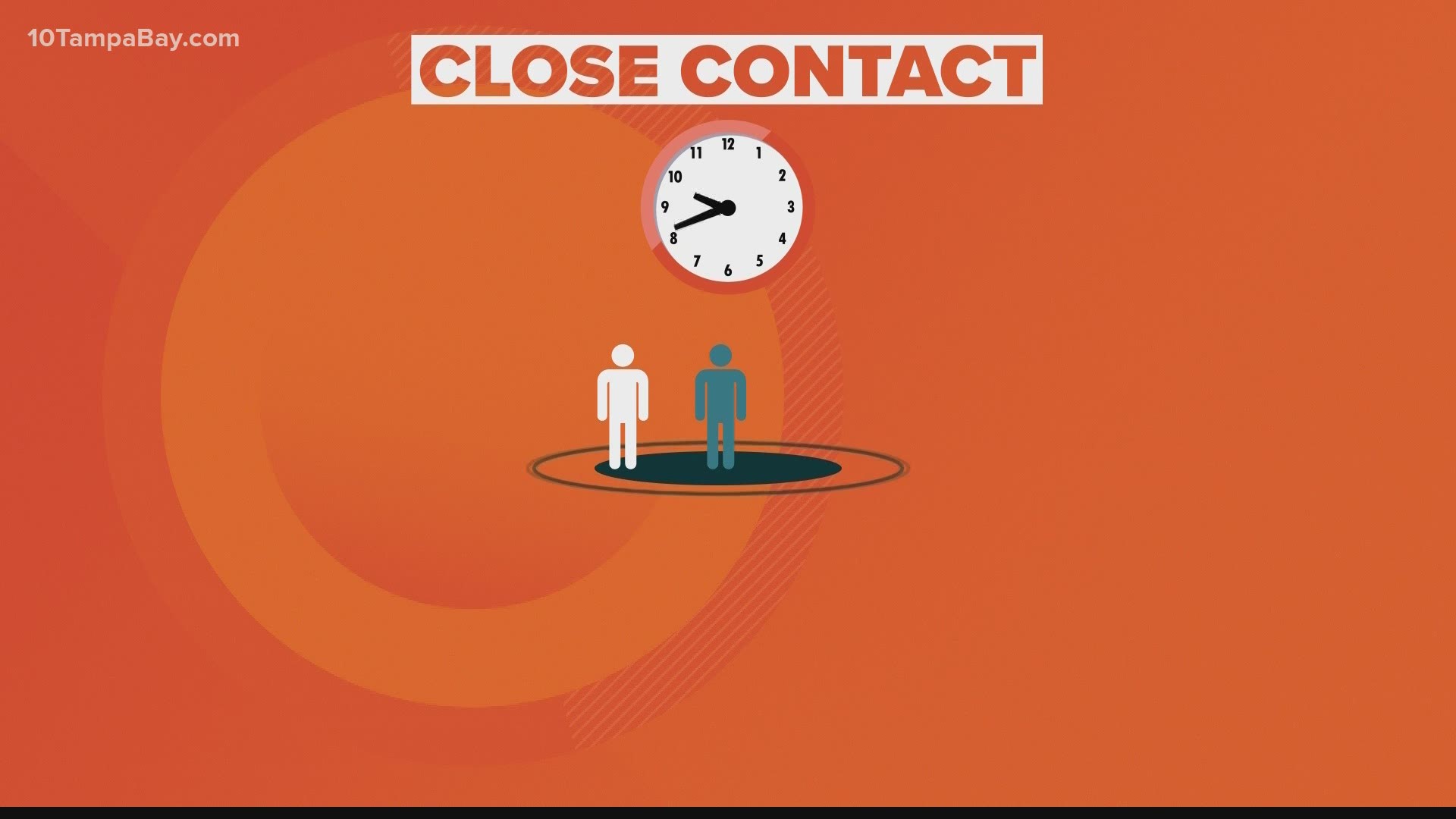 ST. PETERSBURG, Fla. — Florida's percent positivity rate continues to hover near and even below 5 percent, an improvement from earlier in the pandemic.

However, the state is continuing to see recent spikes in deaths that experts predicted would follow an earlier uptick in cases.

The Florida Department of Health receives lab test results each day. On Friday, it reported 6,689 new COVID-19 cases for Oct. 22, pushing the state's overall total to 771,780 cases since the pandemic began.

Last week, for the first time since the pandemic began, the state did not release a report because of a technical error, first reported as a data dump error. The health department said it found the error was due to a technical issue and the lab was not at fault.

A similar data dump happened in the beginning of September. On Sept. 1, the state said a recent backlog of test results from Quest Diagnostics made Aug. 31's number of cases higher. The nearly 75,000 test results from the lab were at least two weeks old, with some dating back to April. You can read about how those tests impact the state's numbers here.

In July, the state did not report a new daily total below 6,000. Some good news, however: since July 25, reported coronavirus cases for the state remained under 10,000.

Still, the coronavirus situation in Florida has made national headlines and forced the state to suspend drinking at bars to combat the spread of the virus. At least two bars have had their alcohol licenses suspended for violating state guidelines.

However, as of Sept. 14, bars across the state have been allowed to reopen at 50 percent capacity. Only bars in Miami-Dade and Broward counties must remain closed for the time being.

On Sept. 25, Gov. DeSantis announced the state would be transitioning into Phase Three of reopening. The governor says he will sign an order that guarantees restaurants the right to operate and lifts state-level capacity restrictions on them. You can read more about what that means here.

Still, many cities and counties in the state continue to implement mask mandates in an effort to curb the spread of coronavirus. Here's a breakdown of where you have to wear one around Tampa Bay.

Back in mid-June, the state began battling a new outbreak since Phase Two of reopening began on June 5, with one study at the time even saying it could become the next epicenter of the coronavirus pandemic.

New cases aside, how are we truly doing in Florida?

Dr. Anthony Fauci of the White House Coronavirus Task Force and the director of the National Institute of Allergy and Infectious Diseases said in March there’s a pattern this virus follows: a rise in new cases first, then hospitalizations, followed by a bump in ICU visits and then, weeks later, we could experience a climb in deaths.

So, let’s see how our state is doing in each of those steps.

Florida is testing more people now than when the pandemic began.

Some days, like weekend days, however, are seeing drops in the number of people being tested.

Thursday's report showed 100,179 tests were returned from labs on Oct. 22, with 4 percent being positive for coronavirus.

According to the Department of Health, the percent positivity was 7.88 percent on Oct. 9 and 3.47 percent Oct. 10, but those numbers are best presented using the two-day average because of the data error.

It's important to note that the percent positivity rate doesn't tell the whole story. It's just one metric. Here's Dr. Jill Roberts with the USF College of Public Health explaining how to process that data.

Still, it's one data point that can help us understand the bigger picture.

Essentially, out of every 100 people tested recently in Florida, about 5-6 were infected, based on the latest day's test results.

If you consider our 14-day moving average, as pictured in the chart below, the percentage of people testing positive has been declining steadily after climbing rapidly last month.

RELATED: Florida coronavirus: How to search for COVID-19 cases by county and zip code

By the way, the World Health Organization has recommended a state consistently test at a positive rate of 5 percent or lower for a 14-day span to continue reopening.

That didn't happen in June when the state moved to the next phase of reopening. In all of July, the state did not report a positivity rate that wasn't at least double what the WHO recommends for reopening. Since Aug. 12, the state hasn't seen a percent positive rate higher than 10 percent.

As mentioned earlier, it dipped below 5 percent on Aug. 21 for the first time since mid-June. And, it then dipped back below again on Aug. 28. Most recently, the state dipped below 4 percent on Oct. 3, the lowest since early June.

We should note that if you look at the state's dashboard for new coronavirus cases, some of the numbers look different than ours – at least for daily new cases. That's because the state is only tracking Florida residents, not total cases in Florida, on its dashboard. It only tracks the latter within its daily report. And, the chart on the state's website is regularly being revised to say a case happened on one day instead of another.

For consistency, we've decided to track the total cases reported each day. Those totals don't change, so it's our most consistent way of measuring trends, even if the state moves data around on its dashboard. For transparency's sake, here's a direct link to the state's data if you'd like to examine Florida's numbers for yourself.

New cases have dropped significantly in recent months, but what about hospitalizations?

Tracking hospitalizations got easier on July 10 when the Agency for Health Care Administration began publishing a spreadsheet with the number of people currently checked-in for coronavirus-related complications in Florida. The data only includes people whose "primary diagnosis" was COVID-19.

As of Oct. 23, 2,120 people were hospitalized with COVID-19 as their primary diagnosis statewide, and 522 of them were in the Tampa Bay area. Those numbers are frequently updated, and you can click here for the most recent data, which is also broken down by county.

Since the pandemic began, the state confirms a total of 47,953 residents were hospitalized at some point during their illness.

Overall in Florida, 16,544 people have died after being infected with the coronavirus. If you're wondering why that's different from the state's dashboard, it's because Florida doesn't count the 204 non-resident deaths that have been reported in the state on its dashboard. It only does so within the official daily report. We've combined those numbers together to provide one total.

The state lists deaths on its dashboard by the date of death, not the day it’s reported, so the dashboard is constantly in flux. Our graph below is based on the day the state confirmed deaths to offer a different perspective.

For example, the Florida Department of Health reported 48 new resident deaths when we checked on Friday, but the dashboard for Thursday, Oct. 22 (when that data would have been gathered) only lists three.

However, the state recently added a section to its daily report (on page 5) that shows deaths by date of death. This data has been reported daily on Florida's COVID-19 dashboard.

The graph for deaths by date of death is subject to change, though, because the information reported to the state can be delayed up to two weeks. So, for consistency, our charts have stuck to new deaths added by the date they were added. For transparency, you can always reference the state's data here.

Data compiled based on state information and The COVID Tracking Project suggest our daily deaths had remained relatively consistent – from a trend standpoint – until about early July, at which time we began to see a noticeable climb in newly-reported deaths. The 14-day moving average has since begun to decline again.

Florida on Aug. 11 again broke its own record for new deaths in a single day's report. Counting Floridians and non-residents, 277 is the highest number of new deaths reported by the state in a day.

Recently, Florida confirmed its youngest COVID-19-related death since the pandemic began – a 6-year-old from Hillsborough County.

For transparency: Here's our chart. Here's the state's.

One of the most common questions we get asked is: How many people have recovered from COVID-19 in Florida?

The truth is, it's hard to say.

Two of our reporters, Angelina Salcedo and Josh Sidorowicz, have tried to get answers for you. But, they've run into challenges.

First, there's no clear definition of what constitutes recovery, which makes it hard to track.

"It can be that they're symptom-free, but they may still be shedding virus and so they still need to be isolated. There are people who we don't know what the recovery period is, so recovery can mean many things. It's not defined clearly," said Dr. Janice Zgibor with the University of South Florida Public Health.

While some states report recoveries, Florida does not.

"I think it's difficult to record who is recovered because of all of the definitions of recovered. Also, logistically, you would have to follow every positive case to determine when they've met either the time criteria or the symptom criteria," Zgibor said.

You may have seen recovery numbers from Johns Hopkins University, but those are actually just estimates. The U.S. doesn't have a uniform way of reporting recoveries. That's partly because resources need to stay focused on contact tracing and testing.

Even Johns Hopkins says its numbers shouldn't be taken at face value.

“Recovered cases outside China are estimates based on local media reports," Douglas Donovan, a spokesman at John Hopkins, told 10 Tampa Bay in April. "And may be substantially lower than the true number.”

The state-by-state patchwork of reporting recoveries -- with some doing so and some not -- makes it even harder for Johns Hopkins to estimate the numbers.

10 Tampa Bay has repeatedly reached out to the Florida Department of Health since the outbreak started to try and get recovery numbers.

We've received a similar response each time. The health department says they're working on a way to get that data.

Many of you ask us to not just report the NEW #coronavirus cases @HealthyFla reports each day, but the RECOVERIES as well. Here's why that's hard ⬇️ We have asked the State for months - This is the word for word response we get each time. We're still pushing for more @10TampaBay pic.twitter.com/5yiQK1Fcwk

The hope is that with hospitals better equipped to handle the pandemic, an abundance of available ventilators and an advancement in medicine, deaths can be prevented.

The age of those testing positive could play a factor in minimizing lives lost, as well.

RELATED: Here's where you can get a COVID-19 test around Tampa Bay

RELATED: As millions are tested, some are finding it difficult to get a COVID test done