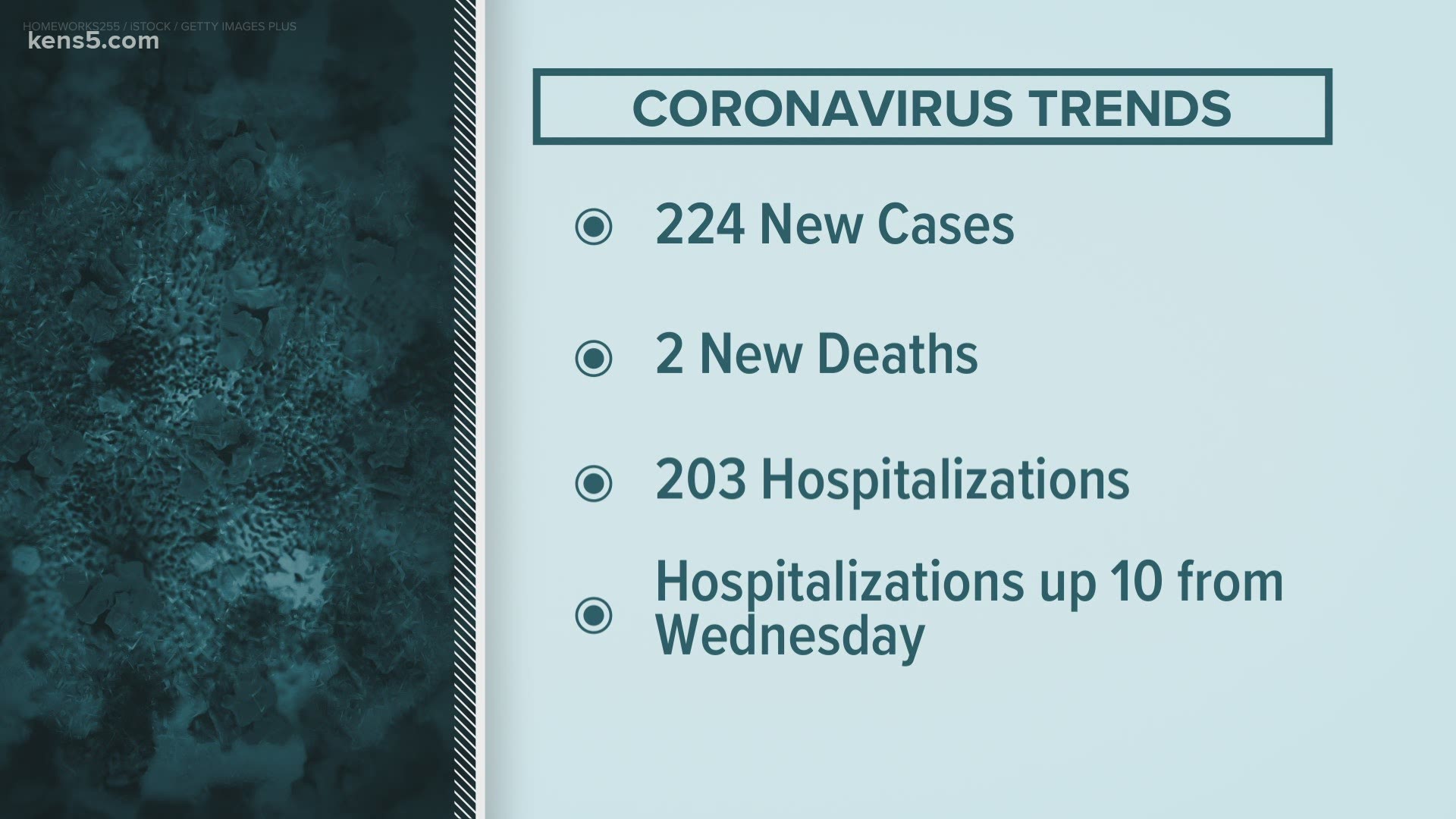 (The Texas Tribune) — Hospitals in some parts of the state are filling with coronavirus patients, alarming health officials who say Texas could be on the brink of another surge after a relative plateau in September.

The number of hospitalized coronavirus patients has swung upward in parts of the state including West Texas, the Dallas-Fort Worth area, the Panhandle and El Paso, where hospitalizations have reached an all-time high and the mayor warned of an “unprecedented number of new cases.”

Dallas County Judge Clay Jenkins this week upped the area’s coronavirus threat level to red — the highest risk — as more patients are being admitted to hospitals with COVID-19 and as infections have climbed, including among school-aged children.

Editor's note: the video in this story is from KENS in San Antonio and reports on another anticipated surge of COVID cases in an Oct. 15th broadcast

“Unfortunately, we are currently going in the wrong direction,” Jenkins said.

Experts blame social events like birthday parties and game day gatherings for the recent upticks, and they say there is widespread fatigue for following stringent guidelines to wear masks, practice social distancing and avoid crowded indoor spaces. The director of the Centers for Disease Control and Prevention cited small family gatherings as an “increasing threat” this week.

A wave of infections and hospitalizations swept Texas this summer, overwhelming hospitals along the U.S.-Mexico border. Officials worry another flare-up could loom just as Texans prepare to celebrate the holidays.

On April 6, the state started reporting the number of patients with positive tests who are hospitalized. The average number of hospitalizations reported over the past seven days shows how the situation has changed over time by deemphasizing daily swings.

Note: From July 23 to July 28, between 9% and 18% of hospitals reported incomplete hospitalization numbers due to changes in reporting to meet federal requirements.

“We don’t have any identified hot spots or large outbreaks. We just have lots and lots of community transmission,” said Casie Stoughton, director of Amarillo Public Health, which also upgraded its local threat level to red this week.

There were at least 4,263 COVID-19 patients in Texas hospitals Thursday, according to the Department of State Health Services, which is still far short of the more than 10,000 Texans who were hospitalized for the virus in July.

As Texans enter the eighth month since cases first appeared in the state, Republican Gov. Greg Abbott has allowed areas where less than 15% of hospitalized patients have the coronavirus to reopen bars at half their capacity, if local officials allow it, and to have more patrons in establishments like amusement parks and movie theaters.

So far, major counties like Dallas, Harris and Travis have been reluctant to loosen restrictions meant to tamp down the spread of a virus that has claimed more than 16,800 lives in Texas and sent unemployment claims skyrocketing.

McLennan County Judge Scott Felton allowed bars to reopen this week over the advice of the local health authority, who said the area remained a “hot spot” and that a bar is “the worst situation imaginable” when considering transmission.

Not all parts of the state are seeing an increase in hospitalized coronavirus patients. The most recent upticks are generally concentrated in regions that avoided the worst of the pandemic this summer.

“Places that had not gone through their big summer wave are now experiencing waves. That’s one pattern we’re seeing,” said Dr. Luis Ostrosky, a professor of infectious disease with McGovern Medical School at UTHealth and Memorial Hermann-Texas Medical Center.

One reason is “pandemic fatigue,” leading fewer people to wear masks or practice social distancing, he said. “They’re not seeing people get sick around them, and they’re just starting to be a little bit more permissive,” Ostrosky said.

Lubbock has more COVID-19 hospitalizations than it’s ever had, and at least one hospital is full. North-central Texas has seen coronavirus hospitalizations increase by about 30% since September, said Stephen Love, president of the Dallas-Fort Worth Hospital Council.

When Dr. Robert Hancock, president of the Texas College of Emergency Physicians, recently tried to transfer a patient out of an Oklahoma hospital for specialized care, he could not find a facility in North Texas that had an open ICU bed with staff to support it. The patient ultimately had to stay at the Oklahoma hospital with doctors and nurses left to “do the best we can,” said Hancock, an emergency room physician practicing in Oklahoma, Amarillo and in the Dallas-Fort Worth region.

While hospitals might have open beds or be able to quickly double their intensive care unit capacity, he is concerned they may not have the staff needed to contend with a surge.

Many of the hospitalized patients are older and sicker, and are potentially being inadvertently infected by younger family members who have resumed school or social activities, according to health officials and doctors.

Hancock, for example, said he “put a lady on a vent the other night that hadn’t left her house since [the pandemic] started.”

“I honestly expect it to get a lot worse,” he said.

In Lubbock — home to Texas Tech University and Lubbock Christian University — health officials say the increase in hospitalizations of mostly older residents has lagged a few weeks behind when they saw an uptick in infections among teenagers and young adults.

That mirrors what happened earlier this summer, when there was a spike in cases associated with bars reopening, said Katherine Wells, the city’s director of public health.

She worries about the climbing infections and hospitalizations going into flu season — which could further strain hospitals — and how they could limit the ability of Lubbock hospitals to act as a “regional hub” for patients in “tiny community hospitals” between Albuquerque and Dallas that need specialized or more advanced care.

Dr. Ron Cook, the city of Lubbock’s health authority and a professor at Texas Tech University Health Sciences Center, said “people are tired of being cooped up” and less fearful of the virus than they might have been in its early months. There’s been an increasingly “lackadaisical” approach to safety precautions, there are people who refuse to wear masks and he thinks some assume “we’re three-fourths of the way over this” because businesses can open at 75% capacity. Health experts say wearing a mask can help prevent the spread of the virus.

“Not to have a ‘Game of Thrones’ theme, but winter is coming,” he said, evoking a well-known line from the television show. “I'm concerned about that because it pushes people indoors and then our spread is worse.”

Compared with the spring, more health workers have been sickened by the virus, Cook said.

Two hours north, in Amarillo, representatives from the city’s two major hospitals told officials this week that their facilities were “stressed” by a high rate of viral spread in the community.

The Northwest Texas Healthcare System had 50 employees quarantined Wednesday because they had contracted the virus or had likely exposure, said Dr. Brian Weis, the hospital’s chief medical officer.

“Every morning this week, we have had patients waiting in our emergency room for a bed, meaning that we do not have the immediate capacity to get them into an inpatient bed,” Weis told city leaders this week.

“Our folks are less at risk of getting COVID-19 in the hospital than they are in the community at this point,” Lamanteer said. Nearly 30% of his hospital’s patients were admitted with COVID-19, he said.

Disclosure: The Texas College of Emergency Physicians and Texas Tech University have been financial supporters of The Texas Tribune, a nonprofit, nonpartisan news organization that is funded in part by donations from members, foundations and corporate sponsors. Financial supporters play no role in the Tribune's journalism. Find a complete list of them here.

Editor's note: this story originally appeared in the Texas Tribune the morning of Oct. 16, 2020