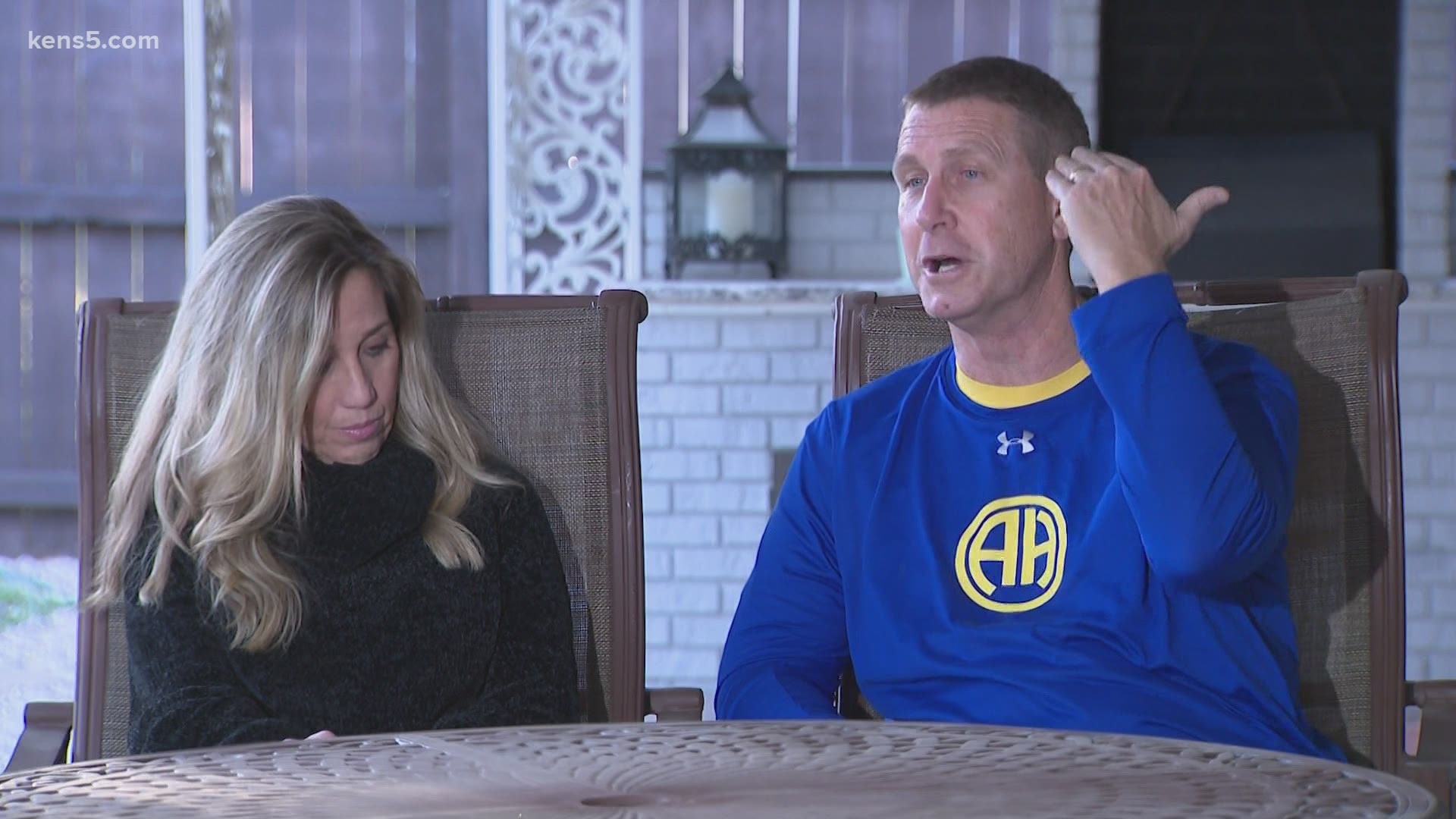 SAN ANTONIO — Alamo Heights Athletic Director and Head Football Coach Ron Rittimann coached his team's two playoff games from his living room couch, and that’s because he was recovering from COVID-19. He started to feel sick the first week of December. This week, the coach and his family reflected on that experience, and his road to recovery, health and happiness.

"I just quarantined here in the house. I didn't really have any symptoms. Everything was good," Coach Rittimann said about his first few days after testing positive.

"The following Monday morning I woke up and my oxygen level was like at 88. We went back (to Urgent Care), and the doctor did a chest x-ray. I had pneumonia in both lungs. The doctor at that point said I can't let you go home, we need to check you into the hospital."

"Especially when they said we are gonna take him by ambulance to the hospital when we were at the urgent care, and I was like, wait a second?" said Rittimann’s wife, Patti. "And then getting him there I could tell how sick he was. It was scary."

"I would the say time is when you have time to reflect on things, and to look back on your life, and to look forward to the future," he said. "I don't wanna leave too soon. I wanna take care of my wife and kids for a long time, and see my grandkids, and all those things that I've heard are so special in life. But when you get to sit there and think about that, and when you don't feel right, and you know something is wrong, it’s out of your control. Sitting there in the hospital those few nights you start thinking what if this is really it?"

Patti continued, "There were times I was sitting on the couch, and we always sit in our same little spots together, and I'd be sitting there wanting to look over and talk to him, and just think (to myself) I'm not ready. I'm not ready for this."

"The doctor that came into to talk to me the first day said coach I'm gonna take care of you from here down," Rittimann said, pointing at his neck." You're gonna be okay, but you've got to be responsible from here up."

"We lose a lot of patients because of their mindset and their attitude, so I made it a point to try and be as positive as I could through the whole time. I don't think I thought at any point it was gonna happen, but you start thinking about it, and I knew I didn't wanna check out," said an emotional Rittimann.

"You never expect it to happen to you or your immediate family, and so it definitely scared me," said the Rittimann’s daughter, Kylie. Coach continued, "The phone was huge because I got to reach out to friends and family. We FaceTimed to see and get to hear her voice, and the same with Hunter and Kylie," Rittimann said through tears.

"He's always been so strong for our family, and such a leader, and that did kind of turn during this time," said Patti. "I just thought, 'I've got to be strong for him, and not let him think it is as bad as it might be.'"

"The doctor came in and said you are ready to go home. So I called Patti, and she came and got me, and I've been home ever since," Rittimann said.

"I was so happy," Patti added.

"It gives you the perspective that you can lose anyone at any time. Just appreciate your people, and telling them you love them while you can is always a good thing," said the Rittimann’s son, Hunter.

"Physically I feel good, mentally, emotionally, the whole thing. I just feel blessed to be where I am today. Those doctors and nurses are so underappreciated at what they do. They made it tolerable. I'm not gonna say enjoyable, but they made it great," Rittimann said.

"The message is probably don't ever take anything for granted," he said. "You can be healthy one day and not the very next. You can have your family and then not be with your family probably real soon. I just don't think there are any guarantees in life. I think we need to count our blessings every day, and get excited that you wake up every morning, and have a chance to do what you do, which is life."