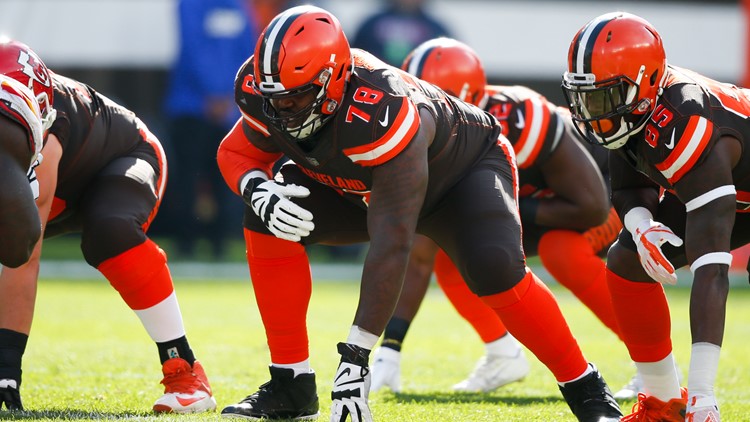 CLEVELAND — The Cleveland Browns had already gotten off to a sluggish start.

And now they'll have to play the rest of their season opener without their starting left tackle.

Browns left tackle Greg Robinson was disqualified from the team's matchup with the Tennessee Titans after receiving an unsportsmanlike conduct penalty with 5:03 remaining in the second quarter. Robinson received the penalty after kicking Titans safety Kenny Vaccaro at the end of a play in which the left tackle had been called for holding, negating a 2-yard Nick Chubb run.

Robinson's ill-advised came at an inopportune time for the Browns, who were trailing the Titans by a score of 10-6 at the time their starting left tackle was ejected from the contest.

In addition to the untimely nature of Robinson's ejection, it's worth noting that offensive tackle is one of the positions in which Cleveland's roster lacks depth. With Robinson ineligible for the remainder of the game, the Browns originally inserted Kendall Lamm into the game, before the fifth-year veteran left with a knee injury.

At halftime, the Brown trail the Titans 12-6 and have committed 10 penalties for 107 yards.

For all the latest from FirstEnergy Stadium on Sunday, follow our live blog.