Teachers hope school, state officials listen to concerns on returning to the classroom

They’re hoping thousands of their voices are heard by superintendents, school boards and state leadership -- the people shaping back-to-school plans.

HOUSTON — Teachers say they are willing to die and have died for their students in mass shootings, but some tell KHOU 11 losing their lives because they’re forced into classrooms during a pandemic, is a predictable, preventable sacrifice.

They’re hoping thousands of their voices are heard by superintendents, school boards and state leadership -- the people shaping back-to-school plans.

“If they're not hearing us, it's because they've closed their eyes and their ears,” said Stephanie, a Houston-area middle and high school teacher who asked to be identified by her first name only.

Stephanie and her partner are both teachers, and they’re parents of three kids with health issues.

Stephanie has leukemia and was recently diagnosed with autoimmune disease.

“Me entering a school building and being exposed the virus is potentially life threatening,” she said. “With COVID going on, while I might be able to make arrangements to keep my children home, if my spouse and I are expected to report to a campus, to our individual campuses, we're still exposing ourselves to whoever might be carrying the virus into the school. And then we're coming home to our children. That's not okay. That puts five lives at risk.”

Stephanie is not alone, as she found out after starting the Facebook page “Texas Teachers for Safe Reopening.”

“I expected a couple of hundred people to hop on and say, ‘Hey, yeah, this is a good thing,’” she said. “But nothing like what we’ve seen."

Texas Teachers for Safe Reopening launched July 6 and as of this week, is nearing 50,000 members.

“We're just blown away,” Stephanie said. “We are just blown away by the response that we've gotten. So I feel like we've struck a nerve, so to speak, and provided a platform that was needed.”

Among many other things, Stephanie said teachers are worried about in person classroom time.

There is no way they can deliver on the expectation of keeping children safe at school.

“Our number one priority is always the safety and security, the well-being of our children, of our students,” Stephanie said. “It’s not safe for them to be at school right now.”

Stephanie wanted to find out if others in her profession felt the same way, so she put out a survey to her Facebook group asking members to share it with their friends.

“The biggest realization that we made was that parents and educators are aligned. Almost across every category that we questioned,” she said. 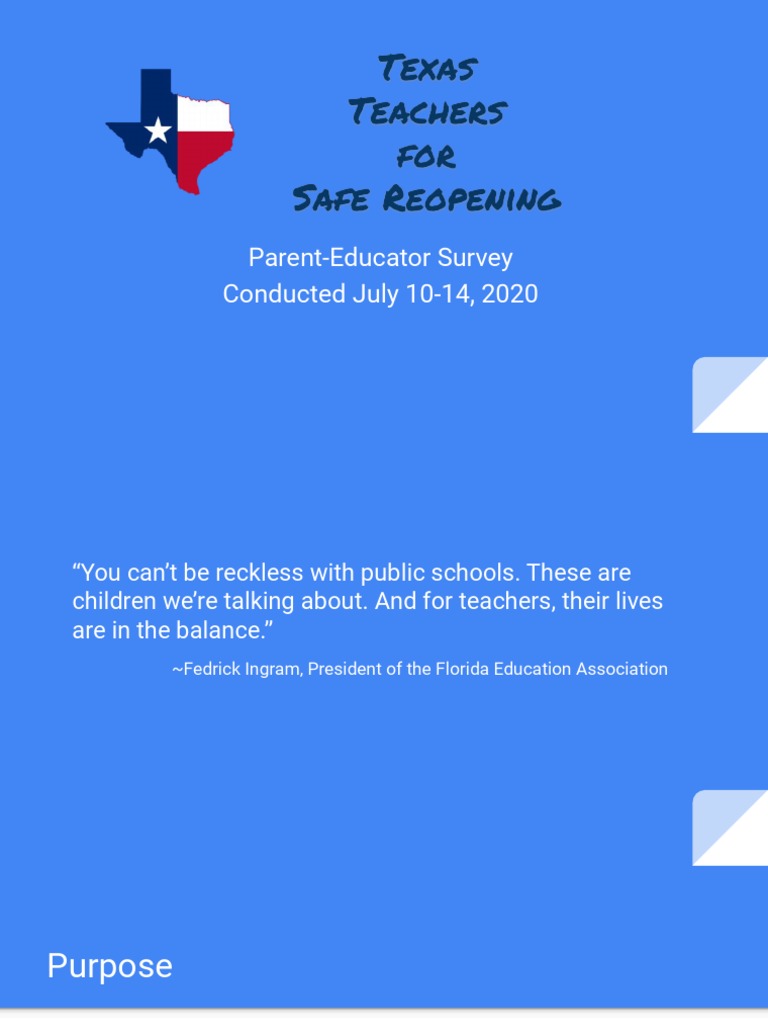 Texas Teachers for Safe Reopening survey data | Teachers | Learning
"You can't be reckless with public schools. These arechildren we're talking about. And for teachers, their livesare in the balance." ~Fedrick Ingram, President of the Florida Education AssociationPurpose The Texas Teachers for Safe Reopening conducted this survey of educationalstakeholders in an effort to inform and guide decisions made for the safereopening of PK-12 schools for children, their families, and their educators.

Stephanie said while the Facebook page is for teachers only, educators were encouraged to share the survey with their group of friends, seeking feedback from everyone involved in children’s education.

More than 38,000 people from across the state responded.

“We pulled in not only teachers, but parent educators, occupational therapists, physical therapists, speech and language pathologist, licensed specialists in school psychology, the counselors, administrators from the superintendent on down,” Stephanie said. “And we invited them to respond to the survey so that we could get a good cross-section of data.”

“We are all aligned in the fear of contracting or spreading the virus,” Stephanie said. “Additionally, being in the school building inside face to face, for to five days a week. The overwhelming majority feel like that is an unreasonable concern and they don’t see that there is a viable solution for being asked to report to the school building face to face.”

Stephanie said some districts may begin school completely online for students, but they’re still requiring teachers to report to the school building in order to provide that remote education.

“That's problematic, because if we report to campus, then we're putting ourselves at risk of spreading contracting the virus from our students or spreading the virus if we enter the environment, whether we're asymptomatic or not,” Stephanie said.

“Our leadership is as or more worried about the economy than they are the children,” said Troy Reynolds, the founder of Texans for Public Education, a non-partisan group that advocates for public education, including pushing teachers to vote. “I understand that the number one service that the legislature thinks we provide isn’t education, it’s daycare. They need people to get out and get to work. They want the kids in school. If you're going to do that. Relax the rules on the instructional minutes. Let us bring them in 15 at a time in the classroom and get those numbers down. And I think that's about the most you can minimize it.”

Reynolds said the STAAR testing this year will not provide an accurate read on kids’ abilities, considering the varying education models during the pandemic.

According to Reynolds, school districts need the ability to make decisions for themselves.

“I want local control, free me up and say, ‘Teach your kids as best as humanly possible under these circumstances.' And we would do that,” he said. “I don't believe TEA would ever relinquish that kind of control.

He said there are many issues to be figured out.

“I think they need to sit down with some classroom teachers and talk about things like they have talked about, how a hearing-impaired student (will) read lips through a mask? You know, there are a million small things that need to be addressed, and to my knowledge, this is all being dictated from Austin and it's being dictated last minute,” he said.

In emailed answers to questions asked by KHOU 11, TEA said it “has created tremendous flexibility for school systems, including a wholly new mechanism to find school systems for remote instruction.”

TEA also told KHOU 11 it expected to make many “adjustments to accountability this year.”

“During a public health crisis, physicians tend to recommend more testing of patients to ensure they know how to best support them, which helps to maintain the strength of the health care system,” TEA spokesperson said in an email. “Likewise, educators recognize the need to have more information about what students know and have learned, in order to help prevent a public health crisis from becoming a generational education crisis. The primary point of contention is whether there are any “stakes” associated with the result of student assessments, which is generally referred to as accountability.”

July 27, Governor Greg Abbott announced the waiver of grade promotion requirements for students grades 5 to 8. According to the press release, typically, the student’s score on the STAAR test determines whether they get to move up a grade level.

Stephanie and her Facebook group are sharing their survey findings with everyone who dictates education policy in Texas, hoping it makes a difference.

The group also came up with a list of concerns and put together a list of solutions for school leadership to consider. 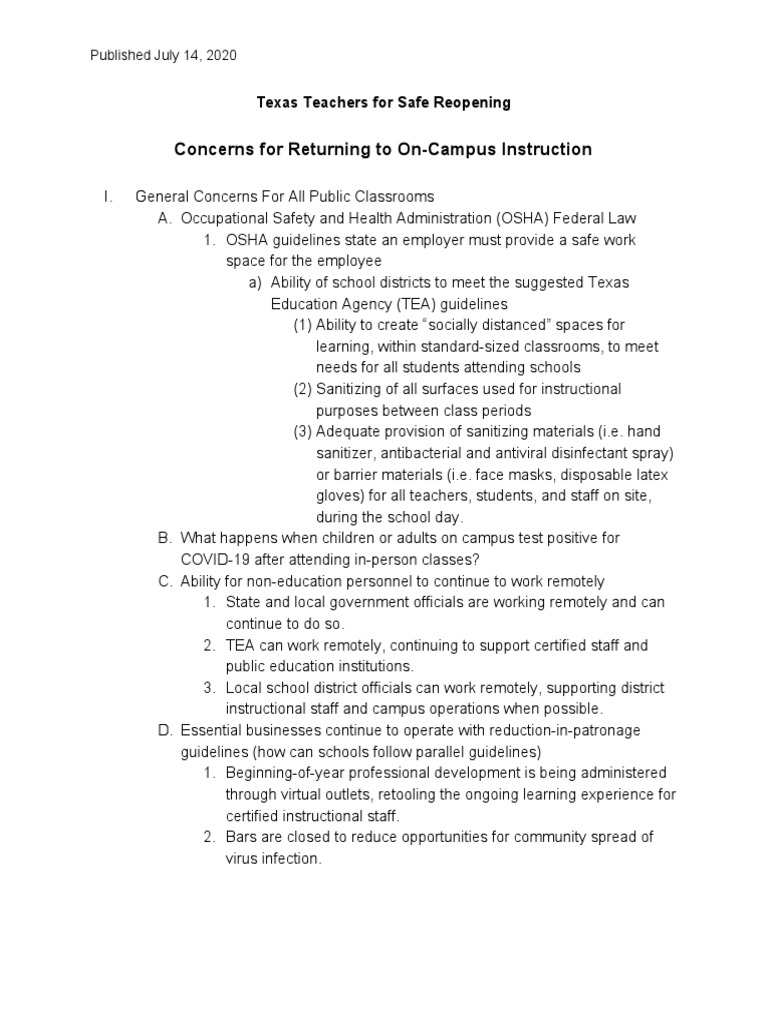 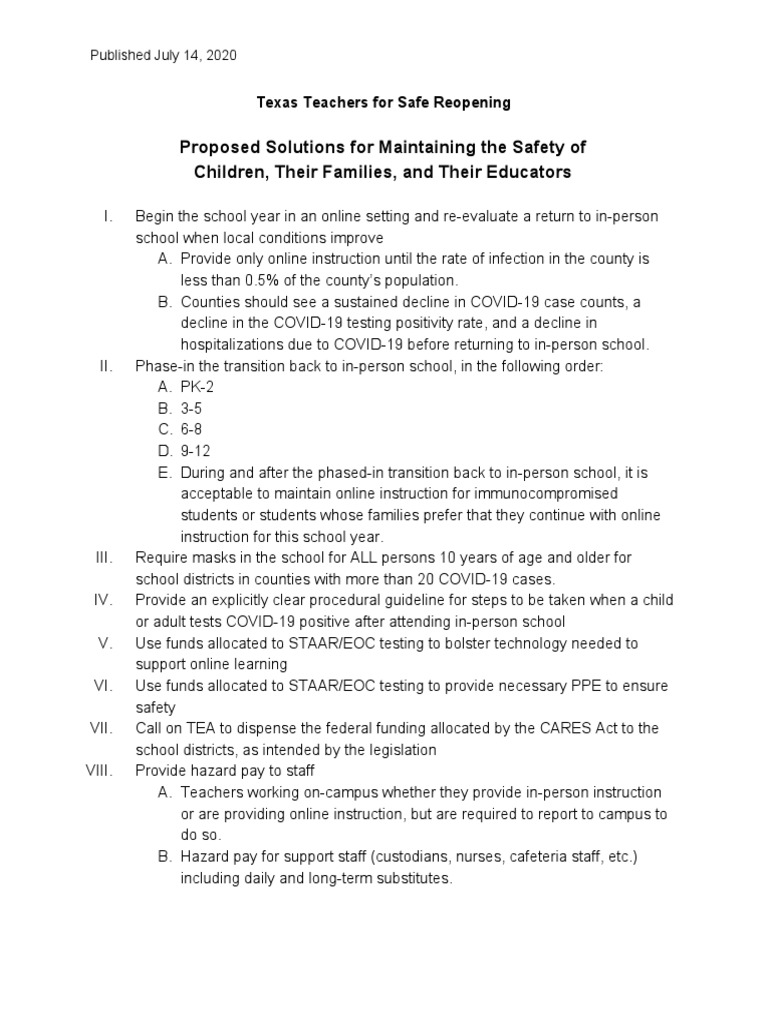 Texas Teachers for Safe Reopening solutions | Teachers | Special Education
Children, Their Families, and Their Educators I. Begin the school year in an online setting and re-evaluate a return to in-person school when local conditions improve A. Provide only online instruction until the rate of infection in the county is less than 0.5% of the county's population. B.

Stephanie said she’s already heard of some teachers quitting. When asked if Texas had enough teachers for some quit, she said no.

“Who’s going to teach the kids?” I asked.

Stephanie said she’s going to stay on board.

“This is my calling, my vocation, and I feel very strongly about that," she said. "This is what I was meant to do.”

“A call out to our state officials, both the governor and the Commissioner of Education,” Stephanie said. “Do the right thing. They have the data, they’re being fed the data by the county health departments, by medical professionals in all of the communities that are hardest hit. They need to make the call. They need to do the right thing. One life lost is too many.”

This week, Centers for Disease Control and Prevention released some guidance for schools for fall of 2020.

Editor's note: A previous version of this story noted that, according to the Texas Education Agency's website, local and state health departments had the general authority to close schools for health reasons. At the time of our original publishing, that information was published on the TEA website. The following week, the website changed to remove that language, so we removed it here.