On Monday, the superintendent for La Vernia ISD addressed parents at a school board meeting to inform parents of new measures the district plans to enact to better protect students. 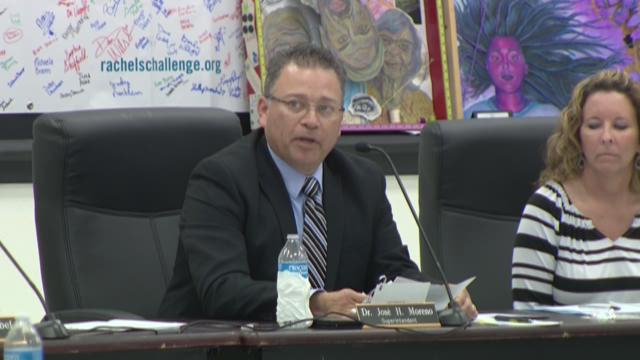 On Monday, the superintendent for La Vernia ISD addressed parents at a school board meeting to inform parents of new measures the district plans to enact to better protect students.

The district also announced that it will move forward with an internal investigation, all after disturbing allegations of sexual assault that have led to the arrests of 13 student athletes.

“At all times, know that we are deeply committed to protecting the safety and well-being of our students,” La Vernia ISD superintendent Dr. Jose Moreno told the crowd.

That was just part of a prepared statement Moreno read to parents. However, it did little for Stephen McNeil who was the only parent to address the board. He expressed his disappointment with the district for what he believes is a lack of transparency.

“Right now that’s all we have, is [the news media] and social media, because nothing is coming out of LV ISD,” McNeil said.

McNeil’s kids aren’t even in high school yet, but he said that explaining the sexual assault allegations to his fourth- and sixth-grade children was not easy. And yet, it’s the talk of the town.

The district also announced new measures to better protect students, including counseling for students, a La Vernia police officer on campus at all times, and a program that allows students to anonymously report any bullying, violence, or harassment. On top of that, the district said that it can now start an internal investigation, which would include interviews with students and employees.

Dr. Moreno said that the Texas Rangers had guidelines that previously prevented the district from starting any internal investigation.

“Right now, we’re going to provide due process to every single employee. We’re going to make sure that we have the facts before we take any steps forward, but that means we’re going to be thorough,” Dr. Moreno said.

When asked if he thought a teacher or coach must have known something, McNeil said, “I don’t see how they couldn’t have. And if they didn’t, they should have.”

The superintendent said that the Texas Rangers are still investigating students at the high school and added that there's always a possibility for more arrests in the case.