“It doesn't matter what condition you may have. It's fixable.” Here I was Special Ed in school and now I'm here teaching you,” Mr. Terry White said. 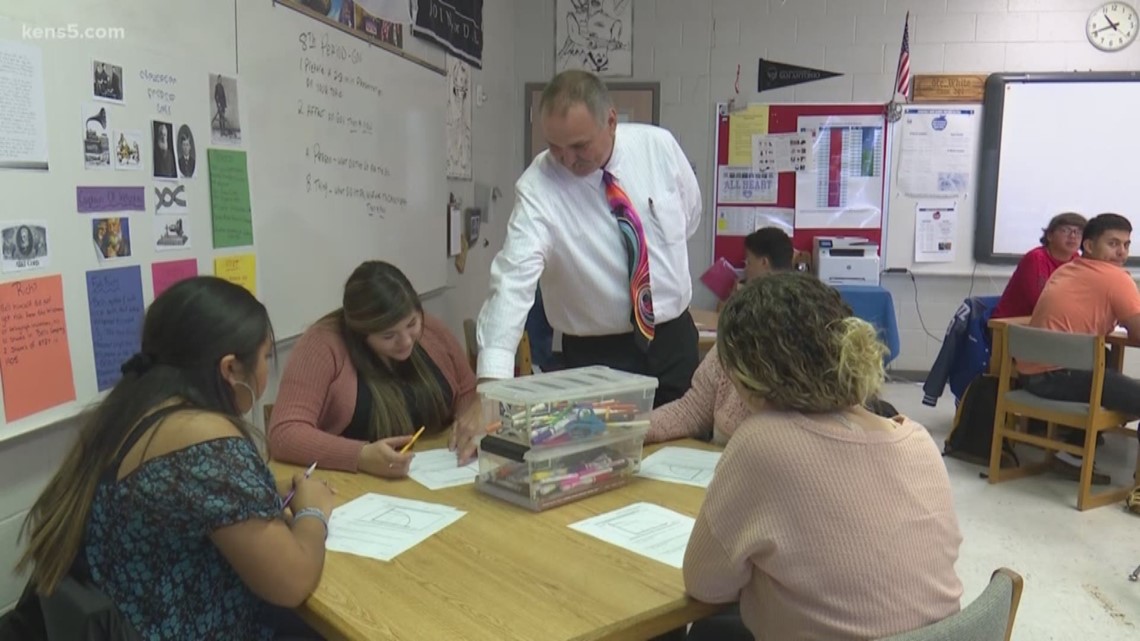 SAN ANTONIO — “It doesn't matter what condition you may have. It's fixable.” Here I was Special Ed in school and now I'm here teaching you,” Mr. Terry White said.

White has only been teaching at Somerset High School for 6 years but it didn't take long to get noticed on campus. He’ll tell you life is about what you’re willing to bring to the table, determination, and taking a chance, despite what you may see as a disability.

Mr. White walked into a full gymnasium with a big smile on his face as he watched the band play, cheerleaders dance and students greeting him while our KENS 5 cameras filmed the surprise.

He knew he won the EXCEL award but had no idea everyone was there to celebrate him.

The music, the kids, just pure joy, and all of it couldn't be more different than the life White was living just a few years ago.

“I started out as a washboy washing trucks, worked my way up all the way into sales then moved on to general electric,” White continued, “yes I made decent money but I don't enjoy what I'm doing and it affected my family. It affected my health.

White says he was unhappy and at an unhealthy 360 pounds.

"I just really wanted to sit down and think what did I always want to do? "

He would not be defined by his circumstances. He dropped 140 pounds and faced his fear of returning to college.

"Special Education all the way through school because I'm very dyslexic. I didn't learn to read until the 4th grade."

He barely made it through high school and had dropped out of college. For as long as he could remember school was his biggest struggle.

"Let's try it and see what happens and here I am."

Here he is living his dream and teaching U.S. history, government, and economics to Juniors and Seniors.

"I am so incredibly proud of him I will never forget the day that he finally decided to pursue that goal," Terry's wife, Dawn White, said.

Not only did White complete a Bachelor's degree in History, from Texas A&M University-San Antonio but he was also inducted into their Honor Society. He’ll be the first to tell you, times were challenging.

"I had to take remedial math all the way through college. I had 5 semesters of math just to finally pass that college algebra class."

It's his raw honesty in the classroom his students admire most. He’s not ashamed to open up to his students about his weaknesses.

"They kind of take it in but a month or so into school I start getting questions. Did you really struggle in high school? , White added, "When I make mistakes writing on the board, hey Mr. White, you got those backward. Yeah, I did. I messed it up. Help me fix it."

For two of his students, Carmen and Destiny, there is something else that makes their teacher standout.

"I used to wear K-swiss and then I saw Mr. White wearing them and was like oh he brought them back."

“I just started filming him.  I put Terry Rocking the K-Swiss"

And thanks to her Snapchat, everyone in Somerset knows it.

"And now I have people stopping me randomly and go hey, you're Terry Rocking the K-Swiss," White said.

Terry's also apparently willing to rock just about anything in the name of school spirit.

"He has better communication with us. He dressed up with us as well,” Destiny said, “he wasn't just like I'm not gonna dress up, it's boring. He likes to be one of us. Be involved with us.  Be a kid."

And it’s about teaching his kids, that they too, can do whatever they dream of doing, it just takes hard work and determination.

“You don't have to take your preconceived notion of what you're going to be in high school. You can be anything you want to be, it's just a matter of how do you get there?

White says he has even inspired some of his students to go to college and become teachers. They have returned to see him and keep in touch.

At the same time, Somerset ISD officials say he’s incredibly successful with more than 95% of his students passing the History section of the STAAR test.