Mr. Q decided to bring a bit of his life experience into the classroom. 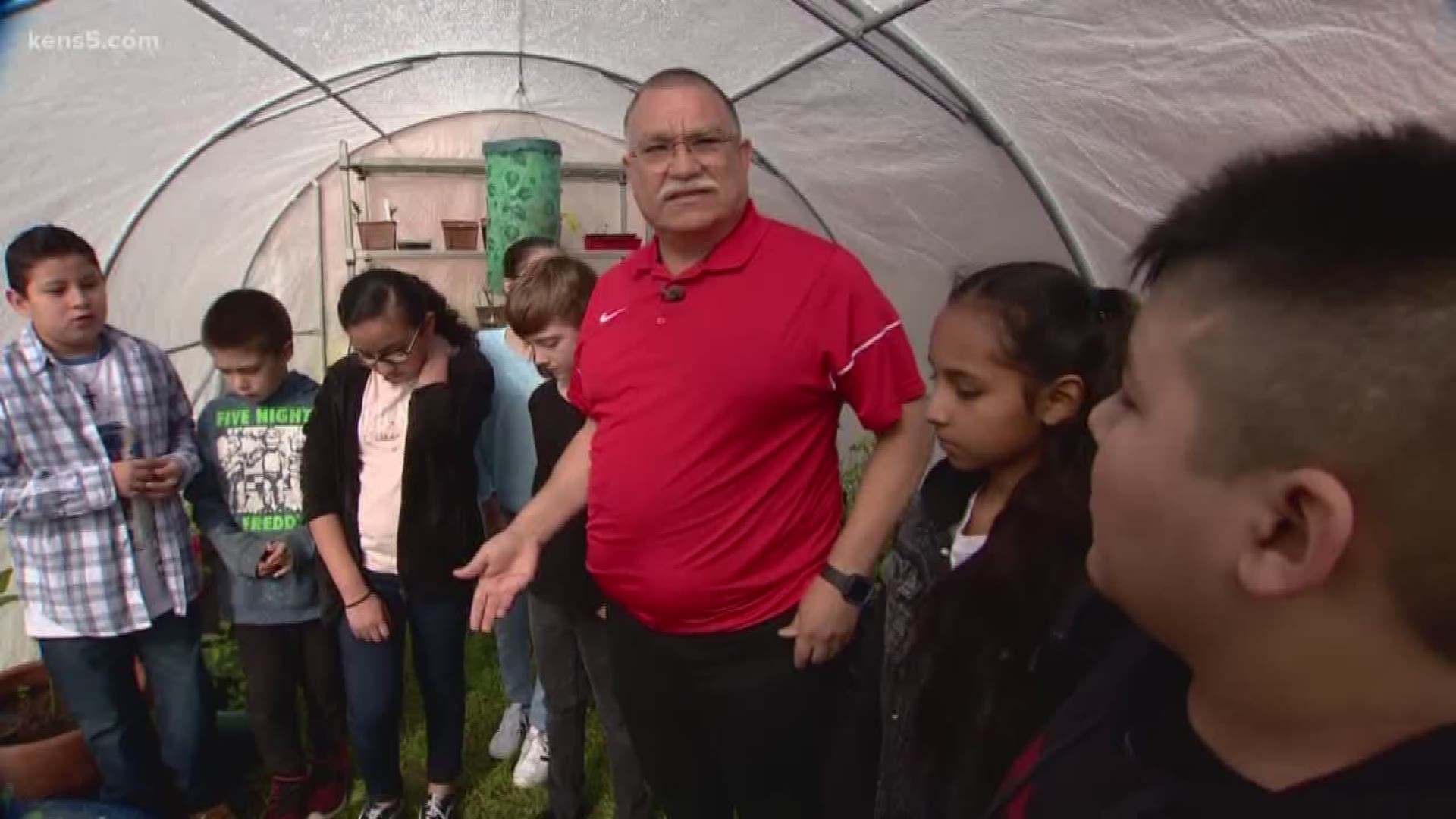 SAN ANTONIO — When you first walk up to Mr. Miguel Quintanilla’s classroom at Price Elementary, or Mr. Q., as the kids like to call him,  the room looks and sounds exactly as you would expect.

“Sometimes you have to do more than one step to solve a problem,” Mr. Quintanilla told his students as they watched him solve math problems on the board.

But in order to learn, sometimes, Mr. Q. says you have to step outside the box.

In this case, he led us outside the building where he showed us the grass is greener on the other side.

“This was one of our gardens from last year and we so had tomato plants that were here, and I think they produced like 120 tomatoes.  which did really well and we were just giving stuff away."

Between the school’s vegetable garden and the greenhouse, both made entirely by Mr. Q and his students, Quintanilla’s passion is deeply rooted.

"Down over there we have some Avocado trees that were grown from seeds inside the classrooms. On this side, we have Potatoes and Tomatoes growing."

Quintanilla’s family migrated to America when he was just 5 years old. He says as they moved from state to state to make ends meet, he was forced to drop out of high school.

"We spent our time working the fields in different states. Sometimes Florida, Minnesota, South Dakota, that's just what I grew up knowing.  And unfortunately at the time, we were growing up, you could work at the age of 10 so my parents had us working along them in the fields, picking the crops and working the fields."

His jobs for many years to come involved fieldwork and construction. Until one day, a car crash would change his life.

“I sustained serious injuries that required me to have back surgery. Having that back surgery meant I couldn't do all the work I was used to doing.”

Quintanilla, his wife and two children were returning home when a car slammed into their vehicle leaving him bed-bound for a year and struggling to survive.

But Quintanilla wouldn’t give up. And he decided to go back to school.

“I started working as a Special ED teacher in La Pryor, while I was taking night classes and summer school.”

He’s been teaching for 24 years now.

But when he started at Price Elementary 4 years ago, he noticed something that bothered him.

“Looking at the STAAR test results, looking at science tests, most of our kids do poorly and I started to look at some of the questions asked there, simple things like organisms and echo systems. When I looked at it, kids didn't understand a worm is a living organism."

Mr. Q decided to bring a bit of his life experience into the classroom.

Though his focus is Special Education, he started an all-inclusive class known as World Changers, teaching kids ways to end poverty and survival skills. In his classes, kinder through 5th, they learn all about agriculture and aquaponics.

“The second aquarium we have in the middle was the first project,” Quintanilla explained as he showed us the fish tanks in his classroom.

“We started out with some little goldfish and started to talk about the process and all a sudden it started to grow and everyone started getting interested,” He added, “If I can teach them a skill, and I show them look on Facebook. These people are selling these little trees for $15 what would $15 do for your family?

His students are getting hands-on experience applying it in class. They’re planting fruits and vegetables and sometimes even enjoying the fruits of their labor.

“We just put baskets out there after it's been rinsed and the kids were eating it like it's popcorn. it's amazing to see."

“He's really giving us a lot of information that we never learned before,” 5th grader Maribel Rangel said, "So he has given us this opportunity to take advantage of it now so we can learn more and teach others how to do this."

Quintanilla says his goal is to teach them to be sustainable and how to reuse and regrow different things so that it doesn’t take a lot of money and a lot of resources.

"It's very important because they actually get to see the process. they get to come out here and harvest. and that's a new word for them. for a lot of them they didn't understand the word harvest.,” Quintanilla added, “Even the word nutrients they didn't really understand what that meant. But introducing aquaponics and me bringing fruits to talk about it and doing research about the benefits of this and how does it help me or the environment, the kids are getting a better understanding of that.”

But at the end of the day, he hopes they take away one very important lesson… about helping others and growing up to become good neighbors.

“How can you change yourself so you can help somebody else. I tell the kids everything we are growing here, is not for you, is not for me, it's what can we do for our community?”

Quintanilla’s next project is using solar panels to teach the children about renewable energy.

“An off the grid system so we are not tied into the school electricity. We want the kids to see how renewable energy and alternative energy would work.”

He’s hoping a local business or anyone steps up to help them put it together.

If you would like to help with their Solar energy project: Contact Price Elementary and ask for Mr. Quintanilla.