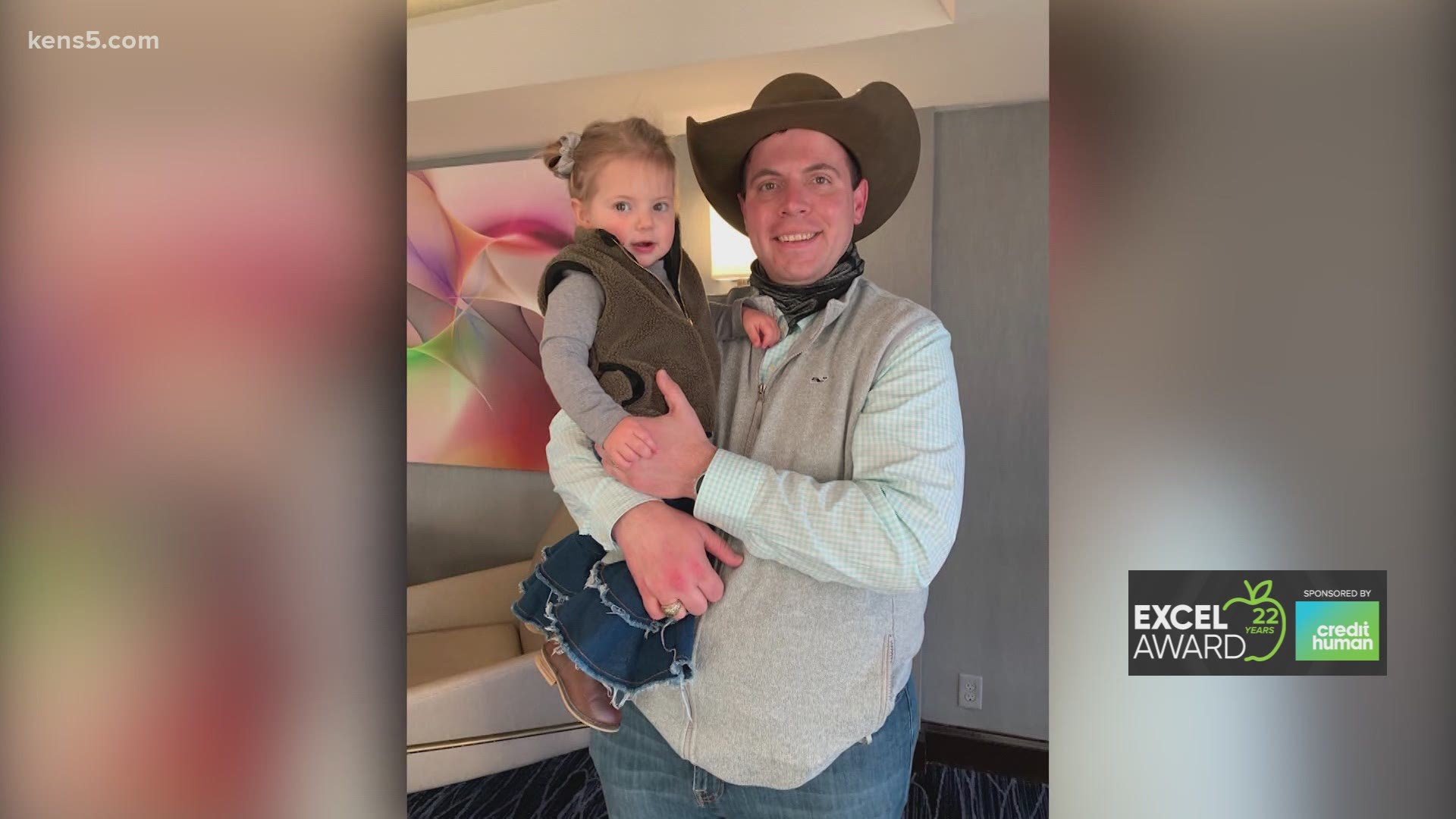 SAN ANTONIO — It’s a first for our Excel Award; in 21 years, KENS 5 has never had an administrator win, until now.

All of that happened as he fought a very personal battle. The community’s love and support for him shows why Comal ISD chose him as the KENS 5 Excel winner.

If there's a testament of admiration, just watch this video showcasing dozens of students.

It’s a show of support for Mr. Canaan Dreibrodt. And it’s not just students.

Smithson Valley High School Principal Mike Wahl is one of Dreibrodt’s biggest supporters. “He probably spends more time with these kids than their own parents do," said Wahl.

For years, Dreibrodt was an AG teacher at Smithson Valley High before becoming Assistant Principal at Canyon Lake High School and he had a special way of connecting with kids.

"Just understand and respect everybody in the classroom,” said Dreibroadt about connecting with students. “Understanding where they're coming from and try to get to know the students."

“He has such a legacy and lineage at Comal ISD,” Superintendent Andrew Kim added, “And certainly that distinguishes him even further.”

Dreibrodt attended Comal schools and was an AG student himself.

One of his mentors and Assistant Superintendent for Secondary Education Corbee Wunderlich says Dreibrodt  became an anchor in the AG department.

“I’ve followed him throughout his high school career when he was participating in FFA activities within our school district. “

And it doesn’t stop there.

“Mom was a teacher at Comal ISD for 25 years,” Dreibrodt said, “My dad is a farmer. The love for agriculture as an industry comes from growing up on a farm, and his dad before him was a farmer on the same dry brick road. I combined that with my mom being a teacher and so I became an agriculture teacher.”

Following in their footsteps, Dreibrodt returned to teach at the district and he brought some wild ideas. Among them, opening a new animal facility.

“Filling it with 60 pigs and dealing with all the families that partake in that and all the maintenance and upkeep.”

He also expanded the FFA program which opened doors to new opportunities for incoming freshmen, and made sure his students used the school barn as often as possible.

Preparing them for the San Antonio Stock Show and Rodeo was one of his special projects.

“My wife actually went through college all on a San Antonio Stock Show scholarship. So I have very personal experience to show these kids what they can be working towards," said Dreibrodt.

Knowing just the right things to teach is key, a process he said sometimes is more complicated than it seems.

“In terms of what to feed an animal and how you prepare them to look their best for show."

And the best did show up when it was needed most, but not in the way you might think.

Back to that homemade video, you see Dreibrodt’s students cheering him on.

“Know you’re in our thoughts and prayers,” said students in their homemade video.

Just one day before school started in 2019, Dreibrodt received the bad news from doctors.

“They said it was indeed cancer. It took the breath out of me"

He had surgery to remove a tumor in his salivary gland, and throughout the whole process, Dreibrodt says he continued to teach.

“Daily back and forth to Houston to get that treatment Monday through Friday for 32 days.”

He would fly or drive to M.D. Anderson every day for radiation then back to class the next morning.

When his insurance denied covering some of his treatment, kids, staff and parents alike, showed him they were just as committed to him as he was to them.

"The community stepped up and said no problem, we'll cover it for you."

They raised $200,000 in one week. "My Wife and I still look back on that with a humbled heart and how impactful and the impact I've had on the community that allowed people to open up their hearts and wallets to help me in time of need," said Dreibrodt.

The love came back full circle. And you could clearly feel the respect and admiration from his colleagues as Eyewitness News Anchor Sarah Forgany presented him with the KENS 5 Excel award including a $1,000 check from our partners Credit Human.

The good news didn’t stop there. Dreibrodt said at last check, doctors told him the cancer was gone.

A huge relief as his wife Mollie, sitting next to him told us they’re expecting their second baby.