When he’s not on the road with his family, you can find Ben Keenan pursuing his other great passion in this classroom. 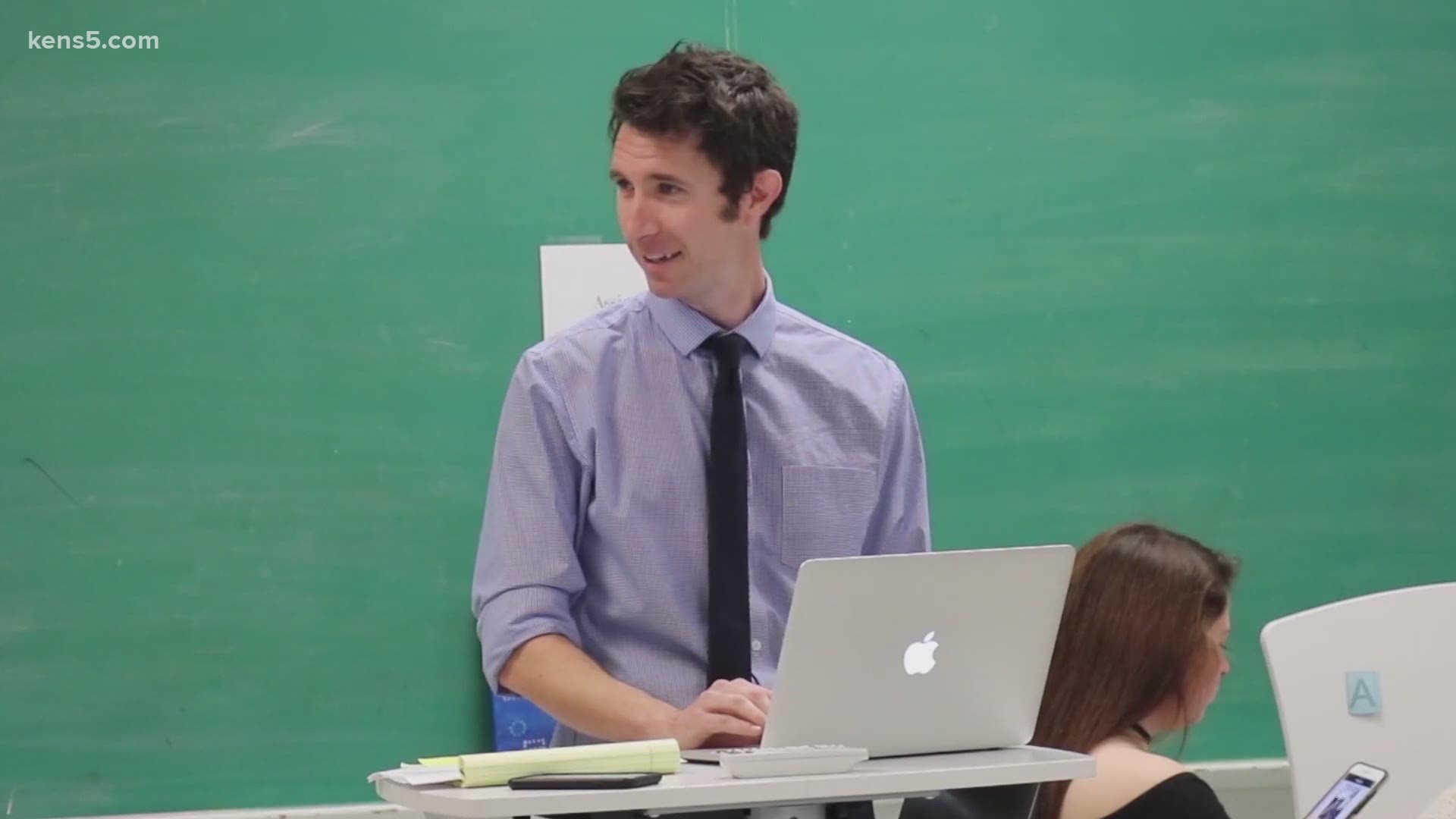 SAN ANTONIO — The way teachers teach and how students learn changed dramatically in the year 2020. But, at the end of the day, it all comes down to the basics.

Personal connections, making that lesson memorable when the day is set and done. If there is one teacher who knows how to do all of those things, it is Mr. Ben Keenan. He seems to have mastered the language and he is this week's Excel winner from Alamo Heights ISD.

When he’s not on the road with his family, you can find Ben Keenan pursuing his other great passion in this classroom

“I think most of us are here. it’s 9 o’clock so I’ll honor your time,” explained Keenan while standing in front of a green screen on the computer.

Keenan knows how to make every minute count

“I just want to mix it up a little bit and get out of this little box that teachers have been in, google meet.”

In his 13 years at Alamo Heights High School teaching English, 2020 has proven to be unlike any other.

Alamo Heights ISD Superintendent Dana Bashara says Keenan says If anyone knows how to connect with kids, Mr. Keenan gets it.

“I really appreciate the fact he makes learning relevant for them, why it’s important In the real world," Bashara said.

Keenan will use whatever it takes to get his class’ undivided attention, using the green screen to reciting poetry and even television shows.

“For this year, I decided to start a little earlier on a lesson that I would’ve usually done later in the year and tried to find interests,” Keenan explained. “We are starting the year analyzing documentaries. Over the pandemic months there’s been so much content consumed digitally, just for entertainment purposes and now we’re adding analysis and scholarly research to it."

Obviously, it's not without its challenges as some of his juniors and seniors sit in class at their desks between barriers, others are at home, joining in virtually.

Mr. Keenan admits it’s a lot to juggle but he’s not afraid to ask for help and get his students engaged.

“I probably need a showrunner or producer just to simulcast everything. I have a device for comments, a camera for students at home, watching a lesson from another laptop.  With the occasional help from a student, it’s camera one, camera two, displaying a screen here and there. It’s camera 1, camera 2. Let’s check the chat line. Yeah it’s an adjustment."

An adjustment he’s taken on like a champ if you ask Principal Cory Smith “you know he’s cool, he’s funny, he’s relatable,”

“Not only is he a leader on our campus, he’s a leader across the district,” said Charlotte Dolat with A.H.S. “He really has his fingerprints on a lot of things that help drive and change within our district."

But, long before Keenan was driving things at Alamo Heights, there was that one person who helped drive him here.

“My first job in high school, back in my hometown was a gentleman who was an advertising executive and decided to open a book store, his name is Wyatt Young. Just seeing his pure joy with interacting with people and obviously his love for literature and reading and that kind of sparked something in me.”

Now Keenan says it's his turn to light that spark, no matter the circumstances.

“You can still find connections across the internet,” Keenan proudly added “I’m an English teacher so I have to pull Anne Bradstreet the poet. She said If we didn’t have winter, spring wouldn’t be as pleasant,” Keenan continued, “and so I am very much looking forward to whatever kind of spring we have post pandemic.