“It's such an authentic feeling of just reaching out and touching peoples’ lives." 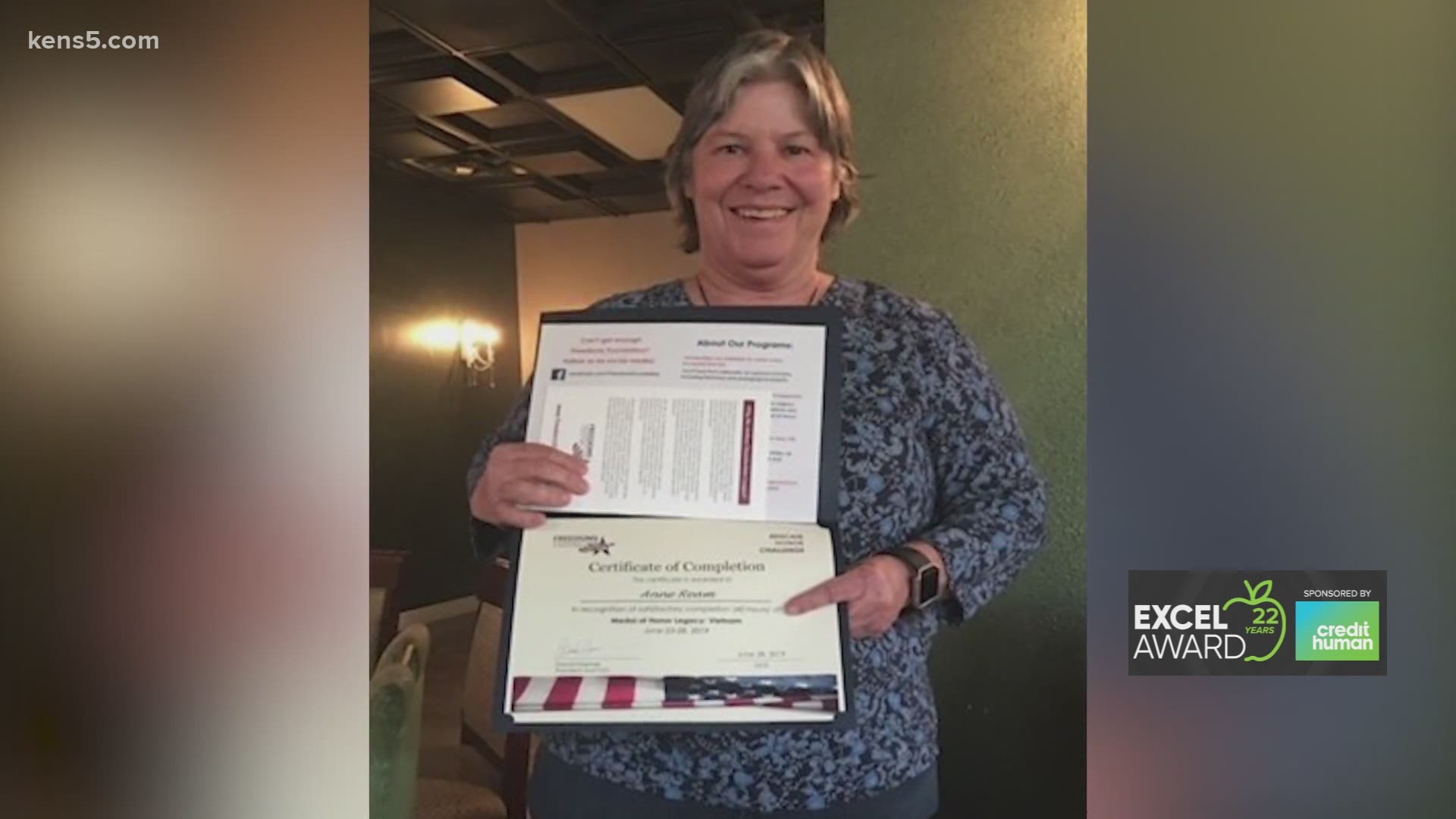 SAN ANTONIO — An Air Force Veteran is shaking things up at Wagner High School. She has her kids sitting on the ground, or in the trenches as they like to call them, learning about World War I and how to maneuver in no man’s land.

But that’s only the beginning for this Judson Independent School District history teacher, who is our KENS 5 EXCEL Award winner.

“It's such an authentic feeling of just reaching out and touching peoples’ lives," said Anne Ream. For her, teaching is not just a job. It’s personal.

"I sent this picture of me with a snowman and I said, 'Okay. Bring it on.'"

Her students brought it. “I ended up receiving 29 snowmen,” Ream said.

It was a snowman challenge to cheer up her history class while they were stuck at home during the winter storm in February.

“Then we had to look up the history of the snowman," Ream said.

She never misses an opportunity to teach a good lesson. Sometimes, it’s in a book. And other times, it’s a lesson in humanity.

"I had parents reach out and say, 'You have no idea the hardships they've been going through.'” Ream added, “A lot of my students here live in poverty. And the things I tell them is that you might live in poverty, but you are not poverty.”

Ream wanted to do more for her students. Some had lost electricity and others were without water. “My neighbor had put chains on his truck so we can get food and water to them,” Ream said.

Getting it done no matter what is how she always operates outside and inside her Wagner High School classroom.

She has her classes creating info graphics in a way they never thought they could.

“Look at this; this is crazy,” Ream said, as she excitedly showed us her virtual lessons via Zoom. “This is when we did the Mongols. Instead of reading it, they created this.”

It’s creative, but not easy. When her students begin to doubt themselves, Ream has a way of reassuring them. "One of my students said to me, 'I don't know if I can do this.' But what if you can? You know?"

As the saying goes, where there's a will, there's a way. That has been her philosophy since she was 20-years-old and joining the Air Force. “I learned all different types of jet engines, and there was one...it's a top secret program where they said it's a brand new engine coming out and it ended up being the Apache H-64. It was an elite group," said Ream.

She did face a few challenges, but nothing was getting in the way.

“They would say, 'You're a female and this is focusing on this.' And I said, 'Well watch me.'"

“Were there other females at the time? Or were you the only one?,” KENS 5 Anchor Sarah Forgany asked.

"I was the only one at that time,” Ream said.

She would go on to work in aerospace as a jet engine mechanic for years before getting a job with the Special Olympics as a fielding events trainer.

That journey would inspire her to go back to school at the age of 37 to get a degree and begin teaching. This was another accomplishment to her long roster of achievements. But out of everything, there is one near and dear to her heart.

“They only accept 40 throughout the U.S.,” Ream said about The Medal of Honor Character Development Program. "Working with the congressional medal of honor has just opened my eyes."

Ream has met many war heroes through this program designed specifically for teachers. "Actual recipients of the medal of honor, and it's very humbling. And bringing it back, because some of their stories you can relate it to our kids and it's heartfelt."

She returns to share with her classroom, focusing on character building, sacrifice and patriotism.

“She helps us with more than just school,” sophomore Caleb Dorca said.

Ream also designed a medal of honor program that was mass produced and sent to teachers around the country. But her work doesn’t stop there. She also coaches varsity softball and trains kids in physical fitness to enter law enforcement.

"I want to inspire them because that's what counts is them. And for them to walk out and to believe in themselves and to be able to endure whatever is thrown at them in life," said Ream.