Born without a hand, student's dream to play violin is fulfilled, thanks to Northside ISD staff

The ensemble worked together to create an apparatus that allows Kevin Vazquez to play the violin. 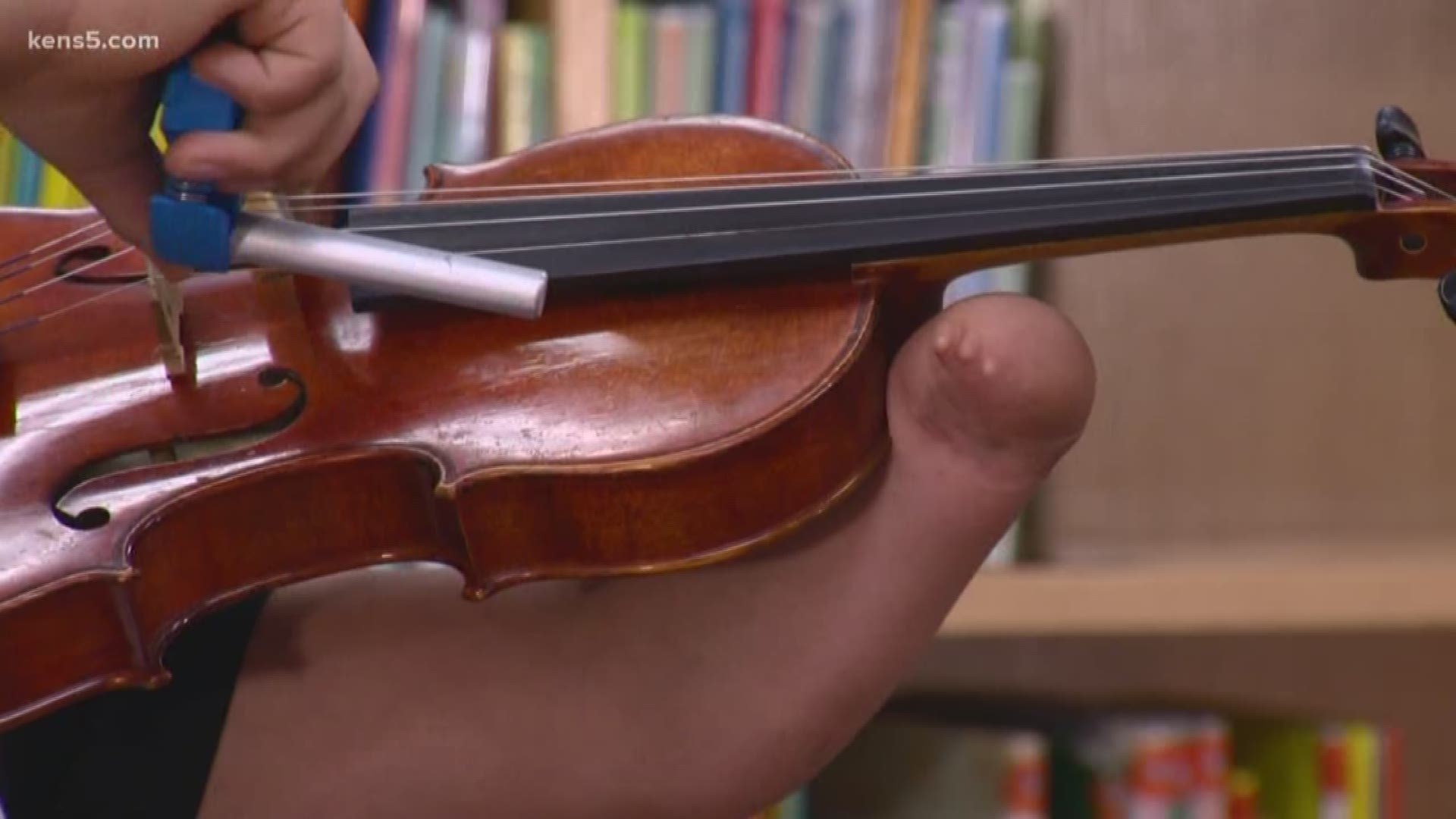 SAN ANTONIO — If you listen closely, you can hear music floating through the halls of Eduardo Villarreal Elementary School.

Kevin Vazquez picked up his violin Thursday to practice with his substitute teacher, Erik Garcia.  As they went through the chords string by string, Garcia encouraged Kevin through his mistakes.

The 5th grader just started learning how to play the instrument at the start of this school year, and said his passion for music started when he was younger and realized he could sing.

Music, Kevin said, has helped him overcome a lot in his young life. Including the death of his father when he was just 4 years old.

“When I'm sad, I sing—and that takes all the darkness from inside,” he said.

Kevin was born with out his left hand and has endured many years of teasing and bullying from his classmates.

“Since the beginning of the year, since I was in Kinder, people told me stuff about my hand,” he said.

His music teacher, Mary Ellen Fimbel, realized he might need some help learning to play the violin and found a template online that could help—a simple plan that could be created on a 3-D printer.

Fimbel reached out to the school librarian, Sandra Welzenbach, to see if she could use the school’s 3-D printer to create the device for Kevin’s bow to better help him use the violin.

“Once I looked at the information that was on the website, there was a lot more involved, including the flex material, which I couldn't do on our school printer,” Welzenbach said.

And that’s when the call for help went out to all of Northside ISD.

Kyle Baker, a grants coordinator for the district, accepted the call.

“I looked at it and I saw some areas that I thought the design could be improved to function a little bit better,” Baker said. “So I took his design and then modified it.”

Welzenbach said her husband also stepped in to help with the project.

“This is just one of those examples where the librarian, the music teacher, the grants coordinator, people from outside the district all just worked together to make this project happen,” she said.

Baker said the team put in over 150 hours to create the apparatus, and then they surprised Kevin.

“It was very emotional,” Welzenbach said. “For 10 years, he'd gone without, and just by providing him this apparatus, he now can participate in music, which is something he just loves.”

Garcia, who is now filling in for Fimbel while on maternity leave, said Kevin has become an inspiration to other students in the strings class.

“I have students that want to give up on the first try,” Garcia said. “It just shows no matter what, if you set your mind to something that you want to do, you can accomplish it.”

On Thursday, the team reassembled and presented Kevin with a new apparatus that will be easier for him to use.

“We took just whatever plans were provided to us and then went with it, and then we adapted, and I think we're going to adapt again,” Welzenbach said. “So we're still going to be changing until we get it to actually be comfortable and workable.”

It’s a project this team holds close to their hearts.

A project that allows Kevin to focus on his passion and gives him a renewed hope.

“Thank you for helping me, because this makes me a new life, a better one,” said Kevin.

He said he wants to be a police officer when he grows up, because he wants to help people.

But, for now, he’s going to focus on his mission, through his music.

“It tells me that I'm a good person and I'm helping people,” Kevin said. “Being a nice person feels good.”

A kid with a positive outlook on life, now teaching life lessons to others.

“He is a kid that is such an example of perseverance,” Welzenbach said. “You know, he's been born without the hand, and yet he didn't let that stop him.”

Welzenbach said they are now working with Kevin to make adjustments and advancements to the apparatus, so he can begin improving it on his own.

“Now we're saying, ‘OK, Kevin, if you want to play guitar, we can make something that can hold a pick. If you want to ride a bike, then we can work on getting that made for you, too,'” she said.

Because for Kevin, the possibilities are endless.

“I really want to have a robotic hand,” he said.  “I would want to have both hands. So I can, like, try a bunch of things.”