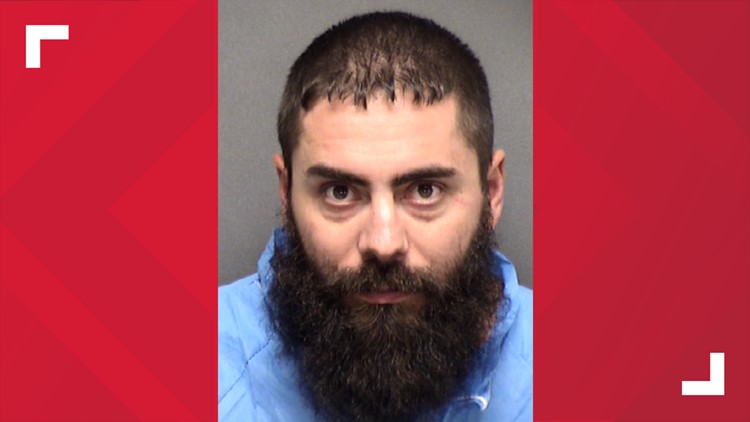 Photo by: KENS 5
Anthony Colvin is accused of following an off-duty officer.

SAPD officer fired his weapon at driver accused of following him

SAN ANTONIO — One man is behind bars after police say he followed an off-duty SAPD officer and pulled a gun on him.

According to a preliminary report from the San Antonio Police Department, Officer Alonzio Hardin requested a supervisor over the radio after leaving an off-duty job. Hardin told his supervisor that a man, Anthony Colvin, 34, was following him.

He also mentioned that Colvin got in front of Officer Hardin's car and kept slamming on his brake.

Officer Hardin said he tried to keep his distance while he called 911 on his phone and pulled into a parking lot in the 11500 block of New Sulphur Springs in the hopes that Colvin would drive past him.

However, several minutes later, Colvin turned around and drove up to Officer Hardin who got out of his car to find cover since he was uncertain of Colvin's intentions.

Officer Hardin said that Colvin began yelling racial slurs and pointed a black handgun at him, per the preliminary report.

Officer Hardin said that he immediately fired his duty weapon "in fear of his life" and may have hit Colvin who drove off.

The Wilson County Sheriff's Department stated that they had Colvin at their hospital in Floresville who had a gunshot wound to his left shoulder.

Colvin has been charged with two counts of endangering a child and one count of aggravated assault with a deadly weapon.

The SAPD Public Information Office issued the following statement in response to the incident:

“The off-duty officer was confronted by the 34-year-old suspect who pointed a gun at him. The officer fearing for his life, used his weapon and fired at the suspect in self-defense. The suspect was struck once in the arm. Prior to the shooting, the suspect was the aggressor in a road rage incident with the officer. The case is being investigated by the Officer Involved Shooting Team and the findings will be sent to the DA’s Office. The officer is on administrative duty pending the outcome of the case. The suspect was charged with Aggravated Assault with a Deadly Weapon and two counts of Endangering Child.”