Police have not released the suspect's name, but radio communications depict the 21 minutes before he was fatally shot. 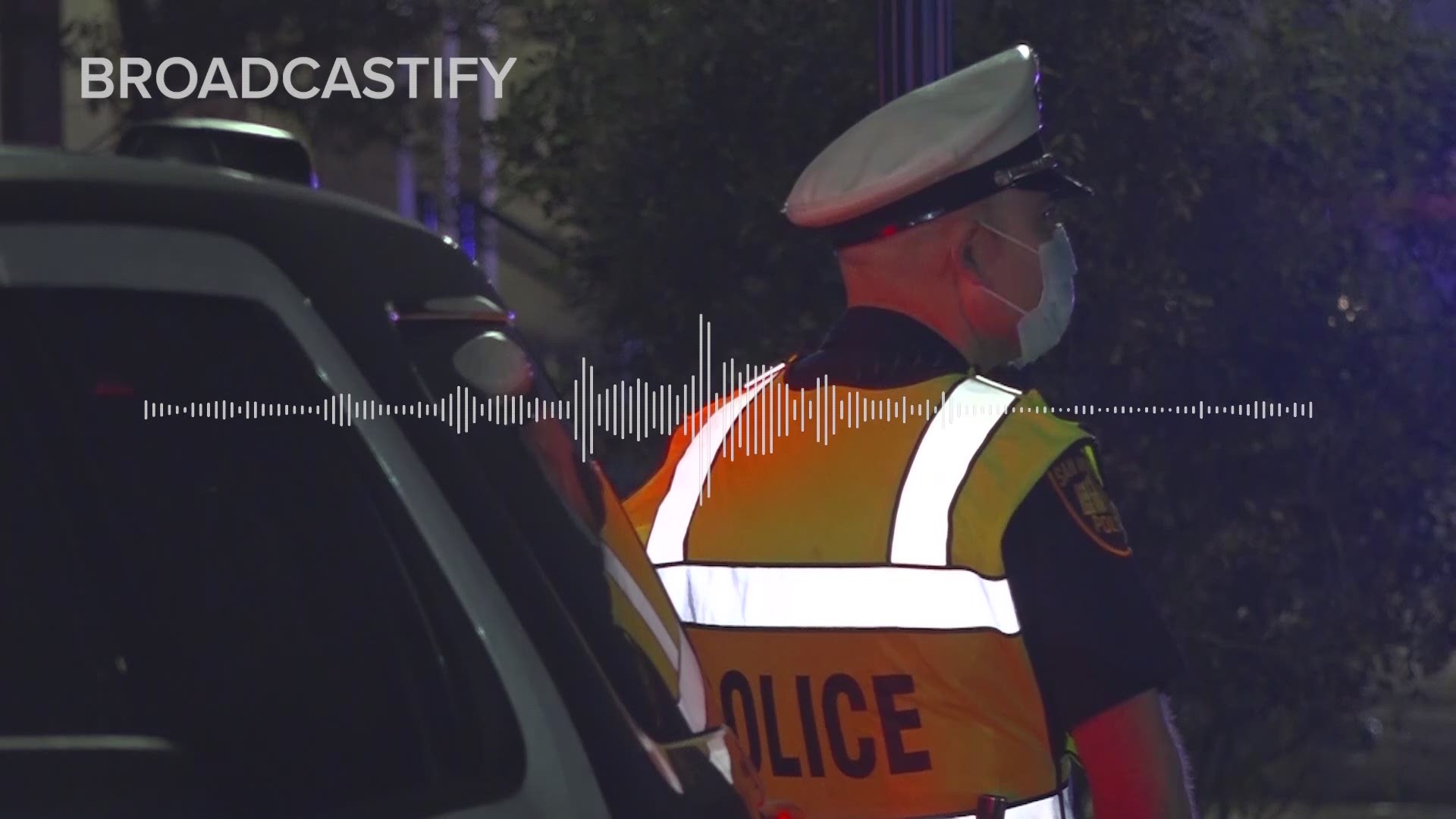 SAN ANTONIO — Three days after San Antonio Police officers shot and killed a man in the eastside Promise Zone, they have yet to release any additional details about how the incident started or what might come next.

However, the police radio communications from that deadly incident offer a chilling account of a situation that scared the neighbors and had police officers desperately trying to contain a man who was walking through the neighborhood with a gun, after being accused of shooting a man.

RELATED: Man killed by SAPD officers responding to shooting after he fired in their direction, authorities say

Time stamped audio recordings indicate that from the time the first police officer confronted the man until he was shot, just 21 harrowing minutes elapsed.

One minute later, a supervisor asks if there are any officers nearby with bean bag rounds that might be used to contain the man.

At 8:45 p.m. a supervisor said, “Have officers work a de-escalation program out there. Step back so we can slow this situation down.”

Before officers could set up a containment zone, they say the man took off on foot, wandering through the densely populated apartment zone covering Hudson, Lamar, Hays and Walters streets as officers can be heard trying to stop him.

Seven minutes into the incident, officers reported that the man fired a random shot and they needed more backup officers.

“The suspect fired once," an officer said. "He did not hit himself. He's still walking southbound. We need more units out here to shut down this whole complex out here!”

At 8:54 p.m., officers screamed at one another, “Watch out!  He’s coming towards you!  Watch your crossfire!”

As the man continued walking west on Walters, officers grew more frantic because people were coming out of their homes to watch what was happening.

“He's heading into this complex here," an officer said. "We're going to need to get him stopped!”

Several officers asked about the possibility of air support from the SAPD and DPS helicopters, but they were told both aircraft were grounded at the time because of weather conditions.

As the man continued towards a more densely populated space, officers became more insistent on containing him, as crowds of onlookers continued to grow.

“We’ve got to keep this guy from moving," an officer said. "We’re letting him walk around too much! We’ve got to cut him off!”

At 9:04 p.m., just 21 minutes after arriving, an officer screamed that shots had been fired and EMS was needed.

“Start me every CSI you have on duty right now because we have about ten officers involved," a supervisor is heard saying on the radio. "We're going to need to collect evidence from all.”

McManus said the man, who is in his 30s, was visiting the home of his children’s mother after having been involved in a custody dispute.  McManus said a friend of that woman was in the home as well, and was shot by the suspect. That shooting prompted neighbors to call police for help, McManus said.

The officers tried to use a Taser to subdue the man, according to McManus, but when the gunman shot at officers, they returned fire.

McManus emphasized that he had not had time to view the video from body worn cameras, and he said all of the officers who fired their weapons will be on administrative duty while the investigation continues. He said they have three to 19 years of experience on the force.

McManus said the woman and her children who were at the heart of the confrontation were fine. There is no update on the identity or the condition of her friend who was shot.

The Medical Examiner says they know the identity of the dead man, but they have not yet located his family so his name is not available at this time.