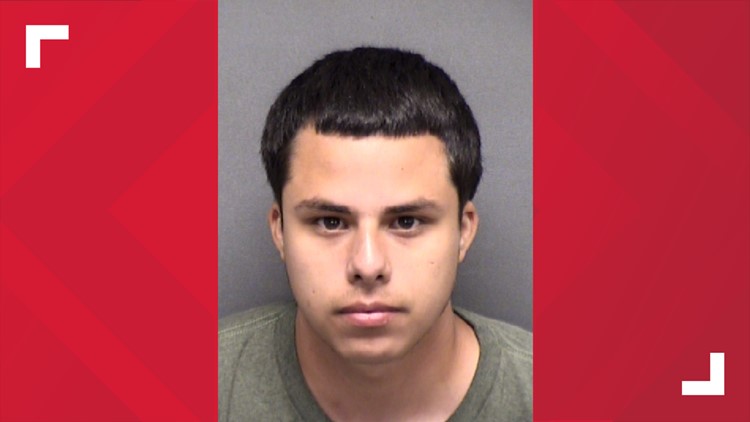 SAN ANTONIO — David Ezquerra, 20, has been arrested and charged with aggravated sexual assault of a disabled person after a 17-year-old girl with autism told police Ezquerra raped her twice in one day.

According to court records, the teen met Ezquerra a couple of days prior to the incident while walking in her neighborhood.

Ezquerra walked the teen home and they exchanged numbers. The teen saw which house Ezquerra went back to and was able to give the address to the police later on.

Days later, Ezquerra reportedly showed up to the teen's home and when she answered the door, she told police Ezquerra pushed her back and entered her home.

The affidavit for this case states that Ezquerra convinced the teen to go into her room.

She told him that there was a camera in the kitchen so he crawled on his hands and knees so that he wouldn't be seen on the camera.

Once inside the bedroom, Ezquerra pulled down the teen's pants and had intercourse with her, per the affidavit.

The teen told police that she told Ezquerra "no," but that he continued.

She also told police that she hit him, but that he refused to stop.

Once Ezquerra was done, the teen told him that her mom was coming home so he left.

A short while later, Ezquerra knocked once more on the door and forced his way inside the teen's home.

This time, the affidavit states that Ezquerra pulled the teen's hair and choked her while he had intercourse with her a second time.

After Ezquerra left, the teen called her mom and they called the police. After being interviewed by law enforcement, she was taken to a nearby hospital for a SANE exam.

The affidavit states that while doing research on the suspect, the investigating officer learned that Ezquerra was part of the STL gang and has been a suspect in several carjackings and shootings in the Prue road service area.

During a photo lineup, the victim picked Ezquerra out and told police she was 100% sure he was the one who had assaulted her.