Ben Crump said the bodycam confirms "a defenseless man was shot in the back when he had not disobeyed a single lawful command and posed no threat to the officer." 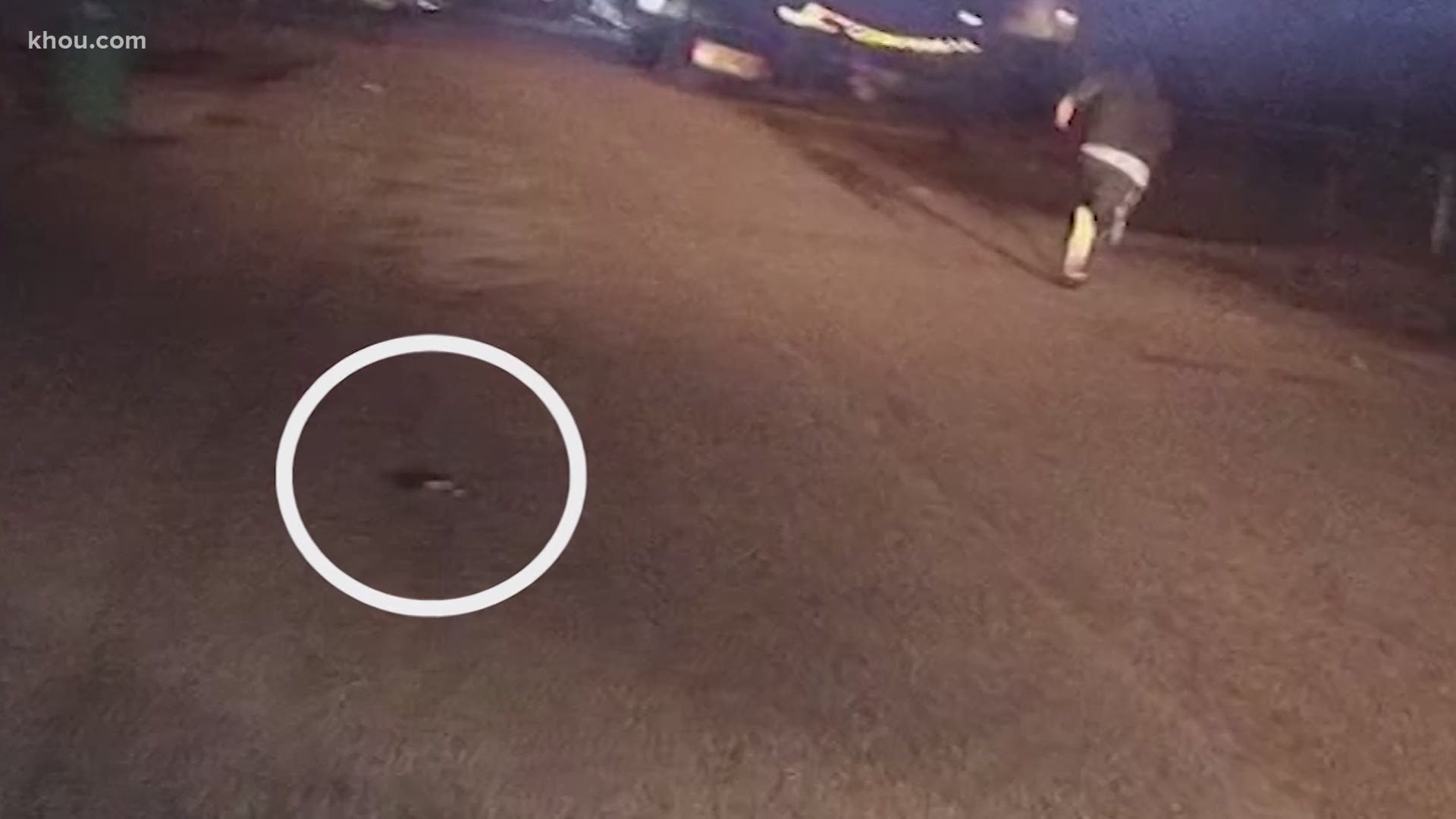 LA MARQUE, Texas — The City of La Marque has released five minutes of police bodycam footage of a deadly officer-involved shooting that happened on Dec. 9. That night, Joshua Feast, 22, was shot and killed by Officer Jose Santos.

IMPORTANT NOTE: We bleeped out profanities and blurred Joshua Feast while he was on the ground.

Investigators said Feast had been a person of interest in an ongoing investigation into recent shootings in La Marque. Feast also had two outstanding felony warrants, including felon in possession of a firearm and felony evading arrest.

La Marque police say on the evening of Dec. 9, surveillance identified a man believed to be Feast near a home on Pirtle Street.

Santos was dispatched to positively identify Feast and arrest him on the outstanding warrants, according to LMPD.

When Santos arrived, he saw someone he believed to be Feast leaning into the passenger side of a vehicle.

Bodycam footage shows Santos quickly exit his vehicle, pull out his gun and fire at Feast as he appears to be running away.

RELATED: 'He was a defenseless man' | Attorney says Joshua Feast's autopsy is in agreement with witness statements

"At the time the round was fired, Feast was positioned with his right back side toward Officer Santos," LMPD said in a statement.

The first 30 seconds of the video have no sound because "when Axon cameras are turned on, the system goes into buffering mode for 30 seconds," city officials explained.

But investigators said Santos called out to Feast, which we don't hear due to the buffering mode, and observed he had a weapon before firing one shot at him.

City officials claim that almost immediately following the shot, the handgun that Feast was holding fell to the ground. You can see something fall to the ground at about 30 seconds into the video.

The video then shows Feast running toward a house and then collapsing in the driveway. Feast could be heard on camera moaning as Santos called for more units.

Feast was seen on the video rolling around on the ground, appearing to be in pain from his gunshot wound. Santos told Feast to put his arms out to the side, but Feast didn't move.

"Talk to me, Josh," Santos said, but there was no response.

Moments later, a crowd started to gather and Santos repeated the call for more units. You can hear a woman screaming and a man yelling at Santos.

"Better get here quick, Step it up. Y'all, back up, back up!" Santos said.

Civil rights attorney Ben Crump, who is representing the family,  said the bodycam confirms "a defenseless man was shot in the back when he had not disobeyed a single lawful command and posed no threat to the officer."

He also accused the Galveston County Sheriff's Office of lying "in order to taint and twist the narrative in the press, offer a justification for Santos’ actions and untruthfully attack the character of the deceased, Joshua Feast."

We reached out to Galveston County Sheriff Trochessett who said the investigation is ongoing and they are still gathering evidence.

“Today, the City of La Marque released the video footage captured by Officer Jose Santos’ body camera on the night he shot and killed Joshua Feast. As we had previously suspected, Officer Santos didn’t give Joshua any verbal commands, but shot him in the back as he tried to run away. This footage portrays one thing: A defenseless man was shot in the back when he had not disobeyed a single lawful command and posed no threat to the officer.

What the video does not show is what was depicted in the story told to CBS News by Sheriff Trochessett, the head of the Galveston County Sheriff’s Office investigation. Sheriff Trochessett, when interviewed by the media two days after the shooting, stated that his investigators told him the video (which he said he had not seen at the time) showed Joshua Feast pointing a gun at Jose Santos before Santos shot and killed him. He also stated that investigators told him that Feast was running towards the officers before turning and running away. The body cam footage released today shows no such thing. There was no other officer on the scene at the time, so there is only one body cam video capturing the shooting itself. This leads us to conclude that members of the Galveston County Sheriff’s Office—who are responsible for investigating the actions of this officer absent bias or predisposition—instead lied regarding the evidence revealed by the body cam video in order to taint and twist the narrative in the press, offer a justification for Santos’ actions and untruthfully attack the character of the deceased, Joshua Feast.

If there is any other footage that supports the claims of the investigators as stated by Sheriff Trochessett, it has not been shown to the Feast family nor released to the public, and should be immediately. Otherwise, we are left withat is right in front of our eyes.

Because it is clear that the Sheriff’s department cannot be trusted to evaluate and relay the evidence truthfully and impartially, we demand oversight from the Texas Attorney General and an independent investigation from the Department of Justice.

The body cam footage, which LMPD has had since the night Joshua Feast was killed, documents not only a senseless shooting but an officer who refused to render aid to a dying man. Given those facts, coupled with Santos’ propensity to use excessive force against Black people as evidenced in the 2013 video, it’s outrageous that Officer Santos’ employment still has not been terminated, and it’s a disrespect to the Feast family, citizens whose rights law enforcement has a duty to protect. Santos should be fired immediately for gross misconduct and charged for the killing of Joshua Feast.”

Crump earlier said an autopsy commissioned by the family revealed Feast suffered a single gunshot wound to the upper right back, an injury that is said to be consistent with the accounts of witnesses who said Feast was running away.

"He was a defenseless man who was running away," Crump said. "There was no reason for [Santos] to shoot and kill this young man, who had only turned 22 three weeks ago."

Crump has called for the firing of Santos, but city officials say no employment action can be taken against Santos until an investigation is complete.

"There have been calls from the community for the immediate termination of Officer Santos," said La Marque City Manager Tink Jackson. "If we were to take an employment action on any officer in an officer-involved shooting, or to even begin the administrative investigation before the Sheriff's Office investigation is complete, we could jeopardize the criminal investigation. There is a manner and process in which any personnel actions must be taken, so they comply with the law. That takes time. We ask for your continued patience."

Days after the deadly shooting, dozens of demonstrators marched from a local food market to the steps of La Marque City Hall, demanding the firing of La Marque Police Chief Kirk Jackson and Officer Santos.

“What happened to Joshua Feast is a symptom of what has been occurring here, the lack of relationship that the La Marque police department has with its citizens here,” NAACP Dickinson member Madalyn Salazar said.