With COVID-19 numbers once again on the decline, local venues like Magik and Woodlawn are as confident as ever that audiences are ready to return. 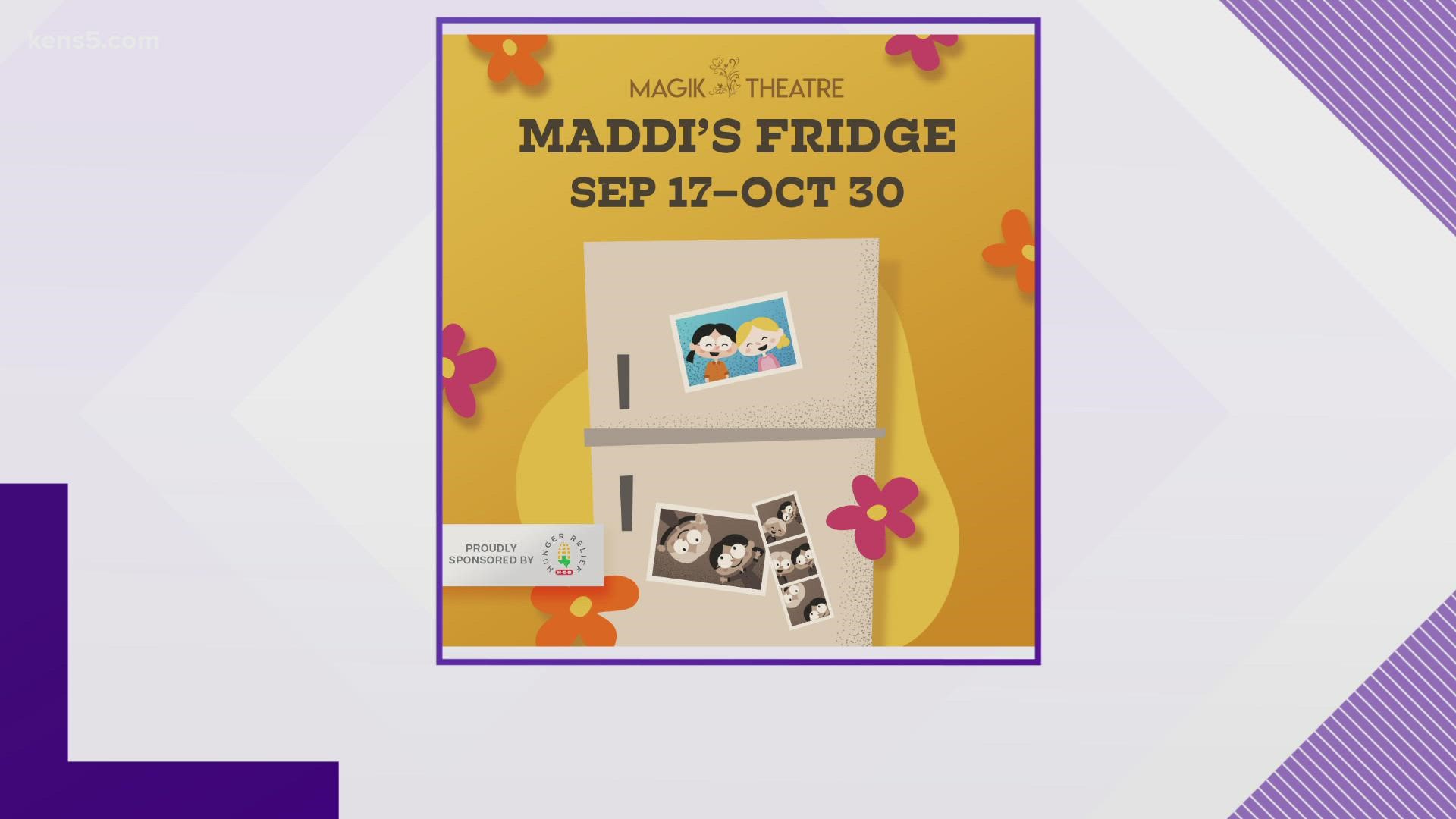 SAN ANTONIO — Nearly two years after he arrived in San Antonio to start his new job as artistic director at Magik Theatre, Anthony Runfola is finally getting into the swing of things.

“It feels great to actually be doing what I came here to do: Putting together the shows and actually planning the shows for a year from now,” he said.

With the number of vaccinated individuals steadily rising and daily tallies of new COVID-19 infections steadily dropping (the seven-day average of new cases dropped to 600 on Monday, down from nearly twice as many a month ago), the pandemic is once again loosening its grip in Bexar County. Accordingly, community theatre groups are ramping up their fall/winter schedules of shows, bringing a steady and stronger beat back to the pulse of local performing arts after a year and a half of productions that were either livestreamed or shelved entirely.

But the finger on that pulse is still a cautious one, with one eye on preparation and another on the latest coronavirus developments. At the same time as they’re welcoming families back to their respective venues, officials with the Magik, Woodlawn and Public theatre groups say they’re still operating at varying levels of limited capacity, among other safety measures.

Earlier this month at the Public, “Tick, Tick...BOOM!” kicked off a six-show season and will run for six weeks, compared to the venue’s traditional four-week schedule. Chief Development Officer Jeff Morden said that’s to compensate for a 50% audience cap, which remains in place for now.

“We’re cautiously optimistic, because our season this year is still only half of what we typically produce during the year,” Morden said.

Just down the street at Woodlawn Theatre, rehearsals for “Cinderella” hit the home stretch at the same time as the delta variant was giving the pandemic new runway to continue. In addition to asking parties to skip seats and strongly encouraging face coverings, Executive and Artistic Director Christopher Rodriguez said Woodlawn implemented more safety protocols for the crew as they marched on towards a late-August premiere.

The show went well, Rodriguez said, but even with an operating capacity of 75%, the caution on the part of the community was plain to see as San Antonio crested a third wave of the pandemic.

“Normally all our fairy tale shows are very family-oriented with kids, and with just the craziness of what’s going on (and) with kids not being able to be vaccinated, with school starting, we just didn’t have as many of those families come to our production,” he said.

Woodlawn is keeping youth safety top of mind as it now continues with a kids’ production of “Cinderella,” ensuring they wear masks while the young performers take advantage of the theatrical scope not normally afforded to them.

“What’s great about our kid’s program is when we’re able to tie it into our mainstage show we give kids the opportunity to utilize a big wonderful set, have some great costumes, give them a full experience of a show,” he said, adding Woodlawn is still planning to conduct youth productions of “Godspell Jr. and “School of Rock,” which the pandemic forced on hold. “The kids are super excited to finally be back on stage and in costume.”

At Magik, youth safety is even more of a priority, given children are the group’s primary audience—and also the demographic not yet able to be immunized against the coronavirus.

As the group continues a season-starting run of the show “Maddi’s Fridge,” capacity remains limited to 30%, temperature checks are still being conducted at the door and masks are required when not at your seat. Select shows will also continue to be streamed online.

“We’re just trying to be mindful of the fact that our primary audience does not have the vaccine available to them yet,” Runfola said.

But even as local theatre groups keep one foot rooted in the ever-evolving situation of the present, they’re also happy to start looking ahead. For many, the ability of productions like “Cinderella,” “Tick, tick...BOOM!” and “Maddi’s Fridge” to bring humor, music and warmth back to San Antonio stages means creating new ways to help the community move forward.

For example, the organization of “Maddi’s Fridge” – about a girl stepping up to help her friend after discovering her empty refrigerator – was anchored by a collaboration uniting Magik with H-E-B and the San Antonio Food Bank in an effort to collect donations for hungry San Antonians.

It’s as fitting an initiative for the show as “Maddi’s Fridge” is a fitting story to tell at the tail-end of a crisis which made national headlines for exacerbating the problem of food insecurity in the Alamo City.

“Theatre is a great way to raise awareness and start conversations on topics that may not come up otherwise,” Runfola said. “But also, for people who might be living with food insecurity, it may help them connect to resources they didn’t know were out there. I always think about that photo from the food bank with all those cars lined up just waiting for food. Sadly I think it’s always going to be a relevant topic, but I think even more so at the moment. And now that we’re back, I felt like I wanted to do something that did engage the community in a really significant way.

So, Magik is encouraging families coming to see “Maddi’s Fridge” to bring along some food as well. They’re specifically asking for peanut butter, cereal, tuna, beans, rice and other items you can find here.

The initiative continues through Sunday, with a goal of collecting 2,000 pounds of food.

Looking ahead, Magik will also be preparing to tell familiar fairy tales like “Snow White” and “Ella Enchanted.” But March of 2022 will bring the world premiere of a new on-stage story inspired by a beloved Texas princess: “Selena Maria Sings,” which Runfola began developing during his time at an Arizona children’s theater.

“It’s about her legacy, about the impact she had on the culture,” he said. “The playwright, Miriam Gonzales, was born and raised in Corpus Christi and was there in the ‘90s, so it’s a real personal story as well. That kind of connection to the community is what I hope we do more and more of here at Magik.”

True to its name, “Tick, Tick...BOOM!” ignited in-person excitement at the Public Theater for the first time in 546 days when it premiered on Sept. 10. But a stronger connection with audiences is also a new focus for this century-old organization, spearheaded by its newly hired executive artistic director, Claudia de Vasco.

While she didn’t play a part in organizing this particular season, de Vasco says she plans to prioritize diverse casts and stories which reflect the south Texas community, while also bolstering the Public’s outreach efforts.

“I found my way to nonprofit leadership, and that’s the point in my career where I realized I just wanted to find a way to bring together all the things I was doing into one mission,” she said. "So when I saw this opportunity, on top of it being Texas, which is home for me, I thought, ‘This is the perfect combination and the transition I was looking for.’”

The Public’s diversity initiatives have begun in earnest. At the onset of a 2021-’22 schedule, which includes “Plaid Tidings” and “A Bronx Tale,” the theatre group has modified its casting process in ways that “gave us the greatest ability to cast diverse performers,” as Morden puts it.

The Woodlawn, meanwhile, is setting its sights on a holiday-season production of “Elf.” But before that show hits the stage, the northwest-side theater group will tease other in-the-works projects with a Midnight Masquerade.

Sneak-peek events aren’t new for Woodlawn, but while they’ve taken the form of indoor galas in recent years, this year’s “smaller-scaled version” will be a more casual, outdoors affair at Paesanos 1604. The event is scheduled for Oct. 8, attendees are invited to arrive in-costume and tickets are on sale now.

“We know last year people didn’t get to have a lot of fun with Halloween and the fall season, so we thought this would be a great way to let people do that while also celebrating what we’re going to be doing for next season,” Rodriguez said. “We’ll be announcing a good chunk of what we have planned for the future in 2022.”

Woodlawn is otherwise staying patient in regards to announcing those plans. Rodriguez says that’s out of caution, given how badly the pandemic reared its head last winter.

“We’re going to use the next few months to kind of gauge how things are going, and if we need to adjust the season we can do that. But our goal is to have a great season next year and, hopefully, in January 2022 those season tickets will go on sale.”

It isn’t just Alamo City-based actors, set designers and directors drawing open the red velvet curtains to regularly filled seats this month. At downtown’s Majestic Theatre, a staging of the classic musical “My Fair Lady” brought Broadway back to Houston Street for the first time since the onset of the pandemic.

And though some may still be hesitant to invoke that N-word that rhymes with shormalcy, Vanessa Martinez, the Majestic’s customer experience director, hinted at her optimism by using a synonymic R-word.

“We’re slowly getting back into our regular schedule,” she said, “feeling out all of the ways things will work and proceed.”

Some big-ticket productions will grace the Majestic Theatre stage in the coming months, including multi-show runs of “The Lion King,” “Charlie and the Chocolate Factory,” and “Hamilton” between one-night visits from comedians and musicians. The venue was waiting on the green light from Broadway Across America as the national organization implemented ways to keep large touring crews safe.

“This was our biggest piece in getting our season back, so we’re really looking forward to getting people  back in the theater again,” Martinez said. “It was kind of a jolt to the system because everything shut down and we got used to everything being quiet.

The Majestic is emphasizing its own ongoing safety procedure. Like some of the city’s smaller venues, visitors must still bring their masks, but they also shouldn’t forget their credit cards if they want something at the bar.

Another thing Martinez says frequent Majestic visitors might as well get used to: Mobile ticketing, which the venue is continue to “migrate to fully” while making room to accommodate visitors who don’t have mobile devices.

Rodriguez was at one of those “My Fair Lady” shows, and while his theatre group is being more deliberate in its programming this fall, he said what he saw made him optimistic audiences are ready to return to those spaces where possibility blooms when the lights go down and attention is grabbed when the curtain is raised.

“I’m pretty hopeful. I just think it’s important for our community to not only support those big Broadway shows but also the smaller local theaters in town that are struggling, probably even more so than those bigger shows,” he said. “I think as long as they support big and local, that’s what’s going to be really important to move the arts forward in our city.”