Jackson Vaughn wants other kids to have the same opportunity to play the sport they love. 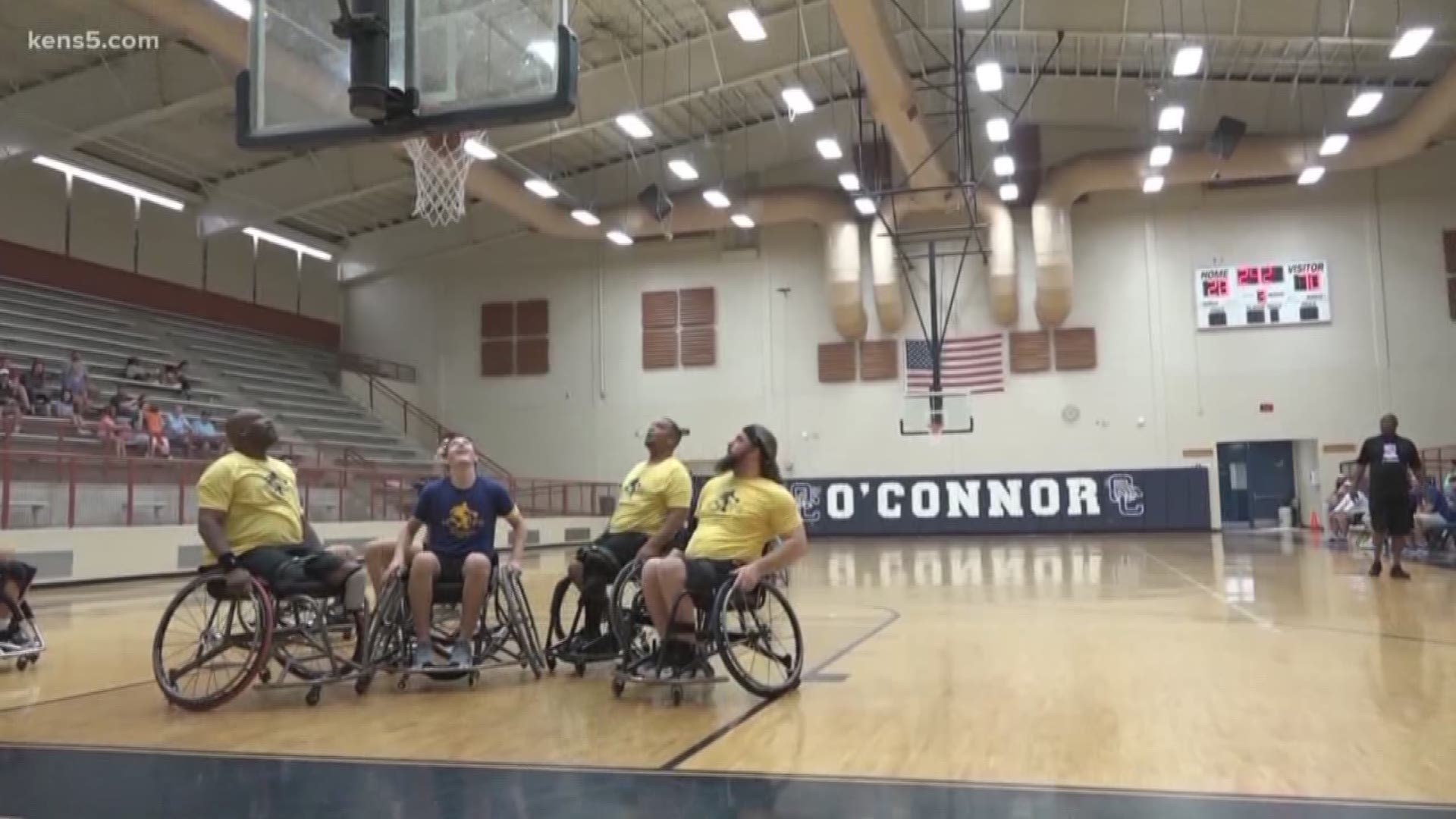 HELOTES, Texas — Good players inspire themselves. Great players inspire others. Those words, written on the back of game day T-shirts, was the theme at Saturday's basketball tournament at O'Connor High School.

People cheered in the stands as the ball was dribbled up and down the court, but this game was played a little differently.

To give the students a fair shot, the visitors gave them a 20-point lead to start. They also gave the students some pointers before showing no mercy on the court.

"It's a lot harder than it looks," Vaughn said. "Our shoulders are kind of sore and the blisters are forming."

Vaughn said he loves playing basketball and wants other kids to have an opportunity to play as well, no matter how they get around. With the help of his basketball coach, Brett Jewasko, he organized the event so that ticket and concession sales will go toward a sports wheelchair for a child with a disability.

"When I was younger, I would go to these Spurs games with my dad," Vaughn said. "During the halftime show, they had veterans come out in wheelchairs and start playing each other—that sprung the idea."

Jewasko said he was blown away by his young player's willingness to help someone he had never met.

"I mean, this is a 15-year-old kid. Jackson did a phenomenal job," Jewasko said. "It was kind of a role-reversal. I just listened to Jackson, he was telling me what to do!"

Being a coach, Jewasko was also thoroughly entertained by the game.

"Oh this is 100 times more fun than a typical practice or game for us," Jewasko said. "Our kids are having a blast and they're learning a lot too."

The wheelchair will be a gift for Izaiah Merritte, a 14-year-old basketball player who outgrew his old sports wheelchair. Izaiah wasn't able to make it to the game since he's home recovering from a recent surgery, but his father was there in his place.

A 17-year veteran, Merritte was hit by a roadside bomb while he was serving in Iraq.

"The shrapnel went straight through my foot," he said. "I've got nerve damage in both of them, messed my back up. I can still walk, but not for long distances."

Merritt started playing basketball in a wheelchair in 2010, three years after his accident.

"This kind of saved a lot of our lives being in the military," Merritte said. "After we got injured, it helped us a lot."

Merritte said this basketball tournament is also a teaching experience. They're reminding an entire community that the only thing you can control in life is how you play the game.

"I just hope people know, by watching these people, that they can get through the hard times in life," Vaughn said. "It's been a really cool experience. I hope I can do it again."

Through generous donations, the teen was able to hit his $3,000 goal. The plan is to present the sports wheelchair to Izaiah in the next few weeks.

If you're interested in learning more about adaptive sports, San Antonio Para Sports practices at Morgan's Wonderland on Sundays.

"We welcome everyone to come out and play with us," Merritte said. "If you have a disability and you don't know about adaptive sports, we would love for you to come out."

Merritte can be reached at merritte162@gmail.com.